Ban on pyramid schemes to limit fraud, exit of funds 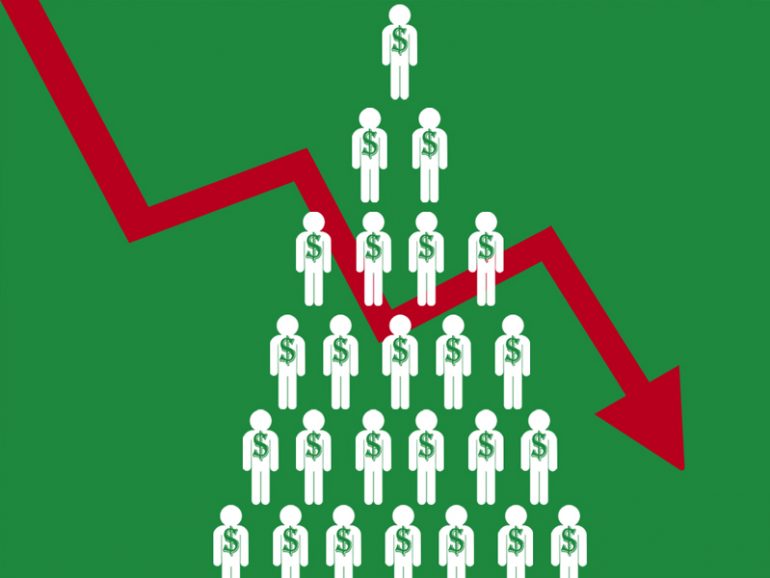 Multi-level marketing systems are considered illegal in many countries

The Ministry of Commerce, Industry and Investment Promotion (MoCIIP) has emphasised that the ban on selling, advertising and promoting goods, products and services via pyramid schemes will significantly limit commercial fraud. Besides deterring individuals from engaging in such practices, the ban will prevent monopoly of trade.

Among other names, pyramid schemes are also known as network marketing, multi-level marketing and hierarchical marketing.

Ministerial Decision No 105/2021 recently issued by MoCIIP aims at preventing such type of trade, which is considered fraudulent and criminalised under the Omani Commercial Law issued via Royal Decree  55/90 and by the Omani Penal Law promulgated by Royal Decree 7/74.

Dr Mohammed bin Rashid al Badi, acting director of the Legal Department in MoCIIP, said, “Pyramid schemes begin with an individual or a company at the top of the pyramid, whose work is to persuade people to buy a product or to subscribe it by

paying a certain amount of money. While subscribers are promised services or a symbolic profit if they can convince others to join their list, the biggest beneficiary is the one at the top of the pyramid.”

“Direct sales marketing is direct selling from a fixed retail site. Despite the popularity of direct selling in the retail trade, which is spreading in many countries across the world, it seems that there are different types of distributors of direct selling practices with different motives. Multi-level marketing, which is considered a part of network marketing, has a multi-level commission structure based on the volume of sales of quality products with competitive pricing,” Maha said.

She pointed out that sales representatives or distributors work for themselves and act as independent agents for reputed companies. These distributors sell to consumers, including themselves, thus this type of marketing is a legitimate form of direct consumer marketing.

“So multi-level marketing includes developing social networks such as family and friends groups that develop into business alliances.”

“The most famous companies in the context of network marketing (multi-level) are gaining very large proportions of the total direct selling revenues in many countries such as India and America,” Maha said.

She noted that the decision to ban sales through pyramid schemes will help control this type of activities; the decision will contribute to regulating the direct sales marketing sector in the sultanate as it also contributes to the country’s gross domestic product.

“The legitimate direct sales marketing industry has contributed to developing India economically. India linked it with the major initiatives launched by its government such as Make in India, Skill India, Startup India etc,” she said.

Explaining how pyramid schemes work, Nimit Ramaiya, senior consultant for Business Advisory Services at Crowe Oman, said these direct earnings from those on lower levels of an organisation to the top and are often associated with fraudulent operations. “In network marketing, the individual is asked for a low upfront investment for the opportunity to sell a product line directly to friend, family and other personal contacts,” he said.

Ramaiya informed that pyramid marketing practices in Oman exists mainly in cosmetics, dietary supplements, nutrition products, home care products, personal and lifestyle products. “Most network marketing businesses also ask participants to recruit other members for the programme where their sales generate income for those above them in the programme. A pyramid scheme, network marketing or multi-level marketing system in which most of the revenue comes from recruitment is considered illegal in many countries,” he said.

In the recent times, most of network marketing companies have relied on social media for recruiting. “Recognising the disadvantages, last year the popular social media platform TikTok banned multi-level marketing. Since the COVID-19 pandemic, many multi-level distributors have enticed new investors with promises of instant financial gains and the opportunity to work from home for the unemployed as well as employees looking for a side income,” Ramaiya said.

“The ban will help in accuracy of managing foreign trade data. In extreme cases, the collapse of pyramid schemes may cause large-scale defaults and threaten financial stability of the economy. Such schemes have even led to social unrest and violence. The collapse of such schemes would sour human relations and destroy trust,” he said.

Sameh bin Salem al Adawi, expert in network marketing, claimed the decision is timely; it coincides and is in line with Oman Vision 2040 to strengthen and develop the Omani economy as well as reduce the movement of anonymous funds. “The ban will contribute to limiting the exit of funds, reduce the transfer of unknown funds through bank accounts, limit the marketing of unapproved products, and contribute to controlling the prices and quality of goods in the local market,” he said.