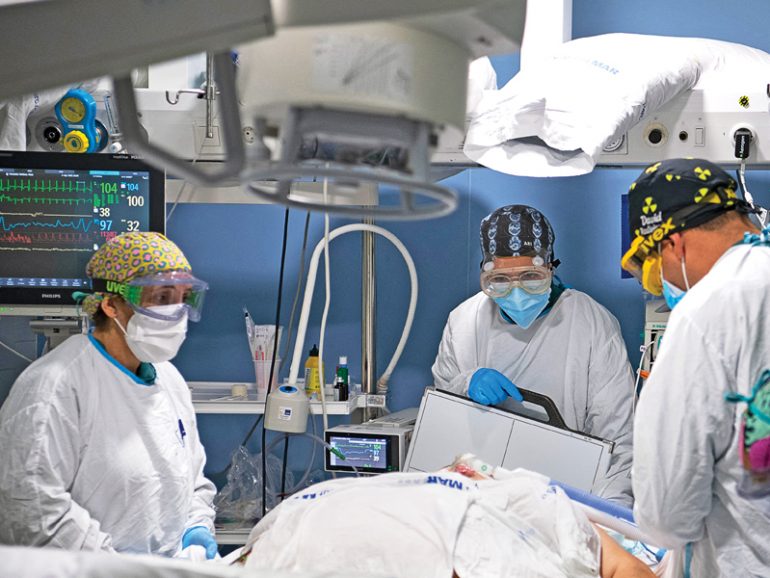 The COVID-19 pandemic created challenges for many, especially treatment cost for expatriates in private sector hospitals.

Mujahid, an expatriate who wishes to be identified only by his first name, had the worst experience of his life when his wife tested COVID-19 positive and was admitted in a small private hospital. As her condition rapidly deteriorated, Mujahid was advised to take her to a hospital with an ICU facility. The hospital he approached informed him that in-patient charges for an ICU bed would cost him RO400/day, besides a deposit of RO1,000 upfront.

When Mujahid said he was unable to bear the high fee, he was advised to go to the Field Hospital on the premises of the earlier airport in Seeb. But it being a referral facility, Mujahid’s wife was asked to go to a private hospital.

“When we approached the private hospital with ICU facility first, they looked at our appearance to gauge if we could afford the cost. That is why their first response was that they didn’t have an empty bed. When we insisted, they informed us that a bed had just become free and that they could admit my wife.”

Expatriate Syed Abdul Gaffar Turabi had a similar experience when he approached another private hospital with his COVID-19 positive father-in-law. He was told to deposit RO2,500 first, of which he managed RO1,000. After two days in ICU and three days of non-ICU treatment, he was handed a bill of close to RO2,500.

For Turabi, the upfront deposit before admission was not a surprise. “That is normal. I don’t expect hospitals to give free treatment, but during a pandemic, hospitals should subsidise as much as they can especially for uninsured and low wage earning expatriates.”

When Kishor Pednekar’s wife tested positive for COVID-19, initially her condition didn’t require hospitalisation. On developing mild breathing difficulty, he decided to take her to a private hospital where he was asked to deposit RO750. She was admitted for five days when her condition worsened and she had to be shifted to Khoula Hospital. Early in the morning on the eighth day, she breathed her last.

“If my wife was admitted in Khoula earlier, she would probably be alive today because her condition wasn’t severe when we took her to the private hospital,” Pednekar said.

“I really appreciate the support and treatment at Khoula, and they did not charge us even a single baiza for eight days of treatment. We would not have got the treatment we got at Khoula even in India. The only problem is that government hospitals are referral hospitals and we can’t approach these directly. But once admitted, they did not differentiate between citizen and resident. Khoula Hospital gave all the necessary treatment and tried its best to treat her.”

Komal Jhadav had a similar experience at the same private hospital where Pednekar’s wife was first admitted. When her husband’s condition worsened, the hospital asked her to find an ICU bed and shift him. “By the grace of God, we got a bed in the Field Hospital in Seeb.”

Thankfully, Komal’s husband had medical insurance, saving them financial hardship though they were asked to pay for a CT scan, some treatment charges and five days in the private hospital. All the treatment at the Field Hospital where he was admitted for 24 days was completely free. The Field Hospital advised her to shift her husband home for further follow-up treatment owing to negligible risk of re-infection at home.

During a virtual press conference held in April 2020, H E Dr Ahmed bin Mohammed al Sa’eedi, Minister of Health, said that Oman treats all patients irrespective of their nationality and that tests and treatment are free for all expatriates.

Following the outbreak of the pandemic in Oman, COVID-19 screening tests were done for all. Later, residents were asked to go to private hospitals for tests, and the Capital Market Authority issued a circular asking insurance companies to include PCR test and treatment in insurance packages creating a challenge for the private healthcare sector.

Speaking on condition of anonymity, an official of a private hospital in Muscat said, “The agreed treatment costs between hospitals and insurance companies are quite low. But COVID-19 requires multiple tests and expensive medicines for supportive treatment.

Insurance coverage does not even recover the basic cost of treatment and medicines administered by hospitals.”

He informed that this creates a ‘catch-22 situation’ for hospitals and it is why most private ho- spitals find a way to avoid insured patients and prefer cash patients. “Considering the high treatment cost, they ask for a big amount as an advance for their security.

“Currently most hospitals are filled with COVID-19 patients and not much is happening in the other medical streams in terms of treatment and billing. Besides, COVID-19 facilities require dedicated staff due to high risk of infection. So hospitals can’t use their COVID-19 staff for other services which adds to the running cost of the hospital.”

According to Varsha Sarah Roy, finance director of AdLife at Amerat, however, the hospital hasn’t turned back any patient, irrespective of their insurance status. “We ask for a minimal amount as advance. In many cases for genuine patients, we have admitted them without deposit, too,” she said, adding that some patients who were unable to settle the final bill have been allowed to pay in installments.