An SUV that’s a Ferrari at heart 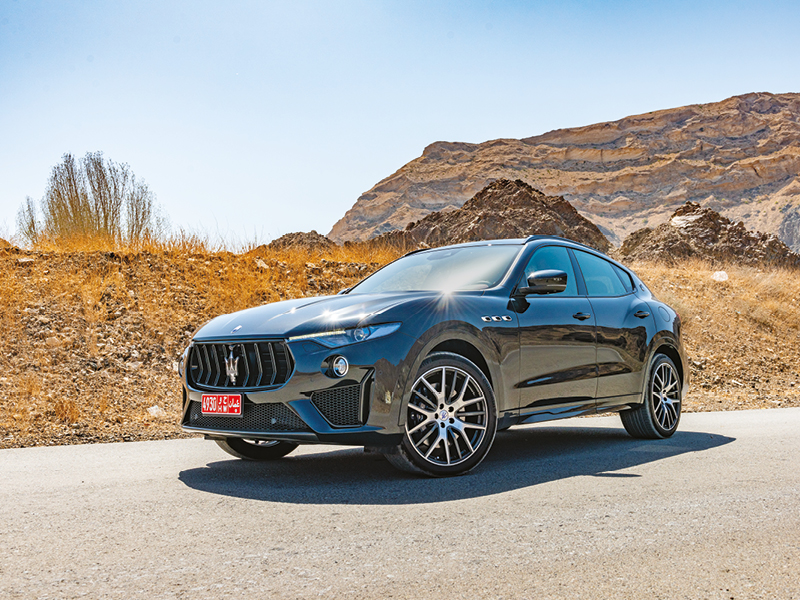 The Maserati Levante Trofeo 2020 has several firsts to its credit, the more significant among which are being the fastest and top-of-the-range Levante, and having the highest hp output per litre ever and the most powerful V8 in the history of the Trident.

Maserati vehicles are sold by Alfardan Motors in Oman. The Levante Trofeo made its world premiere at the 2018 New York International Auto Show and soon became the marque’s best-selling car. This is, after all, a Trofeo – trophy in Italian. Trophy for being one of the fastest Maseratis, second only to the Quattroporte GTS.

Arguably the sleekest looking car in this segment, what makes it stand out is the fact that it’s not muscled up like the other sloped-roof SUV ‘coupes’. In side profile, its 22-inch wheels – the largest ever fitted in a Maserati – are unmissable and a ready distinguisher in dual tone gunmetal gray with silver finishing, steel discs and coloured brake calipers. Moving up, apparently this is the first Levante equipped with Full Matrix LED headlights, which are designed in straight slits.

Further up on the hood, there are two air vents leaving no room for any doubt what this car is built for or its capabilities. While the three vents on the side – signature trait of Maserati vehicles – are in place, a Trofeo logo has been mounted on the C-pillar to make doubly sure there is no mistaken identity.

Both rear and front doors are frameless – rather uncommon in an SUV – giving it another distinct feature. The rear windows have built-in sunshades for additional comfort.

It has several carbon fibre accents which are quite visible on the exterior, including front splitters and side skirts. There’s a moderate size spoiler rolling off the roof with slits in it to channel air under it adding a sporty touch to its side profile.

At the back end, there’s more carbon fibre in the rear diffuser and a chrome bar underlining the Maserati inscription. Exhausts with black mesh surrounds add to the uncluttered elegance in the rear.

Inside, there are endless swathes of lush leather contrasted against uncoated – 3D – carbon fibre presenting a very textural feel throughout the cabin. The contrasting materials accentuate the black and red theme of the dashboard.

Encased in red Pieno Fiore leather with perforations and accented stitching, the seats are firm yet comfortable – the kind a chiropractor would probably approve. There are perforated leather grips on the steering wheel at 3 and 9 o’clock too.

An analogue clock mounted near the central speaker unit takes pride of place on the dash. Analogue speedometer and tachometer project out of a TFT centre display that presents all the drive information. The centre console with touch screen Maserati sat nav sits between two vertical air vents below which are controls for a two-zone climate system.

Adding more tactile texture to the cabin, there is black Alcantara in the headliner extending to the panoramic sunroof.

Probably owing to the marque’s Fiat Chrysler Automobiles owners, the infotainment system and buttons feel like those in other FCA vehicles.

Fitted with adjustable latches, there’s 20.5 cubic feet of cargo space behind the rear seats. The button to close the tailgate is on the bottom left in the cargo haul rather than on the gate itself.

A Maserati Touch Control Plus infotainment system with 8.4-inch touchscreen and rotary knob sits in the centre console. Among others, it displays a 360° surround view camera system, very useful in such a luxury car so you won’t scrap anything. The infotainment system can also be controlled via a layered cake control – near the gear stick – the top knob of which adjusts volume and lower one to control settings.

The Levante Trofeo is equipped with a 17-speaker 1,280-watt Bowers & Wilkins premium surround sound audio system, but driving itself will be so engaging that it’s unlikely that you’ll ever need any other entertainment even on long drives.

How it feels to drive

Like any other petrol Maserati engine, the Levante Trofeo 2020’s 3.8-litre V8 was developed in cooperation with Ferrari and produces 590hp at 6,250rpm and 730Nm peak torque at 2,500 – 5,000rpm. The car’s performance is aided by an eight-speed automatic transmission that shifts quickly and smoothly with no perceptible surges or sags. The engine’s eagerness will encourage you to drive hard.

Its Q4 Intelligent All-Wheel-Drive is designed to deliver 100 per cent of the torque to the rear wheels in normal driving conditions. However, on loss of traction at the rear, the Q4 can alter the front/rear torque ratio from 0:100 to 50:50 in milliseconds.

Adding to the Levante Trofeo’s groundedness and agility are Limited- Slip Differential and torque-vectoring function.

While executing highspeed cornering on the twisty Yiti-Humriya road, the system distributes more torque to the outer wheels by applying a slight braking force to the inner wheels so it never feels out of control.

Its engine sound is unique for a V8. It’s a luxury car, so you can’t hear the engine inside due to insulation. Turbo mutes all of the exhaust notes in cars in this segment, which isn’t the case here. Stand outside and ask someone to rev the engine – it sounds like a highly tuned instrument even when fired in normal drive mode.

Its other drive modes are Speed, Corsa – ‘race’ in Italian – and ICE (Increased control and efficiency), which is comfort mode in any other car. Curiously, Speed and Corsa are activated by the same button on the central console cluster. Corsa mode, which significantly lowers the car, is activated by holding down the Sport/Corsa button a little longer. Suspension is soft affording a plush ride even over the worst potholes in Darsait despite those 22-inch wheels.

The suspension can also be independently controlled via a button located near the gear stick. While being a grand tourer in ride quality, it’s a great commuter vehicle and a Ferrari at heart. It’s car in an identity crisis. All the same, the Maserati Levante Trofeo 2020 is a performance SUV built for the sole purpose of enjoyment.