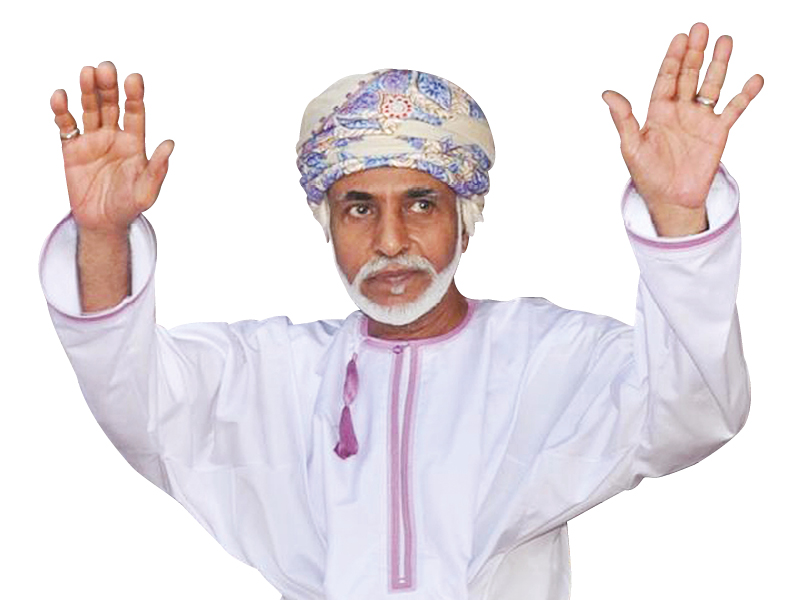 The Late His Majesty Sultan Qaboos bin Said, who passed away on January 10, 2020, may be gone but is never out of the minds of most people who on this date last year were deeply saddened by his loss. A father figure to the nation, his footsteps will forever show the way forward.

For many leaders in the region and across the globe, he was the statesman who they looked up to. He called on one and all to espouse peace, to honor and respect others, and above all love our country and culture.

There couldn’t be a better homage to the late leader than what His Majesty Sultan Haitham bin Tarik said in his first speech on January 11, 2020. “The will of the Almighty Allah on His beings is inevitable and to Him we shall all return. It was the Almighty Allah’s will that we have lost the best of men, the forgiven one, God willing, Sultan Qaboos bin Said; a man who cannot be served right by such a speech, as no words can calculate what he achieved and accomplished. He set up a modern state from scratch, a country that is now recognised by all, far and near. He established a deeply rooted renaissance whose features have crystalised in a set of laws and legislations that fortify this country and channel the progress of its march towards the blossoming future that he wished.

“Words fall short of articulating an eulogy for a Sultan as great as him (Qaboos bin Said), or describing his good deeds and accomplishments. Our only relief – the best with which we can eternalise his achievements – is to pursue his rightful legacy and derive impetus for the brilliant steps that he treaded in full confidence and determination, to preserve the gains that he made and to build upon them.”

In his second Royal speech, delivered on February 23, 2020, His Majesty Sultan Haitham, further said, “The past five decades have witnessed a great transformation in building a modern state, establishing advanced infrastructure, all over the country, under the leadership of the architect of modern Oman, the Late His Majesty Sultan Qaboos bin Said, and with the efforts of the loyal people of Oman. We would like to voice our appreciation for their endeavours to promote Oman’s prosperity and stature. We will proceed along the path of development and we will continue the blessed renaissance march as the late Sultan wished it to be. Conscious of the immense responsibility, we reaffirm that Oman will always remain our supreme goal, in all actions and pursuits.”

As for the citizens and residents of Oman, they are yet to come to terms with his demise even after one year. “His Majesty Sultan Qaboos bin Said’s death was so tragic. The whole universe, not just Oman, became sad. Sultan Qaboos’ legacy of love, peace and dignity for all, women and men, continues thanks to His Majesty Sultan Haitham bin Tarik, who shares with us our love and reverence of Sultan Qaboos, may he forever rest in peace,” said Dr Najma al Zidjaly, associate professor of Social Media and Arab Omani Identity at Sultan Qaboos University.

Oman has not only grown as a safe haven for citizens but also for expatriates, who say it is heaven on earth. “Along with the Omani nation and the rest of the world, my family and I were stunned to learn of the passing of His Majesty Sultan Qaboos bin Said last year. His incredible accomplishments in terms of infrastructure building, human development and diplomatic adroitness in this often volatile region are well known,” said Richard Lewis Baltimore III, former United States Ambassador to Oman, who has been residing in Muscat for the last 18 years.

“Beyond my four years as an ambassador, and in settings divorced from official responsibilities, I was privileged to get to know and admire him as a man and a friend. His smile, twinkling eyes, gentle laughter, wisdom and wise counsel will be missed, but never forgotten,” the former ambassador added.

To many, the Late Sultan Qaboos will forever be the moderniser of Oman. “In November 1972, my late father, brother and two sisters came to Oman on the call of the Late Sultan Qaboos – Allah rahmah – for the renaissance and rebuild our homeland. When we arrived in Muscat, we could not afford air conditioning and slept on the terrace at night. But soon after, we got our first jobs, and we were able to build our own houses and eventually, each one of the family moved into their own villas as time progressed,” said Omani author Majid al Suleimany, 72, who has seen Oman’s development over the years.

“All this was possible because of the Late Sultan Qaboos who was a person who sacrificed much for his country. Even when he was in pain and very sick, he put his country first. When it was announced that he had died, a part of me too died… and for a long time my tears flowed uncontrollably,” Suleimany added.

Over the past years, the Late Sultan Qaboos brought about a radical transformation in the life of each individual in Oman. “The hardships, lack of proper basic needs and proper transportation and communication are things of the past because of him. He will live in our hearts and prayers forever. He will be remembered for his wisdom and vision of peace. He will forever be an icon and a symbol of peace,” said Muna Basheer al Zadjali, who has not spent a single day without praying for him.

In his first speech on July 23, 1970, the Late Sultan Qaboos said, “I promise you to proceed forthwith in the process of creating a modern government. My first act will be the immediate abolition of unnecessary restrictions on your lives and activities. My people, I will proceed as quickly as possible to transform your life into a prosperous one with a bright future. Yesterday it was complete darkness, and with the help of God, tomorrow will be a new dawn on Muscat, Oman and it its people.”

Those who have been in Oman for long time, vouch for the fact that lifestyle in Oman has evolved into a modern, forward-looking society. “Diplomatically, he was able to resolve tribalism and bring peace and stability in the country. He accomplished international boarders with all neighbouring countries peacefully and diplomatically. Ladies and men have equal rights in many ways and work hand-to-hand for the development of the country. Also, his ‘Meet the People Tours’ were something that really astonished many leaders. It brought the people closer to him and his cabinet ministers who were also encouraged to meet the people and discuss their problems and requirements,” said Mohamed Nasser Ammar al Harthi, 66.

Over the last 50 years under the Late Sultan Qaboos, Oman sprinted to the limits of human achievement in every sector, both locally and internationally.

In his speech at the 41st Gulf Cooperation Council Summit at Alula city in Saudi Arabia last week, Mohammed bin Salman bin Abdulaziz al Saud, Crown Prince and Deputy Prime Minister and Minister of Defence of Saudi Arabia, said the Late Sultan Qaboos was one among two great leaders that the world had lost in 2020 who played a remarkable role in supporting the Gulf Cooperation Council’s march. The other being Sheikh Sabah al Ahmed al Jaber al Sabah of Kuwait.

He said that the Custodian of the Two Holy Mosques King Salman bin Abdulaziz al Saud of the Kingdom of Saudi Arabia issued directives on naming the summit as the ‘Sultan Qaboos and Sheikh Sabah Summit’.

‘The life of the Late Sultan of Oman was filled with great works and achievements, and his journey was full of sincere contributions and tireless work towards the progress and prosperity of the Sultanate of Oman and its people. The council offers its sincere condolences and sympathy to the Sultanate of Oman, its leadership, government and people, and to the Arab and Islamic nation as a whole for this great loss. The council showcased the role of the Late Sultan in promoting the journey of the GCC, along with his fellow leaders of the GCC states, and his great efforts in serving the Arab and Islamic causes, and promoting regional and world peace,’ said the closing statement of the 41st GCC summit.