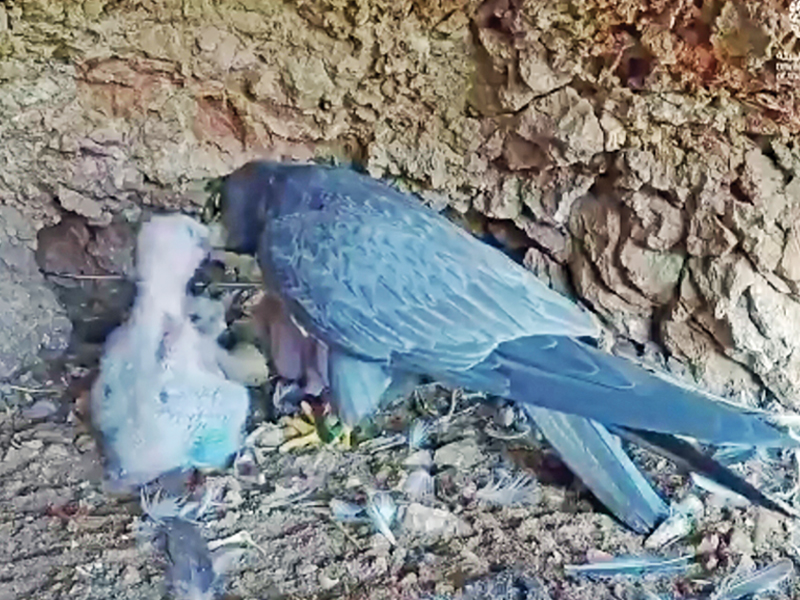 To document wildlife and spread awareness on its importance among members of society, the Office for Conservation of the Environment (OCE) at the Diwan of Royal Court has launched a short video on its social media account showing a sooty falcon feeding its chicks.

OCE ringed more than 450 sooty falcons as part of a scientific study it conducted over seven years. This female is one of those ringed.

Oman is considered one of the most important breeding grounds for these birds listed as ‘near threatened’ by the International Union for Conservation of Nature. Sooty falcons feed on small birds and insects.

In response to the video one citizen, Abdullah al Rashdi, said, “It seems that the falcon has already had a ring on its feet, perhaps for follow-up! Very nice video. Thank you.”

Elias Kharusi, another citizen, said, “The video reflects the beauty of Oman’s nature and its conservation of rare species of birds and falcons. Thanks for the documentation and the office’s work.”

Another citizen said, “We hope that the Office will release documentary films on wild animals and animals that are vulnerable to extinction so that the world knows about the importance of preserving these endangered animals. We also hope that Oman TV will play a role in this.”

Another respondent said, “Thank you from the heart; great efforts in preserving natural life and documenting it – much appreciated.”

Ruqaya al Alawiya said, “It’s amazing. This documentation conveys to us what we cannot see or experience on our own.”

The video can be seen at