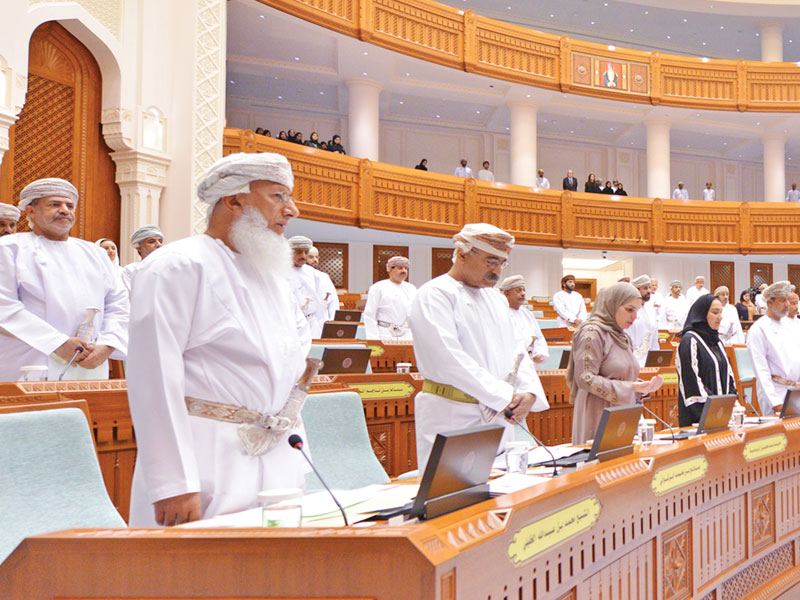 Dr Yahya bin Mahfoudh al Manthri, Chairman of State Council said that the session was devoted to the memory of Late His Majesty Sultan Qaboos. “I am honoured to present this eulogy, which expresses our overwhelming feelings and sadness, which we are bearing with patience.

“On the morning of the first day of the loss, the Omanis, led by Royal family members, were able to agree on the candidate referred by the Late Sultan. His Majesty Sultan Haitham bin Tarik received the recognition of Late His Majesty Sultan Qaboos in front of others.

“Omanis have proved to be genuine and generous people and Oman is a great nation having rich heritage, history, culture, values and principles that have shaped its personality since ancient times.”

Manthri said that the supreme speech of His Majesty Sultan Haitham bin Tarik delivered before the Council of Oman were words of memory dedicated to the Late Sultan, and the finest expression of loyalty to him, describing him as the dearest and purest man, and that a speech cannot define him and enumerate what he accomplished and built.

Manthri affirmed that the best tribute to the Late Sultan, is to follow his path, and to consolidate his steps, which he steadfastly and determinedly made for a progressive future and preserve what he accomplished and built upon.

He also spoke of the huge number of mourners who flocked to the sultanate from different countries, bringing with them the memories of the Late Sultan, admiring his noble stances and original policy in various affairs concerning world issues; thereby giving Oman an identity of a country that represents security, stability, and understanding and dialogue to solve all problems peacefully.

He went on to say, “Sultan Qaboos, by virtue of his religious, civil and military upbringing, whether inside the palace in the sultanate or during his study and training abroad, was allowed to combine traditions with modern science, ancient customs and traditions of his noble family and of the Omani society in general.

“This contributed to the formation of his unique leadership personality and noble qualities and values that he is distinguished by, and known to everyone who lived with him, or was in touch with him among his people and citizens, or his visitors and counterparts from different countries of the world.”

Manthri added, “The personality of the Late Sultan in itself is an integrated educational school: We learnt many lessons of life, love for the homeland and people, self-denial, justice, dream and optimism, tolerance, calmness, rational dialogue, knowledge of news of nations and their history, analysis of political events and their corridors, appreciation of science and scholars, respect for the principles of religion, values of society, its customs and traditions, attention to discipline and order, and celebration of arts among other things.

“His Majesty Sultan Qaboos, when he began to issue orders to the officials to implement something that matters to the country and the citizens, he examined it and discussed it with the specialists, and looked at its implications from various aspects and human dimensions first.

Manthri said, “It was the Late Sultan’s desire to extend the hand of friendship to all countries of the world without exception, and the accession of the sultanate to all international organisations: which accelerated the country’s involvement in the international system, which earned it respect and appreciation.”

The issuance of the Basic Law of the State in 1996, clarified the nature of the state, the principles directed to its policy, the system of government, the rights and public duties, the functions of the Head of State, the Council of Ministers, the Council of Oman and the specialised councils.

At the end of his speech, Manthri prayed to Allah to bless Late Sultan with his mercy and forgiveness. He also prayed to the Almighty to grant His Majesty Sultan Haitham bin Tarik, with good health and wellness, and Oman security, stability, goodness and prosperity under his rule.