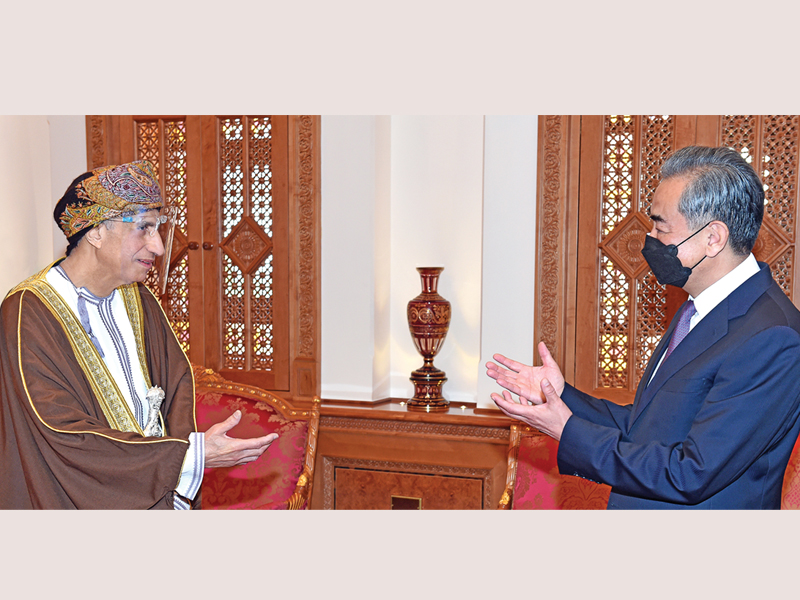 Wang conveyed greetings of his country’s leadership and best wishes of success to His Majesty Sultan Haitham bin Tarik and the government, and further progress and growth to the Omani people.

The two sides reviewed the growth and progress of their relations and ways to enhance bilateral cooperation in all fields. They also discussed current regional and international issues and developments.

Wang underscored the significance of his visit to Oman for the exchange of views on matters of mutual interest. He voiced his country’s appreciation for the efforts undertaken by the sultanate, both in consolidating domestic development and fostering ties of friendship with all countries.

Wang also expressed his country’s willingness to back efforts to enhance dialogue and understanding between countries of the world to help find fair solutions to crises and ensure peaceful coexistence among all peoples so that they can focus on development in a climate of security and stability.

He commended the exchange of views between Omani and Chinese officials, noting that this will reflect positively on Oman-China relations.

A session of political discussions was held at the Foreign Ministry on Monday.

The Omani side was headed by Sayyid Badr Hamad al Busaidi, Foreign Minister, while Wang led his country’s delegation.

The two sides reaffirmed their support to measures of advancing investments and tourism exchange within the context of the Chinese Belt and Road Initiative and with a view to realising mutual benefits for both countries.

The two sides welcomed the enforcement of a joint agreement for mutual waiver of entry visas for their respective citizens. They also welcomed a cooperation agreement in the field of science and technology.

Additionally, an executive programme for cooperation in media, health and cultural fields for the years 2020 to 2024 between the two countries was signed at a ceremony also held at the Foreign Ministry on Monday.

The programme was signed by Sheikh Khalifa Ali al Harthy, Undersecretary for Diplomatic Affairs in the Foreign Ministry, and Li Lingbing, Chinese Ambassador to Oman.

The session touched on bilateral cooperation in economic, scientific and cultural fields, as well as the exchange of views on various regional and international issues of common concern. They reiterated the significance of resolving conflicts by peaceful means and through dialogue among the disputing parties.

The two sides agreed to build a memorial of Chinese navigator Zheng He in Salalah. Wang and Sayyid Badr unveiled a model of the memorial monument commemorating the Chinese traveller’s visit to Oman 600 years ago.

Originally name Ma Sanbao, Zheng was an admiral and diplomat who helped extend the maritime and commercial influence of China throughout the regions bordering the Indian Ocean. He commanded seven naval expeditions almost a century before the Portuguese reached India by sailing around the southern tip of Africa.

The session of talks on Monday was attended by Deng Li, Assistant Foreign Minister of China, and other high-ranking officials of both countries.