Art for love of his country 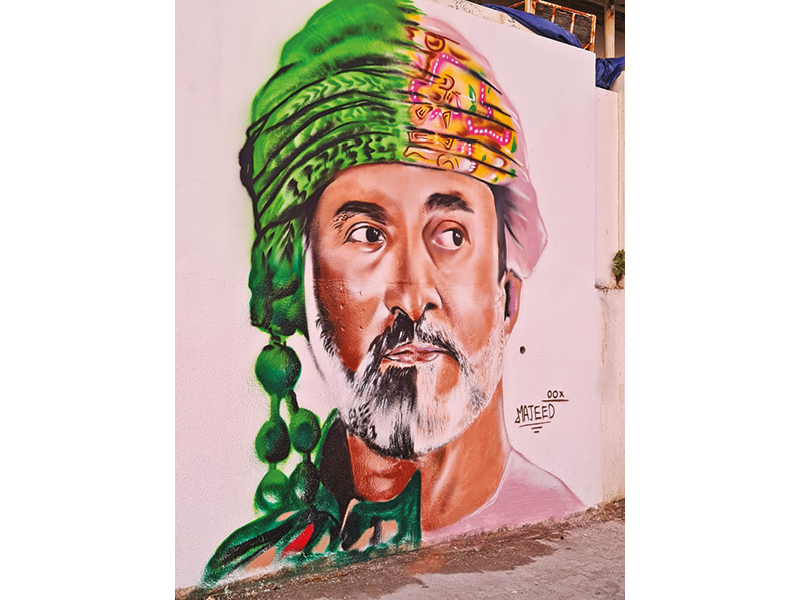 To promote Oman and express his love for His Majesty Sultan Haitham bin Tarik and the Late His Majesty Sultan Qaboos bin Said, an Omani graffiti artist has painted a half-half portrait of the two on a wall in Harmul, in the wilayat of Liwa, North Batinah.

In the past 13 years, Abdulmajeed Mohammed Salim al Mamari, 28, has found himself atop hills or standing in front of large canvases, including walls, making eye-catching paintings and portraits, adding to the aesthetics of the sultanate. His portraits express his love for his country, but he also creates world-famous personalities and depicts events that touch his conscience.

Speaking to Muscat Daily, Mamari, who has been making graffiti art since childhood, said, “I did the half-half portrait of His Majesty Sultan Haitham and the Late His Majesty Sultan Qaboos recently. It took me three hours to complete.”

“It was one of the more difficult tasks as some people were skeptical of my abilities. Some raw materials and colours are also not available, besides the absence of any financial support from anyone. But I am determined and patient; that’s how I am able to make the most of my potential. I will continue to promote my country in all its glory.”

Mamari has created portraits of King Salman bin Abdulaziz al Saud to express Oman’s love for the people of Saudi Arabia, Omani actress Fakhria Khamis to show support for her when she was infected with coronavirus during the ongoing pandemic, Sheikh Sabah al Ahmad al Jaber al Sabah after his death to offer condolences to the people of Kuwait, and the Late Sheikh Sultan bin Zayed al Nahyan of UAE.

“My graffiti art reflects current events or famous people who have influenced the world. I have also painted footballer Lionel Messi and the American George Floyd, who died in a case of police brutality in Minneapolis, US, in May. I inscribed the George Floyd graffiti with the now famous phrase ‘I can’t breathe’. I believe graffiti art must have a purpose,” Mamari said.

He intends to continue making graffiti on walls, valleys, mountains and other locations in the country to promote tourism in Oman.

“I hope that my art reaches a wider audience and helps promote my country. And I wish there were designated walls for graffiti artists to work on to express their love for their country.”