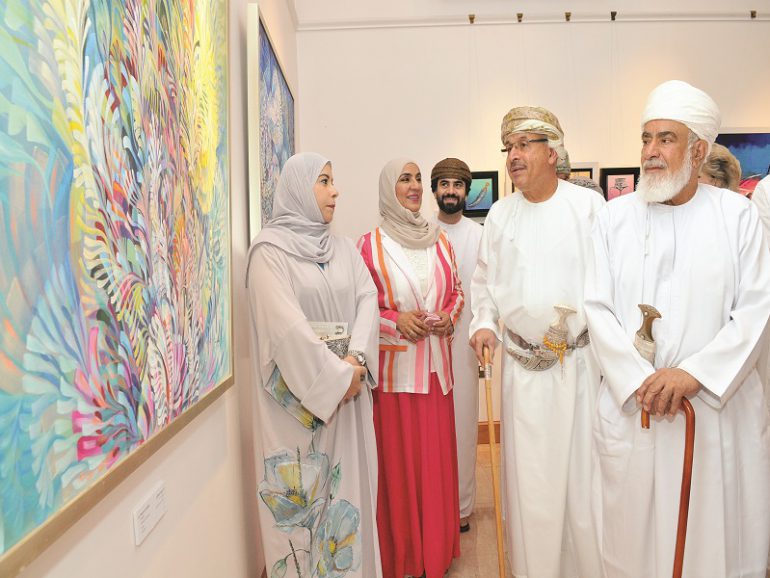 An exhibition opened at Bait al Zubair last week to help an artist breathe life back into a 300 year old settlement currently in ruins. Aimed at reviving the village of Imty in the wilayat of Izki, Governorate of Dakhiliyah, the exhibition titled Imty with colours of goodness is Maryam al Zadjali’s ongoing project that started in 2016 on a whim. Director of the Omani Society for Fine Arts, Maryam was intrigued by the village’s name on first coming across it on her way to Nizwa. She became curious to know what it looked like and created images in her mind to match a village with such a name.

The next time around she drove past the village, she met people from the area who recommended she pay a visit. She did eventually go to Imty with which started a project very close to her heart and is long-drawn-out.  What started out as an inspiration for one artist’s exhibition now involves several artists, private firms and ministries. Imty with colours of goodness, which is open till October 3, has artworks of close to 20 artists.  Fifty per cent of the sales proceeds from the exhibition will be used to rebuild the village.

Maryam’s ambitious project – called Immortalising the Archaeological Moments in Art – aims to restore Imty in its past glory and make it a tourist, artistic and cultural destination that showcases Oman.The events held under its umbrella so far have involved 100 school children, the Nizwa Bikers, creation of a special song on the occasion of qaranqasho, businesses that work in the environment sector and more.

Most of the artists exhibiting their work in the exhibition also participated in an event in the village. “There was a wall almost falling apart there. We got it plastered and arranged 19 Omani artists to go to Imty and paint the wall with patterns and design elements seen on the doors and windows of the village. They translated these elements to the wall,” Maryam said.

This followed a three-day event in which artists painted the trash bins in the village in an effort to beautify it and attract tourists. Next in line is an event involving the distinguished women of Imty to coincide with Omani Women’s Day, and another likely on November 20 around the time of  National Day. A part of the ‘My Village Identity’ event in which 100 children from four schools from Imty participated will also be presented early next year. “The children made it clear that they want to restore the village to how it was in the past, when their grandfathers and great grandfathers lived there. I will present the outcome of  the ‘My Village Identity’ event in a solo exhibition on Imty in the National Museum in January 2020,” Maryam said.

Among the artists participating in Imty with colours of goodness at Bait al Zubair is Raya al Manji who chose still life artworks for the exhibition. Pointing to her paintings, Raya said, “These are traditional and iconic elements unique to and symbolic of Oman, in much the same way Imty is unique.”

Naila al Mamari painted “prayers in abstract with bright circular beads mounted on trees rising high into the sky with praises for the Almighty”.  According to Naila, when she visited Imty to paint on its wall, it wasn’t the arches, the doors or windows of the villages that struck her. “I focused on the trees with symbolic prayer beads.”

Another artist who visited Imty for the art event to paint the wall was Fakhra Taj al Ismaili. She is presenting three striking mixed media works titled after the village in the exhibition, including one inspired by the night sky. “The image of Imty’s night sky will stay with me forever. There is an almost haunting element to it.”

Yousuf al Nahawi, who is assisting Maryam in her pet project, is presenting four mixed media artworks that depict the hospitality and adaptability of Oman and its culture with iconic monuments as backdrop. About Maryam and her Imty project, Nahawi said, “Artists have a responsibility towards society and the country. Maryam understands that well.”

Taking a cue from Nahawi, Maryam said this project is not just hers but everyone’s. “We must help our government; we can’t only depend on the government to rebuild heritage sites. We have to work for it with our heart. This is what we need to do for our country. This is a distinguished project – it has never happened before. The people of Imty deserve to be known.”