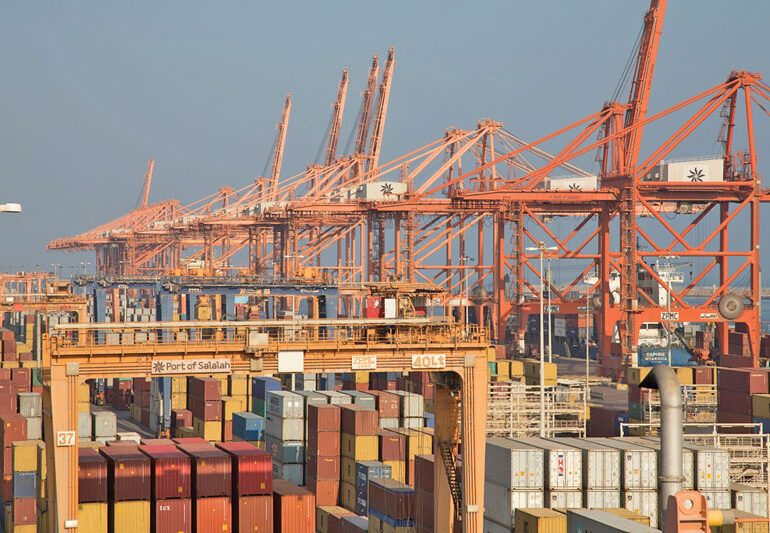 According to Asyad Group’s statement to Oman News Agency, Omani ports’ commercial operations and volumes of direct import recorded a 5 per cent increase over the first nine months of 2021.

‘The number of containers handled reached 3.9mn TEUs (twenty-foot equivalent units) in the first nine months of 2021, a 3 per cent rise compared to the same period in 2020. General cargo volume grew by 7 per cent to 41.2mn tonnes. Volume of liquid commodity handling also saw a steady increase of 8 per cent compared to 2020, reaching 15mn tonnes,’ the statement said.

Asyad noted that the sultanate’s ports have proved their resilience against a challenging economic backdrop as they continued to sustainably meet the country’s food and medical needs.

It said, ‘Port operations and efficiencies remained at an all-time high while new strategic partnerships were forged with a growing list of global shipping lines. Today, Sohar Port, Port of Salalah and Port of Duqm have become gateways into Oman and important destinations on global trade routes that connect the country to Asian, European and African markets.’

Oman’s medium size ports – Suwaiq, Shinas, Khasab and Port of Sultan Qaboos – have also played a crucial role in providing local produce with access to markets in the region, the statement added.

Asyad Group currently owns a growing fleet of more than 60 state-of-the-art vessels with a total capacity of 9mn tonnes, offering dynamic shipping solutions to its customers.

As result of its strategic vision, Asyad’s container shipping line saw a 19 per cent growth in commercial activities over the first nine months of 2021, shipping 261,686 containers, and connecting Oman to markets in the GCC, Indian sub-continent and East Asia.

Aiming to better serve the local and regional markets, Asyad also purchased 9,600 new containers of which 100 are refrigerated, a sound decision which successfully allowed for the import of food and medical products directly from producing countries.

Today, the Oman Container Line is amongst the Alphaliner’s top 100 largest container and liner operators in the world based on capacity.

Asyad Group has been paving the way for Oman’s logistics drive since 2016. By implementing best practices and adopting the latest technologies and solutions, the group has been able to transform the sultanate’s logistics sector and increase its contribution to the national GDP to 4 per cent in 2020.

Asyad Group – the sultanate’s global integrated logistics service provider – was ranked as the fourth biggest logistics company in the Middle East and North Africa by Forbes Middle East magazine for the year 2021.

The group operates three deep ports, two free zones and an economic zone in addition to providing full maritime services with one of the largest drydocks in the Middle East. It owns a diversified fleet of 60 vessels, supported by a sea transport network that connects Oman to 86 commercial ports in 40 countries worldwide through an average of 200 direct lines weekly.

Building a strong reputation in the market, Asyad Drydock serves customers from 35 countries around the world. The group’s services recorded a remarkable year with a 35 per cent increase in ship repair during the first nine months of 2021. Total projects procured were 143 in comparison to 106 for the same period in 2020. With its eye on the future, Asyad has been continuously building on its Drydock capacities and capabilities.

Today it provides ship building solutions in addition to maintenance and general vessel repair services, further positioning the group and Oman as a one-stop-integrated-logistics-shop.