Team France continues good form after day one in Sur 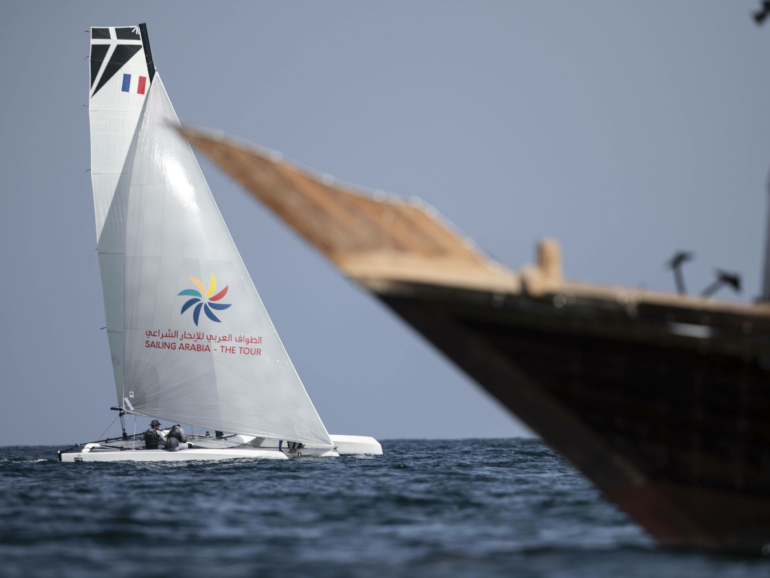 Muscat – The first day of leg two of this year’s Sailing Arabia – The Tour ended with Team France still in the lead as the gap to DB Schenker in second grew to a single point. Oman Sail remain in third with Oman Investment Authority in fourth, Barceló Mussanah Resort fifth and Nastro Rosa of Italy in sixth.

Racing featured a longer coastal raid along the shoreline, which Team France won ahead of DB Schenker and Nastro Rosa, and then two short stadium races. Team France and Oman Sail traded wins, each claiming victory in one and relegating the other team to second place. As well as a one-point gap at the top, Oman Sail has opened up a three point advantage over fourth place as the fleet began to separate.

Ali al Balushi, bowman on the Barceló Mussanah Resort team, said, “Today was a great day of sailing, very challenging with some ups and downs for our team but we came back in the coastal raid, finishing fourth. Afterwards we had two inshore races, finishing fourth and sixth, last, which was a bit frustrating. There are still two more stages, and we will try to improve as a team, make good decisions and we’re confident the results will come in the end.”

Solune Robert, helmsman from Team France, said, “Today we had three races, and all three went very well for our team. There was a tight battle and some contact with the other boats which was a very nice feeling, a reminder that the competition is fierce. There are some very strong teams this year. We finished first and second in the in-port races and are very happy with our performance. Sur is a very beautiful place to sail, the winds move a lot in direction and strength here, which is a challenge but we are very happy to be here to race.”
Sailing Arabia – The Tour 2021 is run in full adherence to the government of Oman’s latest COVID-19 safety protocols.