4 tonnes of debris removed in Masirah 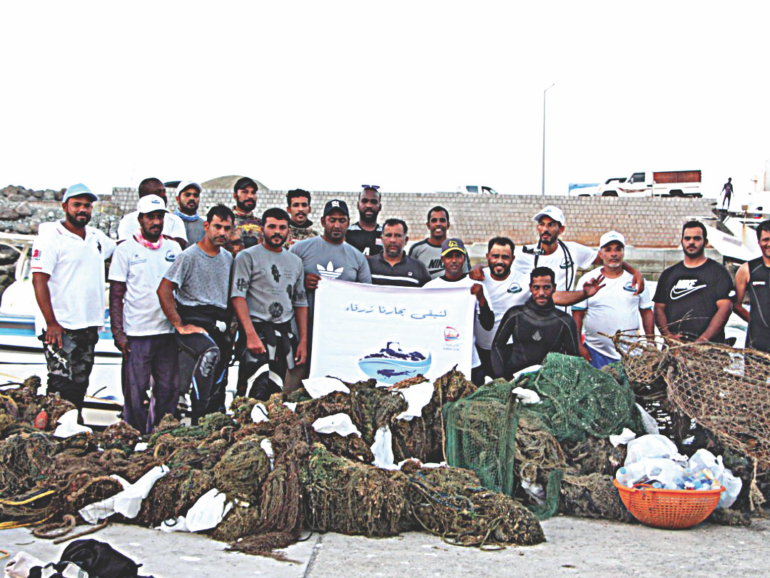 Muscat – Fifty-one divers and 127 volunteers recently came together to remove about four tonnes of marine debris from around Masirah Island.

The Environment Authority, in cooperation with the Oman Fisheries Co and Quriyat Divers team, ran the clean-up campaign from November 4 to 8 with the participation of volunteers.

“The dive started at 8am and ended at 1pm. Volunteers and divers from several wilayats came together for this task to clean the marine environment and protect coral reefs around the island. Divers spotted dead fish in those nets, which is a waste of marine wealth in the sultanate. The waste of marine resources also affects the livelihood of fishermen,” he said.

According to Amri, the clean-up in Masirah Island aimed at spreading awareness on the importance of preserving the marine environment, and encouraging volunteer work among people in the wilayat.

“Prior to physically removing the waste, some members of the team did a reconnaissance dive at the site and wrote a report. Later, the report was discussed at a meeting and work delegated to each member,” Amri said.

Quriyat Divers was established in January 2019 and since then has conducted several clean-up dives across Oman.

The biggest challenge for divers when carrying out clean-up efforts is the same which entangles and kills marine creatures – fishing nets. Getting entangled in nets in the depths of the sea is a diver’s worst nightmare.

“Occasionally, we also encounter poisonous fish, aggressive sharks and get stuck in coral reefs. But we are determined to continue our clean-up campaigns.”

The team is enthused to continue the important work of cleaning Oman’s seas. “We hope fishermen abide by fishing laws issued by the competent authorities and use modern methods of fishing and technology to preserve marine wealth. They shouldn’t discard unwanted nets in the sea. We thank everyone who participated in supporting our campaigns.”