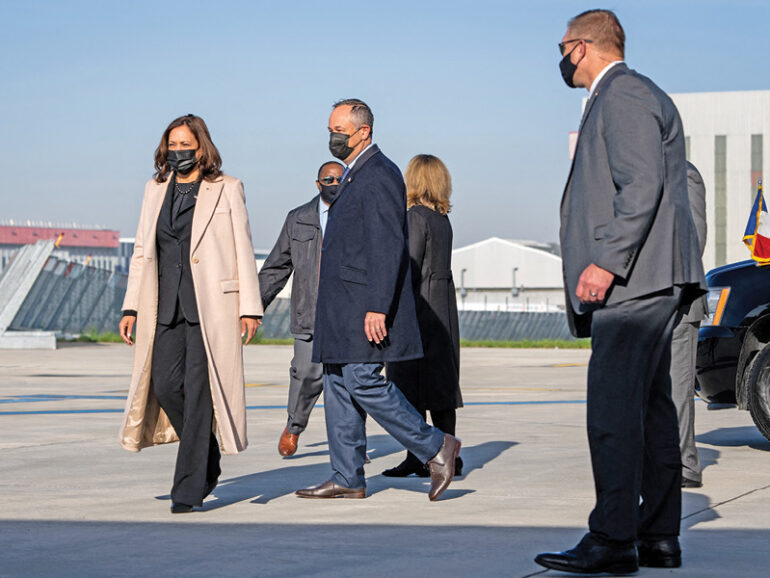 Paris – US Vice President Kamala Harris touched down in Paris on Tuesday on a mission to further mend relations with France after a crisis brought on by a cancelled submarines contract.

During her four-day visit – her third overseas trip in office – Harris will meet with French President Emmanuel Macron, attend a peace forum with other world leaders, participate in a multilateral conference on Libya and take part in commemorations for the anniversary of the end of World War I.

Her trip comes after a huge French-American row that erupted in September when Australia walked out of a multibillion-dollar submarines deal with Paris in favour of an alternative one with the US.

President Joe Biden sought to make amends at a meeting with Macron last month, telling the French leader that his government had been ‘clumsy’ in the way it secured the submarines deal with Australia which is part of a new strategic alliance between the US, Australia and Britain called AUKUS.

It was the clearest sign of contrition from the US since the start of the row that saw France recall its ambassadors from Washington and Canberra after the deal that swept aside an agreement worth more than US$60bn struck by a French defence contractor to sell diesel-powered submarines to Australia.

Harris, who is to meet with Macron on Wednesday, is expected to confirm Biden’s overtures, including with discussions about possible US support for France’s military mission against militants in the Sahel, and for plans to beef up European defence capabilities.

Another official said Harris’s speech at Thursday’s Paris Peace Forum, which focuses this year on COVID recovery, would address ‘big, converging global crises’. She will also attend a special session at the Forum dedicated to the regulatory framework for Internet companies, French officials added.

On Thursday’s World War I armistice day, Harris is to visit the Mont Valerien American cemetery on the capital’s outskirts, they said.

Before returning to Washington, Harris will take part on Friday in the Paris Conference on Libya, a diplomatic push to promote peaceful elections that could stem the numbers of migrants fleeing the conflict-hit country for Europe.

“We want to build a stable and prosperous Libya free from foreign interference and capable of combating terrorism within its borders,” the official said.

The Vice President has come under fire over her performance as the administration’s point person on America’s own migrant crisis at the US-Mexico border, which critics say has worsened since Biden came into office.