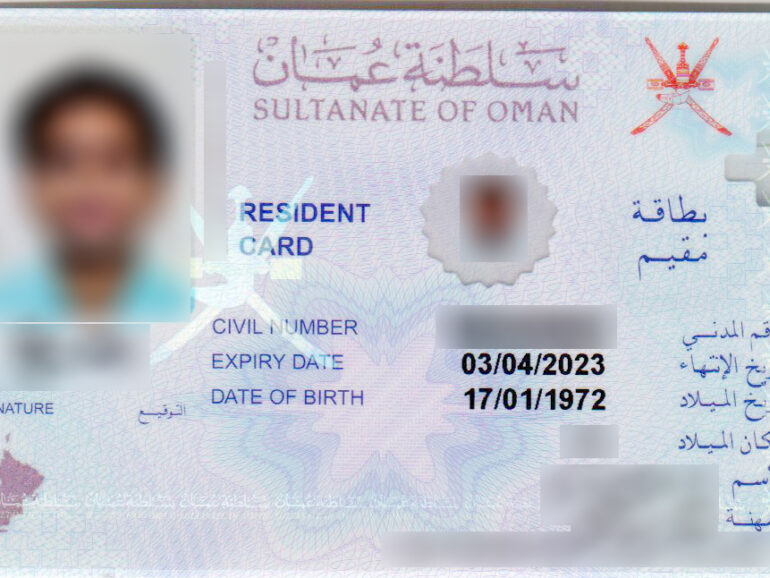 Muscat – Lt Gen Hassan bin Mohsen al Shraiqi, Inspector General of Police and Customs, has issued a decision to amend the executive regulations of the Civil Status Law allowing expat Resident Cards to be valid for a period of three years instead of the current two.

The decision also makes it mandatory for Civil ID Cards for citizens and Resident Cards for expatriates to be obtained within 30 days of the date of an individual attaining the age of ten.

‘The Civil ID is valid for five years, while the Resident Card will be valid for a period not exceeding three years from the date of issue or renewal,’ the decision stated.

Civil ID and Residency Cards will be issued within 30 days of citizens and residents attaining the age of ten, or within 30 days of entry into the sultanate in the case of expatriates aged older than ten years.

The fee for renewal as well as new Civil ID cards has been set at RO5. Replacement of damaged or lost Civil IDs will cost RO10.

According to the decision, the fee for new as well as renewal of Resident Cards is RO5 (for each year). Replacement of a damaged or lost Resident Card will cost RO20.

The penalty for not renewing Civil ID and Resident Cards is RO5 for each month of delay, while the fine for not obtaining a Civil ID card within 30 days of an individual turning ten is RO10.

The decision was issued on October 21, 2021, and came into effect a day following its publication (October 25).

Lt Gen Shraiqi also issued a decision to amend some provisions of the executive regulations of the Foreigners Residence Law setting the fee for investor visas.