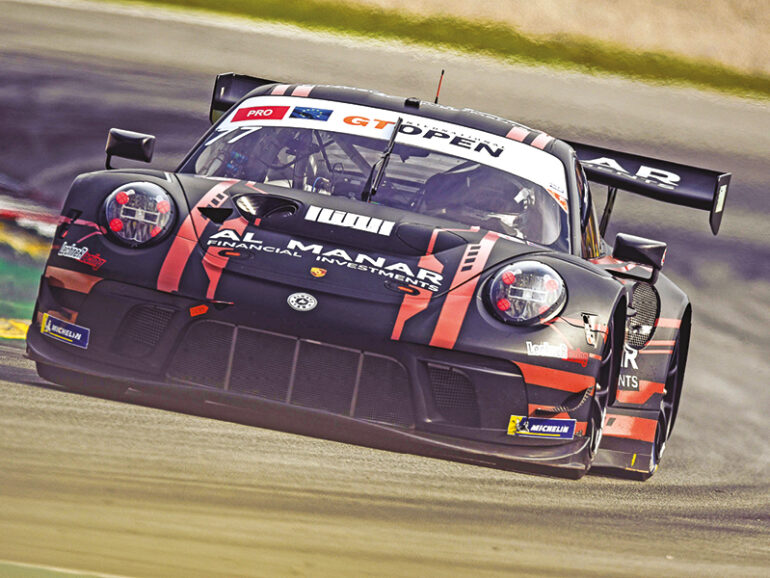 Muscat – An amazing fightback from Oman’s Al Faisal al Zubair and Spain’s Andy Soucek saw them recover from first-lap drama to finish fifth in the first of two races in the final round of the 2021 International GT Open Series at the Circuit de Barcelona-Catalunya in Barcelona on Saturday.

Soucek also sealed the championship runner-up spot with Al Faisal overall third with a race to go on Sunday.

Al Faisal was pushed off the track into the gravel on the opening lap of the race and fought back from 12th to hand the car over to Soucek from seventh place.

Soucek then managed to recover another two places to seal a hard-earned fifth.

Martin Kodric and Ethan Simioni claimed victory in the 70-minute race by 0.278 seconds from Jim Pla and Thomas Drouet. Belgium’s Baptiste Moulin and Japan’s Yuki Nemoto rounded off the podium places in the second of the VSR Lamborghinis.

Speaking after the race, Al Faisal, who is in his debut GT Open Series season, said, “For race one, I went out for qualifying and we qualified P7. Considering we did not go on the second set of tyres to save it for the race, I think it worked out in the end.

“Unfortunately, I was pushed out into the gravel in turn one and that dropped me down to 12th place. Then I managed to drive back to seventh before handing the car to Andy.”

He added, “Andy brought it back in P5, which was a great result considering all the action that happened during the race – pushed out in the gravel in turn one on lap one and getting pushed out midway through my stint. That set a few obstacles for us to pass. Overall it was a good way to end. We will give it our all in the last race on Sunday.”

Al Faisal qualified the Porsche for the first of the weekend’s races in chilly but dry track conditions. The Omani was in the top-three through the early minutes and then finished the session in seventh place with a best lap of 1min 44.633sec.

Frenchman Jim Pla dominated the session in the AKKA ASP Mercedes AMG GT3 and qualified on pole position with a fastest lap of 1min 43.152sec. Schandorff left it relatively late in the session to snatch second place with a 1min 43.448sec and Martin Kodric was third.

Earlier, the Lechner Racing duo raced for 20 laps during the first practice with a best tour of 1min 45.371sec put them in sixth and just 0.124 seconds behind title rivals, Beretta and Schandorff.

The pair enjoyed a better second practice session and a best lap of 1min 45.221sec placed them third in the results behind the session-winning Beretta and Schandorff and second-placed Loris Spinelli and Florian Scholze in their AKM Motorsport Mercedes.