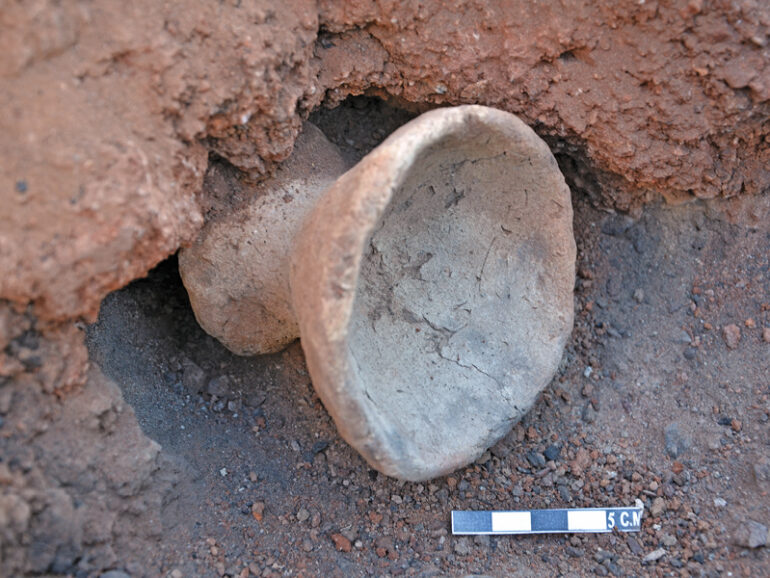 Muscat – Incense burners have been used in Oman for more than 4,500 years. This was proved following the discovery of an incense burner dating back to 2300-2200 BC.

A group of archaeologists found the antique in the village of Dahwa, 24km west of Saham, North Batinah, making it the oldest known incense burner to be found in Oman.

The discovery was made by the Archaeology Department of the College of Arts and Social Sciences at Sultan Qaboos University (SQU) working in association with the Ministry of Heritage and Tourism.

The artefact was unearthed from an eight-year-old excavation site in Dahwa where forts, aflaj, cemeteries, mines and human settlements dating back thousands of years spanning different periods, from Stone Age to the late Islamic Era, have been found.

The archaeology team is studying the area of Wadi As’Sakhn to explore human activity during the early Bronze Age, notably the culture of Um An-Nar Era dated 2700-2000 BC (an intermediary between Mesopotamia and Indus Valley cultures).

The team started excavation work in 2014 under the supervision of Prof Nassir al Jahwari, Dr Khalid Daglas and other SQU researchers.

The site comprised a large number of enclaves that housed ancient human settlements along the banks of a valley. The enclaves include building structures, the most notable of which is a monument marked by researchers as DH1:S.10, where the team found seven multipurpose chambers, including rooms for storage of imported goods, a copper smelter and a residence.

According to a press statement, Carbon-14 dating showed that the incense burner is the most ancient antique of its kind discovered so far.

The analysis was done at the laboratory of Georgia University, United States. The specimen was cross-checked at Max Blank Institute, Germany, where traces of plant oils were found in the burner.

In 1996, a similar incense burner was unearthed in Ras al Jinz, dating back to 2200 BC. This burner, made of white limestone, too had traces of incense. It was the most ancient evidence that Omanis used frankincense for centuries in everyday activities.