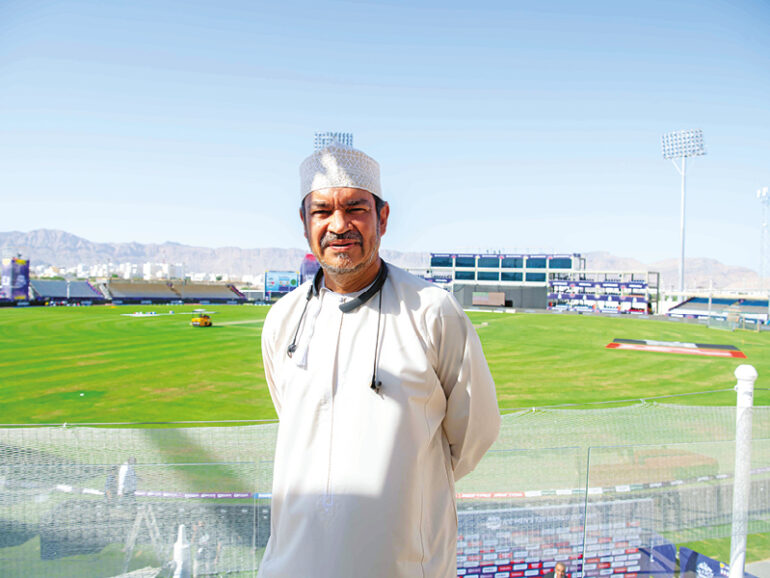 Muscat – The moment of history is here as Oman Cricket gets ready to soar into a new orbit where it will proudly claim hosting and launching the ICC Men’s T20 World Cup 2021.

At 2pm on Sunday when the match umpires say ‘Play’ to set the ball rolling for the T20 World Cup, history will be made as Oman becomes the first Associate member country to host the global showpiece event.

It will be a double celebration for the hosts as they also take part in the World Cup in a second successive edition.

Oman take on debutants Papua New Guinea (PNG) to kick off the seventh edition of the T20 World Cup on the first day, while the other two teams in Group B of the First Round – Bangladesh and Scotland – meet in the second match this evening, starting at 6pm.

Ahead of the historic day for Oman Cricket, its chairman Pankaj Khimji was at a loss of words and termed it an ’emotionally charged moment’.
Pankaj, who led the remarkable team of officials in realising a dream of every Oman cricket fan, broke down while thanking all who had made it possible.

“Oman Cricket Academy Ground at Al Amerat is hosting a World Cup. All the memories of how we built this venue, brick by brick, are coming back like a wave,” he said.

Pankaj added, “We are delighted and proud to have Sayyid Theyazin bin Haitham grace the opening ceremony of the T20 World Cup.

“What we have achieved in this short time to fulfil the ICC conditions to host the World Cup is only because of Sayyid Theyazin’s support and the blessings of our patron-in-chief His Majesty Sultan Haitham bin Tarik.”

Pankaj’s father, the Late Kanak Khimji, was the founding member of Oman Cricket. His role was key to where the game has reached today. Over the past many decades, cricket in Oman has grown by leaps and bounds and on Saturday, Pankaj was confident in saying that ‘we are going to Dubai’.

Dubai, Abu Dhabi and Sharjah are the other venues of the T20 World Cup that will host matches from the Super 12s stage to the finals.
The top-two teams in Group B here will advance to Super 12 and Pankaj said that Oman’s players under coach Duleep Mendis have the potential to advance as the best two from Group B.

“That will be the cherry on our cake and I am quite confident that our boys can achieve it,” he said.

Venue all done up

The Oman Cricket Academy Ground is all done up like a bride with a sea change visible at the venue achieved in the past 90 days or so.

Seating capacity has been raised to accommodate 4,500 fans, while the floodlights installed are said to be one of the brightest in any cricket stadium in the world. A brand new press box and media centre, besides 24 corporate hospitality boxes, have been set up.

OC has managed to convince ICC for a short opening ceremony that will also mark the Omani Women’s Day.

Muscat Daily had first reported that the all-women Royal Cavalry mounted band will perform, though without horses, on the ground. However, around 21 caparisoned horses of the Royal Cavalry will line up at the boundary with 16 riders holding the participating teams’ flags. The ICC T20 World Cup trophy is expected to be brought to the ground on horseback.

Pankaj hoped that #Oman trends across the world and the T20 World Cup is just the beginning of many more bigger and world-class games to be held at the venue.