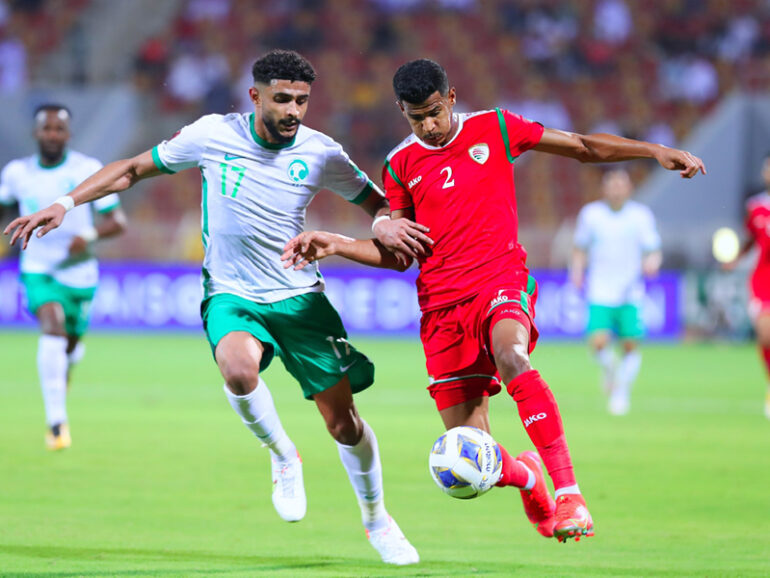 Nearly 10,000 fans attend the match at the SQSC for the first time since November 2019

Regional rivalry often brings out the best. Hosts Oman and Saudi Arabia have played a lot over the decades but in recent times, the difference between the two teams hasn’t been much unlike the late eighties and nineties when the Saudis dominated.

On Tuesday, Oman went into their second match of the AFC Asian Qualifiers – Road to Qatar Group B match against the Green Falcons on the back of their historic upset win over Asia No 1 side Japan last week.

The high-flying Red Warriors’ dream of a second successive win at the Sultan Qaboos Sports Complex (SQSC) in front of their home fans was dashed by Saudi Arabia as the visitors eked out a 1-0 win to make it two out of two wins in the Asian Qualifiers.

The all-important goal for Saudi Arabia came late in the first-half as Saleh al Shehri unleashed a powerful shot from inside the box past the Oman custodian and captain Faiz al Rusheidi in the 42nd minute of the match.

The hosts, coached by the astute manager Branko Ivankovic, could have easily shared the honours of the night but for the gilt-edged chances squandered by the Omani players.

And the most noticeable miss that is certain to haunt Oman’s experienced striker Abdulaziz al Miqbali, was in the injury time of the match.

The win helped Saudi Arabia complete a perfect week as they registered their second victory in five days following their 3-1 win over Vietnam.

Shehri’s strike was the decisive moment of a cagey and hard-fought affair, taking them level with group leaders Australia on the maximum six points after two matches.

Oman did display glimpses of quality but failed to reach the heights of last Thursday’s shock win away to Japan until a frantic but fruitless finale, and remain third on the Group B table with three points.

Playing at home for the first time since November 2019, the Red Warriors showed plenty of promise and earned a succession of early corner kicks, the majority of which were comfortably

dealt with by the Saudi Arabia defence.

The visitors, coached by Frenchman Herve Renard, had the lion’s share of possession but few early chances, with a long-range effort from Salem al Dawsari providing them a rare sight at goal in the 26th minute, but their quality showed when Shehri put them ahead three minutes before half-time.

The breakthrough was nothing short of spectacular, with Salman al Faraj’s lofted pass smartly backheeled by Fahad al Muwallad into Shehri’s path, with the Al Hilal man rifling the ball low into Rusheidi’s net to cap off the best move of the first half.

Staring at a half-time deficit, Oman emerged from the interval and promptly created their best chance of the match so far, with Saudi Arabia goalkeeper Owais forced into a save to deny a

For their part, Saudi Arabia appeared content to slow the game down and hold onto their lead, but they went within a metre of adding to it when Shehri sent a towering header narrowly wide with less than 20 minutes remaining.

With a nearly 10,000-strong crowd urging them on, the hosts continued their search for an equaliser, which they very nearly found in the dying minutes.

Owais twice saved efforts from Salah al Yahyaei, the second of which spilled into the path of Miqbali, only for the substitute striker to miss the open goal on offer from a matter of only a few yards.

That spurned opportunity means Saudi Arabia will go into next month’s home fixtures against Japan and China with their perfect record intact, while Oman will face Australia in Sydney before returning home to meet Vietnam.