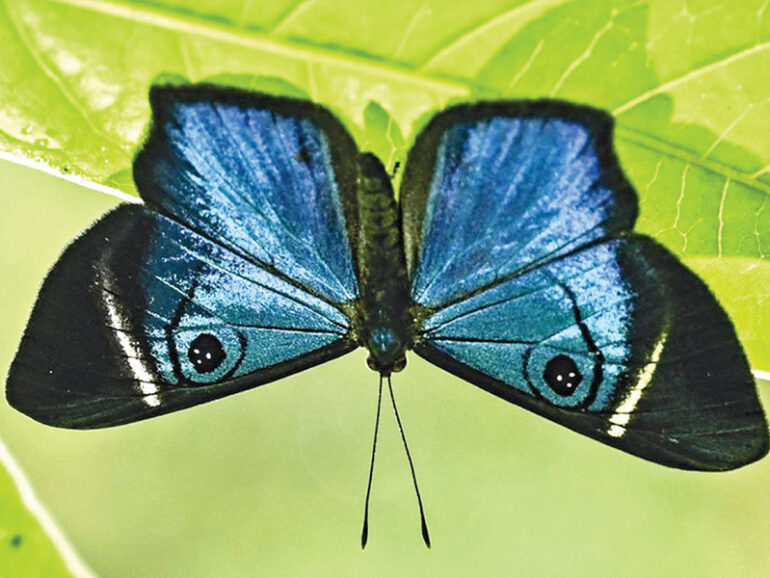 Like the more than 3,000 species of butterflies in Colombia, agronomist Juan Guillermo Jaramillo underwent his own metamorphosis several years ago, as his passion for photographing nature took an unexpected twist.

The 65-year-old, who used to run an animal feed business, originally took photographs of birds, but he is now a key figure in the world of Colombian butterflies.

Jaramillo is the co-author of an inventory that led to Colombia being recognised as having the widest variety of butterfly species in the world.

The list he worked on was published in the British Natural History Museum in London – which has the world’s largest collection of butterflies – in June.

The Checklist of Colombian Butterflies identifies 3,642 different species in the Andean country, which makes up 19.4 percent of the known global varieties. But Jaramillo is keen to point out he is not a collector.

“I broke from the traditional image associated with butterflies of collectors that kill them, put them in an envelop and then pin them to the inside of a box,” Jaramillo told AFP. “I’m simply not capable of killing them.”

Like bees, butterflies are pollinators vital to the ecosystem. They are also an important source of food for birds and snakes.Yet their habitats are under threat from deforestation, agriculture and global warming.

Jaramillo, who lives in the southwestern Antioquia department, has an archive of 220,000 photos of butterflies and has captured images of 1,500 different species.

Jaramillo has spent the last 15 years trekking through jungles and woodlands in search of the ‘winged jewels’ – a dangerous pastime given those areas are infested with armed groups and drug traffickers.

The signing of an historic 2016 peace accord between the government and the marxist guerrilla Revolutionary Armed Forces of Colombia after more than half a century of armed conflict sparked hope areas previously off limits would become safe for scientists and naturalists. But it was not long before armed rebels and drug-traffickers returned.

“I want to go to many places but there are some I don’t go to out of fear,” said Jaramillo. When he does venture out, Jaramillo takes with him a camera, tripod and a container of pink liquid he prepares every morning – shrimp bait.

Having tried various other types of bait, he found shrimp worked best. He spreads the foul-smelling bait on rocks and leaves by a rushing stream, and even lays out cotton balls soaked in the liquid.

“That’s how I make them think it’s bird droppings. When the butterflies land on a leaf they stay there for quite some time… they’re almost like models,” he expalined. “Without the bait, it would be impossible to see certain species in the woodland because they live in very tall trees.”

Another potential barrier is the weather. “If there’s no sun, there are no butterflies.”

Jaramillo used to be a bird watcher and also compiled an inventory of the species he observed. Colombia boasts the widest varieties of bird species and orchids, according to the United Nations’s Convention on Biological Diversity. It was the switch from film to digital photography that sparked Jaramillo’s conversion to butterflies.

“Taking a good photo of birds is very difficult because you need very big, heavy lens,” he said.

While filming birds, he also took photos of butterflies and was amazed by their colours and shapes. It opened up a vast world to Jaramillo. After beetles, butterflies and moths are the most numerous insect on the planet with almost 160,000 described species.

“In Colombia, I think there are about twice as many species of butterflies as birds,” American Kim Garwood, Jaramillo’s fellow inventory author, told AFP.

“In the Andes I have been told there are about 10-15 percent of the butterfly species that are undescribed. We have many photos of undescribed species.”

Near his farm on a road with little traffic, Jaramillo, who is retired, says he is in the perfect place to photograph butterflies when the sun rises and the day’s warm air helps them stay aloft.

But Jaramillo’s work doesn’t end with sunset, as at nightfall, he turns his lens onto moths.

“With butterflies and moths, I have work for this lifetime and 10 more,” he quips.