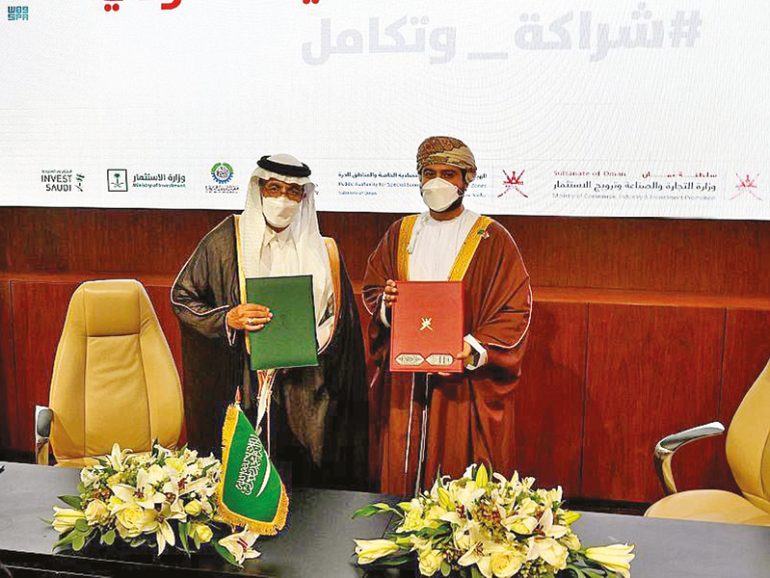 Oman and Saudi Arabia signed a memorandum of understanding (MoU) to promote and encourage joint investments during the launch of the Omani-Saudi Investment Forum on Monday.

The forum will introduce business opportunities in the two countries which would eventually boost investments in the sultanate and Saudi Arabia in various fields.

Another MoU was signed between Oman’s Fisheries Development Company and the National Aquaculture Group (NAQUA) of Saudi Arabia for the establishment of a shrimp farming project in Al Jazer in Al Wusta governorate.

H E Yousef said, “We see in this honourable visit a serious desire to give a further push to a growing partnership in the strategic economic sectors of interest to the two countries. We are fully prepared to advance this partnership and achieve areas of integration.”

Eng Falih stressed that Saudi Arabia and Oman are full of “promising investment opportunities” that provide a fertile ground to establish diversified partnerships between the Saudi and Omani business sectors, especially that the targeted investment volume under the Saudi Vision 2030 reaches 12tn Saudi riyals, “while Omani Vision 2040 is full of ambitious targets, such as increasing the foreign investment percentage to the GDP to ten per cent, and increasing the contribution of non-oil sectors to the GDP to more than 90 per cent”.

Eng Redah bin Juma al Saleh, chairman, Oman Chamber of Commerce and Industry, said that the forum and the accompanying bilateral meetings are a confirmation of the two countries’ ambitions to launch joint Omani-Saudi projects that would contribute to economic diversification. “The chamber is ready to support the private sector

and the Omani-Saudi Joint Business Council to provide all facilities, economic advice and support joint investment initiatives,” he said.

According to the Ministry of Commerce, Industry and Investment Promotion, the two sides will continue with their joint efforts to further improve trade relations, partnership and integration in order to achieve common national goals.

The focus will be on to find investment opportunities in the targeted sectors, holding bilateral meetings between businessmen, putting forward sectoral projects of common interest and emphasising the importance of raising the level of cooperation.

On the sidelines of the Oman-Saudi Investment Forum, many bilateral meetings were held at the Oman Convention and Exhibition Center between representatives of the government agencies, Omani businessmen and their Saudi counterparts, which resulted in the signing of a number of agreements and memoranda of understanding between the two sides.

While one memorandum of understanding was signed to extract benefits from the Khazaen project, another one was signed to facilitate the use of services of the Saudi’s ‘Naqil’, besides two other MoUs between the Oman Logistics Services Company and Saudi’s Mandoob and Zajel.