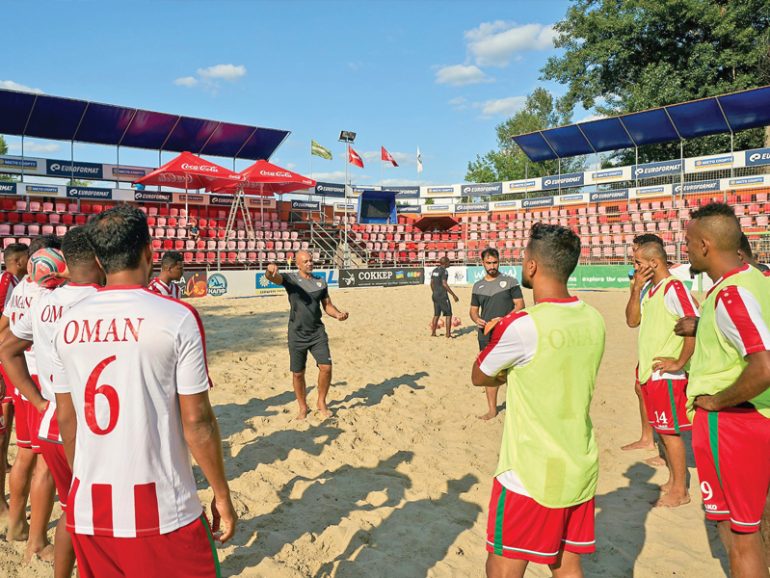 The well-respected Oman beach soccer manager has been with the team since 2008 and over the past 13 years, he has led the ‘Red Beach Boys’ to Asian glory and guided them to four editions of the FIFA Beach Soccer World Cup.

On Friday, he will lead Oman to their opening match against defending champions Portugal in a Group D match at the 11th FIFA Beach Soccer World Cup, which begins on Thursday at the Luzhniki Beach Soccer Stadium in Moscow, Russia.

Talib has been at the helm at three previous World Cup appearances of Oman, with the maiden outing in 2011 (Italy), followed by 2015 (Portugal) and 2019 (Paraguay).

In Moscow, Oman, making their fourth finals of the global beach soccer showpiece, has been clubbed along with two-time winners and holders Portugal, Senegal and Uruguay.

In his remarks to Muscat Daily from Moscow on Wednesday ahead of the team’s game on Friday, Talib admitted that the ‘opener against reigning champions Portugal is a difficult game’.

He said, “They [Portugal] are holders and a heavyweight in beach soccer. We know it is going to be a difficult match to start. But, frankly, at this stage, we face the best in the world.

“The preparations of my team have been good despite the short time available as we began our first camp only during the month of Ramadan in Morocco. Since then, we have played a number of warm-up games and I am happy with my players’

The camp in Morocco was followed by a tri-nation series in the UAE and then a tournament in Kiev, Ukraine, where Oman played against the UAE and Ukraine. Oman also played friendlies against Asian champions Japan, Turkey and Russia during the past few weeks.

Talib said, “My boys are all geared up. We don’t have any big stars with us in the team. But teamwork is our strength. I bank on my boys’ teamwork. It is my weapon and I am confident that we can do well here in Moscow.”

A total of 16 teams are vying for the title in Russia with four teams in four groups battling out for the top two spots in each group to advance to the quarterfinals. Hosts Russia take on US in a Group A match to kick-off the tournament.

Besides Portugal who have won twice, Brazil are the favourites, having won a record five titles. Russia have won twice while France have won once in the ten past editions.

In the three previous World Cups, Oman have never advanced from the group stage. Talib will be relying on the experience of Jalal al Sinani, Yahya al Araimi and Khalid al Oraimi to make a breakthrough to the knockout stage for the first time.

Besides Oman, the other two Asian nations at the World Cup are Japan and the UAE.

In the three World Cup appearances, Oman have recorded so far only two wins. Their maiden victory was against Costa Rica 7-2 in Portugal 2015 and then in Paraguay when they beat Nigeria 6-5. Under Talib, Oman won the Asian Beach Games gold medal in 2008 and then became champions at the AFC Beach Soccer Asian Cup in 2015. Oman also won silver at the Asian Beach Soccer Cup in 2011, and clinched a bronze medal in 2009 and in 2019.

Group A: Russia, US, Paraguay, Japan.