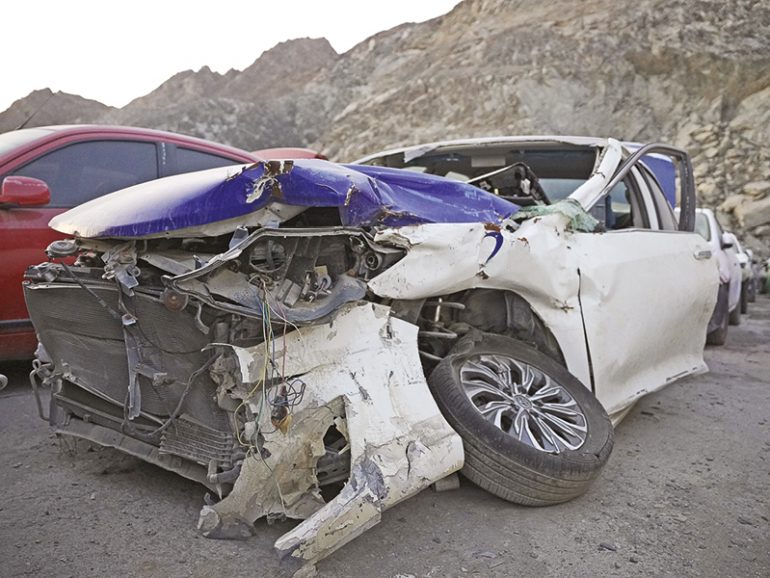 No one passes by here, even pigeons seldom flutter above…there is an eerie silence all around as a vast array of beauties, some of which had once been stunning head-turners, lie lifeless in a desolate yard, awaiting redemption!

Perched on a low hill at the far end of one of the dusty lanes in the Wadi Kabir Industrial Area (popularly known as Sanaya), this ‘car graveyard’ has been home to thousands of cars that have been either written off or abandoned by their owners after unfortunate road accidents. Each of the vehicles sitting ‘pretty’ in this yard have a sordid tale behind them that altered the demeanours and destinies of many a motorist in the capital.

They say, cars are personal ‘companions’ of many young drivers who use them for all their fun-filled endeavours, daily commuting, revelry with friends, obligations and errands, all of which, sort of, personify them. While some people even talk to their cars, others care for them like their own family members and ensure that they are clean and tidy as well as all revved up each day. And, when a fatal accident happens, the cordial ties between man and machine get severed all of a sudden, and many vehicles land up in such yards in their heyday itself.

Called the Al Jazeera Car Yard, this vehicle dump yard is not easy to find as it is cut away from all the industrial activity and garages that dot all the lanes in the Sanaya area of Wadi Kabir. But, if you ask around, the workers in any garage will guide you to it.

But, why would one want to visit a car graveyard? The answer is simple, as many come looking for this place mainly in search of spare parts to replace those in their own cars. Since this is one of the biggest car dumpyards in Oman, it as has over 2000 cars lying there and one can look for suitable door handles, mirrors, bumpers, fenders, bonnets and boot covers, and internal parts of cars of different brands and models of different years, here. Al Jazeera also has branches in Sohar, Nizwa and Ibra that provide a similar service.

Since derailed destinies and hapless twists of fate are associated with most of the accident vehicles, some people would rather not come here for spare parts. But, when you cannot get the exact matching spare part to suit your need, and the respective dealer cannot provide a similar new part, then this yard is one’s only hope.

Cars lying around this yard have smashed window panes, dismantled engines, shattered bonnets and fractured bodies, and the condition of some speak volumes of the severity of the accident it had been involved in. While many people have been injured or lives lost in some of the accidents, the cars, too, have borne the brunt of many a crash, though their own agony remains muted.

Lying over a period of time, most cars are covered with layers of dust. But under the layer of dust one can visualise their own time of glory as many of them look really strong and attractive, except for the mangled portions. One can find cars of some high end brands like BMW, Mercedes, Jaguar, Porsche,  Audi, Lamborghini, Jeep, as well as many muscle cars like Mustangs which have been victims of the whims of errant motorists or their sheer bad luck.

As you pass by the rows and rows of vehicles lying there, you could imagine some of them whispering to you or beckoning you to listen to their sad stories and you even experience goosebumps at the sight of some. The headlights of some seem to stare at you with a deadly gaze and you can even imagine voices in your head as you hurry past them.

The yard is frequented by many garage mechanics from different parts of Muscat who come seeking spare parts for some of their customers as well as buyers of used cars who attempt to repair and renovate some which can be resold to customers of used cars within Oman as well as those from African and Arab countries, especially like Egypt, Jordan and Syria.

Saddam H, the caretaker for the yard, said, “This yard is nearly 20 years old and some cars lying here are 2000 models. From exotic, expensive to budget cars, there are many that have met unfortunate accidents and have been dumped here,” he said, adding that he uses forklifts to arrange them in rows or to move them out when a customer seeks to buy spare parts.

Due to the ongoing pandemic, the number of cars coming to the yard has dropped drastically as the number of road users as well as the number of accidents has reduced, he asserted. “About 15 to 20 cars used to be brought here daily, but now that figure has come down. Most of the causes for the accidents are said to be the craze of using mobile phones while driving,” he said, pointing out that cars driven at top speed often not just lose control but also get other innocent motorists involved in freak accidents,” he said.

After a hurried gaze at the abandoned cars that await willing customers who might give them new life, or at least procure some of their parts in good condition, you want to quickly retreat the area and shake your head to return to reality. But then, as you leave, did you actually see a headlight come on… or hear a horn? Did someone whisper to you ‘come again’ or was it your imagination playing games?

“Drive safely,” you tell yourself and leave.