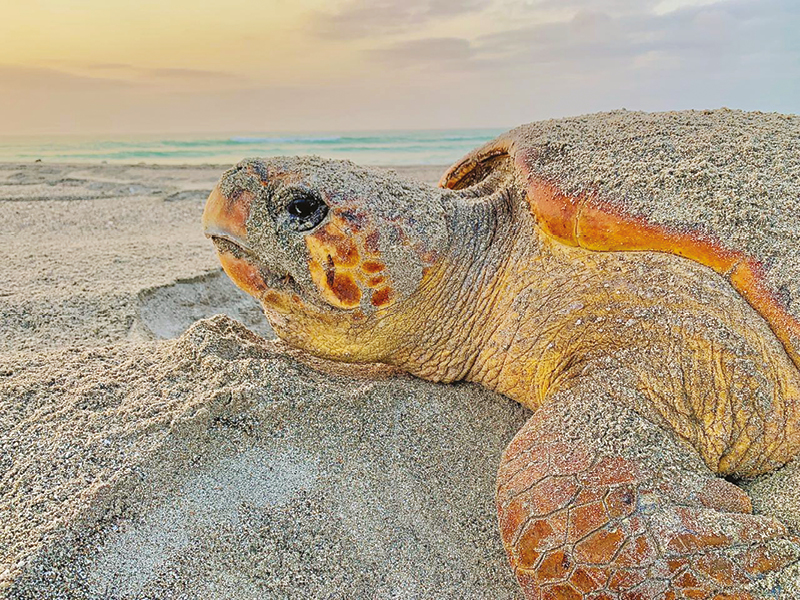 With its pristine beaches and balmy waters, the sultanate offers the ideal home for sea turtles. In fact, it hosts the second largest population of loggerhead sea turtles in the world. It is one of the most important nesting areas for green turtles across the northern Indian Ocean, in addition to two other species – hawksbill and olive ridley – that return annually to nest on its long stretch of coastline.

‘As we celebrate World Sea Turtle Day today (June 16), our attention is drawn to this remarkable species, which has lived in the world’s oceans for over 100mn years, and which faces various threats,’ stated Environment Society of Oman (ESO).

A combination of disturbances like coastal development and beach driving, by-catch (accidental capture of turtles in fishing nets), ghost fishing, light pollution, plastic pollution and climate change are negatively impacting the sea turtles habitat and ecosystem. Each of the four species found in Oman is now listed as threatened (either vulnerable or in some cases critically endangered) on the IUCN Red List, a global repository that categorises the conservation status of different species. Last year, researchers published the disheartening finding that there has been a 79 per cent decline in the nesting population of loggerhead turtles on the island of Masirah, a traditional stronghold over the past few decades.

For the last 13 years, the ESO, in collaboration with the Environment Authority has been trying to counteract this loss, for the sake of conserving the species, of maintaining a healthy marine environment, and of preserving the socio-economic balance of communities. This long-term programme has been funded by the US Fish and Wildlife Service and implemented with the help of local collaborators including Five Oceans Environmental Services and Future Seas SPC.

“Sea turtles play an important role in maintaining healthy ocean ecosystems, as well as being integral to the very delicate food chain. This of course has huge implications for fishing communities, not to mention those who rely on income from turtle-related tourism,” said Suaad al Harthi, ESO’s executive director.

“The situation is extremely worrying, yet it is these communities who are now helping us to rectify it. This is why, we put significant effort into engaging locals, to raising their awareness of the importance of marine turtles, and garnering their support on key conservation actions. Through a holistic community approach, we aim to work together to reverse the declining trend.”

As such, ESO has spearheaded a range of activities including dedicated net clean-ups, awareness videos, community outreach programmes, and several publications.

On the ground, it has assembled a field team of Masirah Island residents to monitor and protect populations, part of its mandate to train and hire Omanis in conservation strategies, community engagement and NGO management, as well as supporting the livelihood of local communities.

The field teams are also supplemented with graduates from ESO’s capacity building programme. These efforts are growing year on year, as ESO focuses on engaging and inspiring the next generation. It continues to accelerate knowledge and understanding of turtle biology, ecology and conservation needs, as well as raising the international profile of Oman’s turtles.

“ESO will advocate for marine turtle populations, but our challenges are far from over. We have to continue this momentum and we know it is only with the involvement of the local community, and by promoting this culture among young people, that we can be successful in conserving our natural resources and ensuring that they are still around for future generations.”