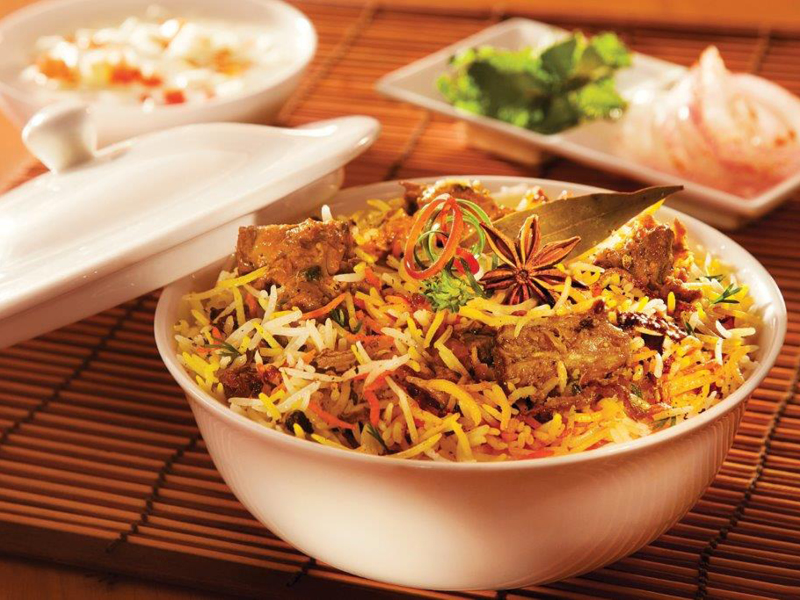 If you are getting set for Eid, planning your festive dinner is a huge part of the preparation – this year only for the family. And what better way to light up your dinner table than with a sumptuous spread of biryani. There are numerous ways in which people prepare biryani all around the world but the basic concept remains the same – meat cooked in a spicy gravy and simmered together with alternate layers of fragrant long-grain rice. Here’s an easy-to-do recipe for mutton biryani that simply cannot go wrong, even if your are a novice in the kitchen:

750g basmati rice – soaked for half an hour

Mix the red chilli powder, coriander powder, salt, tomato, yogurt and ginger garlic paste to the mutton pieces and set aside for at least an hour.

Heat oil/ghee in a large pan and add the bay leaf, cloves, cinnamon sticks, cardamom, shahi jeera and green chilli, and fry for 1minute. Add onions and fry till golden brown. Add the marinated mutton to the onions, mix well, cover and cook on medium flame till mutton is well cooked and the oil start leaving the sides of the pan.

Mix in the lemon juice, coriander leaves and mint leaves. Switch off the flame and set aside while you get the rice ready.

Boil sufficient water in a large vessel to cook the rice. Add salt and a tbsp of oil to the water. (The oil helps to keep the rice grains separate.) Add rice to the boiling water and cook to 70% doneness.

Now, in a large pot, add half of the cooked mutton with gravy. Add a layer of partially cooked rice over it. Add a teaspoon of ghee and a few mint leaves on top of the rice. Then add the second half of the mutton and cover with final layer of rice. Again, top with a teaspoon of ghee and few mint leaves. Cover lid and seal edges with foil to prevent steam from escaping. Simmer on low flame or place on a hotplate (tawa)and cook on low heat for 15 minutes.

Marinate the mutton with curds and spices overnight to tenderise it.

Add juice of half lemon to the boiling water of the rice for a good flavour and to prevent the grains from sticking to each other.

Mutton can be replaced with chicken pieces – cooking time would decrease.

For garnish, slice two onions, fry them till golden brown, and spread on top of the rice layer after the final simmer.

Optional – peel 2-3 medium sized potatoes, cut in half and add halfway when mutton is cooking.

Biryanis around the world

It was initially conceived as a dish under Asaf Jaha I, the appointed Governor of Deccan by Aurangzeb. The usual components of the dish are rice, meat (gosht) and spices. The pakki biryani comprises cooked rice and cooked meat made in alternative layers and cooked on a flame. The Hyderabadi Biryani is rendered spicy than any other form of Biryani.

The Lucknowi Biryani was as grand as a royal dish could go, but in terms of taste and not spices. It has a mild flavour and is comparatively lighter on the stomach.

A very popular dish among the community of Malabar Muslims, this variation of the dish originated in Kerala. Although the components of meat and spices are similar to the other varieties, how this biryani differs from the others is by the choice of its rice. They use an unusual type of rice grain known as Khyma, a small- grain thin rice.

This is a Biryani flavoured in Pakistan, as it prevailed in the previously known Sindh region of the country before the partition. It has since then, evolved to become a significant part of Sindhi and Pakistani cuisine. Truly exotic in taste, this biryani is a treasure of sorts for its aromatic spices and flavour.

Kashmiri cuisine faces a mix of influences over time. The first of biryanis were a result of the Mughal Emperor’s frequent visit to the heavenly state of Kashmir which used to be a retreat. Other than the royalty of the Kashmiri Biryani, it stands out for the addition of asafoetida.

The Bombay Biryani is derived from the Irani style of Biryani. It is accompanied with a side of meat gravy. The Biryani in question is sweeter and contains more oil and fried onions than the other varieties

This is a type of biryani in which (unlike other biryanis which use cooked or semi-cooked rice) raw chicken and raw rice are both cooked simultaneously in a sizzling, spicy gravy. Traditionally, itis cooked in clay oven and the cooking pot is sealed with flour dough to allow the biryani to cook in its own steam.

Afghanistan has its own variant of biryani. The Biryani there has a stronger use of saffron for colour and highly employs the use of dry fruits in the preparation.

A little on the sweeter side, Kolkata biryani is full of surprises, just like the city’s locals. A soft boiled egg and huge chunks of potatoes are the heroes, which the meat supports

Traditional Iranian style biryani layered with marinated fish and fried onions. Topped with raisins and cashews. The aroma of rose water is beautiful in this biryani recipe.

In Nepal it’s usually made with rice, chicken, cashewnuts, green beans, carrot with an added range of spices, such as cardamom, bay leaves and coriander. Tourist versions of Chicken Biryani in Nepal often add an egg or extra cashew nuts.

We find mainly two kinds of Biryanis in Sri Lanka – One where the chicken and rice are cooked together and served together, and the other type, mostly sold in restaurants, which serve Biryani rice separately with fried chicken on the side.

Kao mok gai is the Thai version of chicken biryani which literally means “chicken buried in rice”. It is usually made with chicken drumsticks and rice. The dish was probably bought to Thailand by Muslim Indians but it is today enjoyed by all Thais.