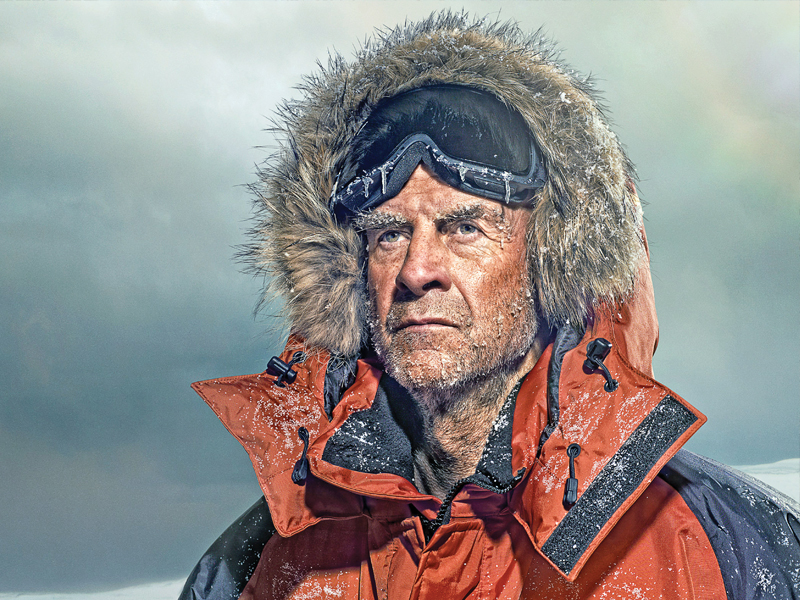 People flock around Sir Ranulph Fiennes with raised eyebrows, dropped jaws and pure admiration when he talks. The feats of ‘the world’s greatest living explorer’ (Guinness Book of World Records, 1984) are the stuff of folklore. The first to reach both poles, the first to cross the Antarctic and Arctic oceans, the first to circumnavigate the world along its polar axis – the latter feat never successfully repeated… Sir Ranulph has experienced what no man has before him.

The living legend was in Muscat earlier this month when he reminisced about his first visit to Oman more than 50 years ago. Deputed by the British Army to the army of Sultan Said bin Taimour, he commanded the Reconnaissance Platoon of the Muscat Regiment and fought off insurgents in Dhofar for which he was decorated for bravery. The day he arrived in the sultanate was very hot – it may have been the hottest time of the year, he recalls.

“There was no air conditioning. And the only place we went to before going south was Bidbid. In my room in Bidbid there was a spider, the biggest spider I’d ever seen. British spiders are small. So the heat and the spider were the first impression.”

In a reflection of the rapid changes in the region, he remembers an incident when he was tasked by Sultan Said bin Taimour to lead the Reconnaissance Platoon up Wadi Jizzi to Buraimi and further on to Dubai to meet the commander of the Trucial Oman Scouts (present day United Arab Emirates Armed Forces) on an urgent matter. “When I got as far as the place called Dubai, there was one house bigger than a single floor. And the people in the locality were angry with that man, because they said he was trying to get closer to God. That was 1968. It changed quickly.”

When he left the army after serving for eight years, it was with the experiences of late-60s and early-70s Oman that sowed the seeds of exploration of remote parts of the world. He went back home, got

married to his childhood sweetheart Ginny Pepper and soon realised they had no money. Armed with his experiences, knowledge of Morse code and radio equipment, and Ginny’s fluency in Arabic, they decided to embark on sponsored expeditions that took them all around the world.

Mad, bad and dangerous to know

He met Ginny when he was all of 12, she nine. His future father-in-law immediately warned his daughter that young Ranulph was ‘mad, bad and dangerous to know’. That became the title of one of Sir Ranulph’s autobiographies published in 2007. He has to his credit 25 other books.

In 2000, during an attempt to walk solo and unsupported to the North Pole, Sir Ranulph’s sleds fell into the icy sea. To retrieve his supplies, he was forced to pull them out with his bare hands. Exposed to -63°C, he sustained severe frostbite to the fingertips of his left hand compelling him to abandon the attempt. Back home, his surgeon insisted on waiting five months to allow regrowth of the remaining healthy tissue before amputating the necrotic fingertips. The dead fingers “stuck out like mummified talons” and caused him agony. When Ginny observed that it was making him irritable, Sir Ranulph sawed off his frostbitten fingers with an electric saw. The thumb took two days.

Among his numerous fabled feats is one leading the team that discovered the lost city of Ubar on the Yemeni border in 1992 after seven previous search expeditions over a period of 26 years. Malik al Hinai, former director of Bait al Baranda Museum who was then working with Oman International Bank, was appointed by the sultanate’s government to assist Sir Ranulph in the mission in 1990. “His charm came through during our meetings with corporate chairmen whom we went to seeking funds for the project. We would get absolutely whatever we requested. It made life very easy and understandably so as the project was fascinating,” Hinai said during a lunch he hosted at his residence for Sir Ranulph on his recent visit.

His charm had other effects, too. Among six final contenders to play James Bond, Sir Ranulph eventually lost out to Roger Moore. “Many years later, I saw him at an airport. I hadn’t realised but he must have been at least 6’5” or 6’6. (Moore was 6’2’’.) He was very… like a gentleman, more than the previous… Sean Connery. But I liked Roger Moore, Sean Connery and Daniel Craig. I wasn’t very happy with the man called George Lazenby,” he informed. There are other Fiennes who have become film actors, including his cousins Joseph and Ralph.

7 marathons on 7 continents in 7 days

He has, however, beat other illustrious folk to prestigious titles. He won the ITV Greatest Britons 2007 Sport Award beating, among other nominees, Formula 1 world champion Lewis Hamilton. The award was in recognition of the Land Rover 7x7x7 Challenge of 2003. Three-and-a-half months after a heart attack, three days in coma and a double bypass procedure, the 59-year-old Sir Ranulph and Mike Stroud, an expert on human health under extreme conditions, ran seven marathons in seven consecutive days on all seven continents raising funds for the British Heart Foundation.

Since the early 1990s, he has raised funds for several charities and been named the UK’s top celebrity fundraiser by JustGiving, a popular online fundraising platform. Ginny died in 2004 from stomach cancer, diagnosed the day after Sir Ranulph returned from the 7X7X7. He lost his sister and mother, too, to cancer all within the space of 18 months and has since been raising money for Marie Curie, a British charity that provides care for terminally ill patients.

At last count, he’d raised £18.9mn in all for various charities, but the figure he wants on his gravestone is £20mn. Age has come in the way of unfinished agenda, including the Global Reach Challenge for Marie Curie which started in 1982. On completion of the challenge, Sir Ranulph will become the first person to have crossed both polar ice caps and climbed the highest mountain on each continent. He has three more to climb but age “has a bad effect on getting up these mountains. I’ve had a couple of heart attacks, a double heart bypass, a cancer operation and this diabetes thing that doesn’t help in the cold. So while other people my age are sensibly enjoying their retirement, I’m taking this challenge. It unfortunately really isn’t going to be easy”, he states in his website.

‘Everyone’s grandmother can do Everest…’

But Sir Ranulph has raised funds even in his failed attempts. In 2005, he climbed Mt Everest but 300m short of the peak, he developed a heart problem. He abandoned the attempt but raised £2mn for the British Heart Foundation. In his second attempt at Everest three years later, he returned from 400m to the summit due to bad weather. He still raised £2mn for Marie Curie. A year later, he finally summited Everest at the age of 65 – the oldest Briton to do so. While he still suffers from vertigo, apparently “everyone’s grandmother can do Everest over a weekend nowadays”. A sought-after public speaker, Sir Ranulph leaves audiences in splits with his dry wit.

Being driven by his wife was his most frightful experience, claims the man who has defied limits of human determination and endurance.

Many of his gruelling challenges predate the technologies available today – satellite navigation, satellite phones, GPS and the like. “At the end of the day, when you’re completely tired, you can go to your tent, have a cup of coffee, switch on your sat phone and speak to your commander, not Morse code… Or switch on your sat nav and it’ll tell you quickly where you are… everything is much easier now.

“When we were doing 2,000 miles with nothing to see except white, every two miles or 20 minutes, I’d stop and look back at the other two; keep a mile between each of them and I could see the degree we had come. If I was 2° out, I would compensate for that 2° in the next two miles. That’s how we reached the South Pole accurately traversing all that distance with nothing to see, just by using the sun behaviour,” Sir Ranulph recalled.

Back to the present, asked for a message for young Omanis, he said, “They are lucky to be in the best country in the world that I’ve visited. And to have a wonderful succession of rulers and governments. Long may the system here continue and they keep the peace between other people who are angry and nuclear. So thank God for (the late Sultan) Qaboos and people who behave like him and his successor. Thank God for Oman.”