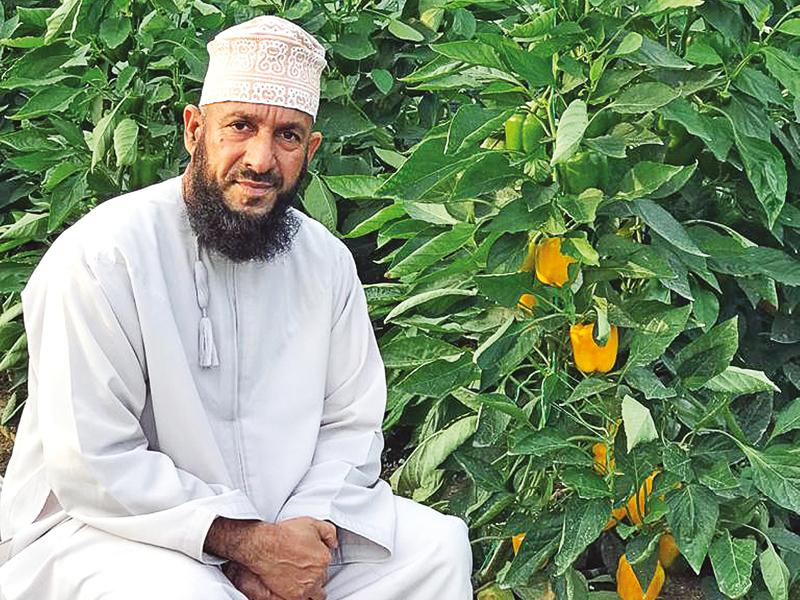 Farmer Khamis Saleh al Salhi from the wilayat of Suwaiq, North Batinah, has cultivated peppers on 21 acres of land. If the size of his farm isn’t a first for an Omani farmer, the quality of his produce and its wide market probably is.

The idea of planting Omani peppers emerged following Salhi’s interactions with the Omani Agricultural Association and specialists who recommended diversification of crops with the aim of increasing food security in keeping with most country’s efforts to achieve self-sufficiency in food production.

Speaking to Muscat Daily, Salhi said, “I’ve been farming for 30 years, but started growing peppers more recently for additional income. I grew peppers on three acres in the first year just to know about the crop. I had to understand all the agricultural and market requirements of the crop, starting with planting of seeds right through to harvesting and delivery to markets. Now we cultivate four types of peppers – red, orange, green and yellow – on 21 acres for eight months a year. Our daily produce is around ten tonnes.”

Peppers from Salhi’s farms are currently sold in local markets, besides being exported to neighbouring countries as well as afar as Germany and Japan.

“I have visited some European countries to learn about their farming methods with different types of vegetables. The sultanate grows a wide variety of vegetables from November to June and has achieved self-sufficiency,” Salhi said.

Talking about the challenges he faced in 2020, he said, the outbreak of the COVID-19 pandemic affected his business, more so in selling produce.

“We grow other vegetable crops as well, including lettuce. We have stopped lettuce cultivation now as some insects have acquired immunity to pesticides. We are currently working on greenhouses in our farm. We rely on modern agriculture methods, such as drip irrigation. These reduce effort, time and labour.”

Salhi informed that the Ministry of Agriculture, Fisheries and Water Resources has played an important role in his business. “The ministry offers us integrated programmes, helping us till the land and equipping us with a modern irrigation systems and organic fertilisers.”

He is also grateful to the Omani Agricultural Association for its supports and for conducting meetings among farmers to exchange experiences to find solutions for the issues they face.

“I call on jobseekers to work in agriculture. It is profitable work. We should not leave this work to expatriate labourers. Our land is a treasure for future generations. Many countries depend on agriculture as the main source of income,” Salhi said.

“We sell our produce in the vegetable and fruit market in Mawaleh, but also promote it in various commercial centres.

“I urge citizens and residents to purchase Omani products, especially vegetables and fruits.”

The agricultural sector’s contribution to the GDP increased from RO416mn in 2018 to RO433mn in 2019, recording a growth rate of about four per cent, according to Ministry of Agriculture, Fisheries and Water Resources figures. The total production in 2019 was 3,018 tonnes, compared to 2,951 tonnes in 2018, recording a growth of 2.3 per cent.

“This increase in productivity is a result of the use of modern technologies by agricultural companies and individual farmers. It has contributed significantly to increasing the volume of agricultural production,” an agricultural sector official said.