Birth of a legacy 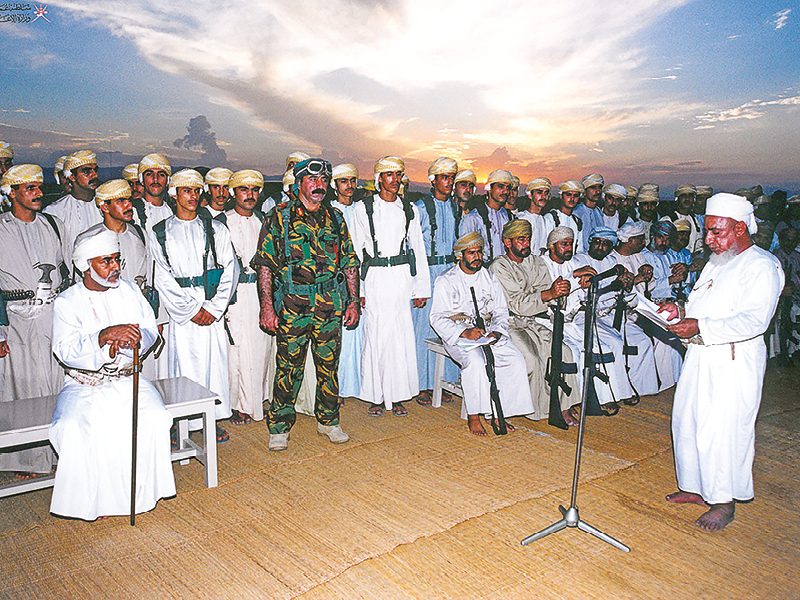 In his first address to the nation, The Late Sultan Qaboos declared that the country would be unified as the Sultanate of Oman and he ended restrictions on freedom of movement

The Late His Majesty Sultan Qaboos bin Said was born in Salalah, Dhofar, on November 18, 1940. He was the only son of the late Sultan Said bin Taimur and the eighth direct descendant of the royal Al Busaidi line founded in 1744 by Imam Ahmad bin Said.

The Late Sultan Qaboos spent his childhood in Salalah, receiving education in the Arabic language and religious studies in private lessons as well as attending the Saidia School.

When he turned 16, his father sent him to a private school in England. In 1960, the Late Sultan Qaboos entered the Royal Military Academy Sandhurst as an officer cadet. After passing out of Sandhurst, he joined a British Infantry battalion deputed to Germany for a year. He also held a British Army staff appointment.

Following military service, the Late Sultan Qaboos studied local governance in England and, after a world tour, returned home to Salalah in 1964 where he pursued Islamic studies and the history of the Sultanate of Oman. On the abdication of his father and his subsequent accession on July 23, 1970, he arrived in Muscat to implement his vision for the country’s development.

In his first address to the nation, he declared that the country would be unified as the Sultanate of Oman, with a new flag, and he ended restrictions on freedom of movement. Additionally, he called on Omanis who had left the country to return home in order to contribute to the challenges that lay ahead and to use their talents and expertise to modernise a once powerful nation that had fallen into poverty and decline.

Man of many interests

Speaking about his hobbies, the Late Sultan Qaboos once said, “Since my early childhood, I have had a strong love for horse riding. I was put on a horse when I was just four. Since then, I continued to see horse riding as a hobby that fits my natural penchant for adventure. However, my practice of this hobby dropped to minimum levels due to my ever-extending schedule of duties. But no matter what, horse riding remains close to my heart.”

Being a trained military man, he also counted shooting as a hobby. “Shooting constitutes a major priority for anyone who has an interest in military activity and who lived in a society like Oman’s whose people take pride in being able to take up arms when necessary. In fact, I have a flare for trying any new firearms, which might be a rifle, a machine gun or a tank. But traditional shooting with a pistol, a shotgun or even a crossbow remains my best distraction.

“There are other hobbies that interest me, like walking, which has remained one of my best pastimes since childhood. I get comfort in walking, particularly before going to bed. I like to go for a walk along the beach. In addition to being one of the best exercises for one’s body, walking also offers a chance for meditation.

“I also like photography, which I see as an extension of my lifelong hobby of drawing natural scenery. However, present conditions and time constraints give little scope for practise such hobbies.

“Reading, which was among my favourite hobbies, has become part of my work. It is difficult for me to continue to read what I like (as a hobby), as focus has shifted to reading within the purviews of work and everyday life concerns.”

“Also, as an amateur, I play tennis if I get the time. I often watch international tennis games on TV, and I like to follow up athletics on sports channels.

“Astronomy remains among my keen interests – stargazing and planet watching continue to attract my attention. I have a small observatory, fitted with a telescope that I wish to improve in the future. When meteorological departments announce clear skies, I take time to watch the marvelous celestial bodies and ponder on the deep universe around us.”