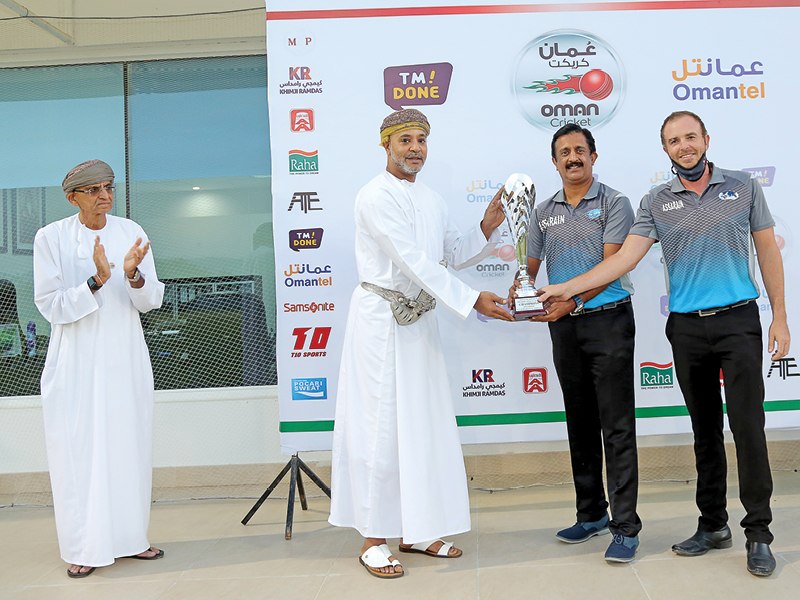 Assarain CT has been a dominant force in the domestic top-flight cricket over the recent years and has been one of the teams that have sent in a number of players to the national side.

Held over three days to avoid large gatherings, the annual OC awards ceremony this time, is a sedate affair due to the coronavirus pandemic. Sayyid Qais along with OC secretary Madhu Jesrani were present to honour the first batch of awardees on Tuesday with Passage to India Al Sawadi’s Khawar Ali named the Most Valuable Player (MVP) of the season.

Speaking to Muscat Daily, Mathew said, “It is a great feeling to receive the trophy along with captain Gustav. We worked hard over the years and the success in recent times has been due to the strong backing from our management.

“The trophy is another glorious addition to our bulging cabinet as over the recent years, we have been winning quite a handful of them, thanks to our

“This is our third title since 2016-17 and though we are not playing this season, nine of our players are with other top-flight teams and have also bagged Oman Cricket contract.”

Mathew said that he was unable to comment on whether the team will make their return for the next season. “A better idea on our team’s comeback would be possible only next July,” he said.

Passage to India (PTI), which received the Premier Division runner-up trophy on Tuesday, had a reason to cheer as the team’s allrounder Khawar picked up the most coveted individual award of the 2019-20 season.

PTI, like Assarain, have also pulled out of the 2020-21 season but Khawar, has continued with his rich form from last season with his new employers – IT Works – this season as he played  a lead role in IT Works’ win over AER on Saturday.

A Division toppers Arm Alpha and AER were presented the winner and runner-up trophies. Danish Mohammed of AER received the best batsman award while the best bowler prize went to Chetan Mallya of Arm Alpha.

In the Senior Cup knockout, Zubair CT and LC Tech were named joint winners while in the Junior Cup, Design Group and GITACS were declared joint winners. ACT and Basta took the top-two awards in B Division.