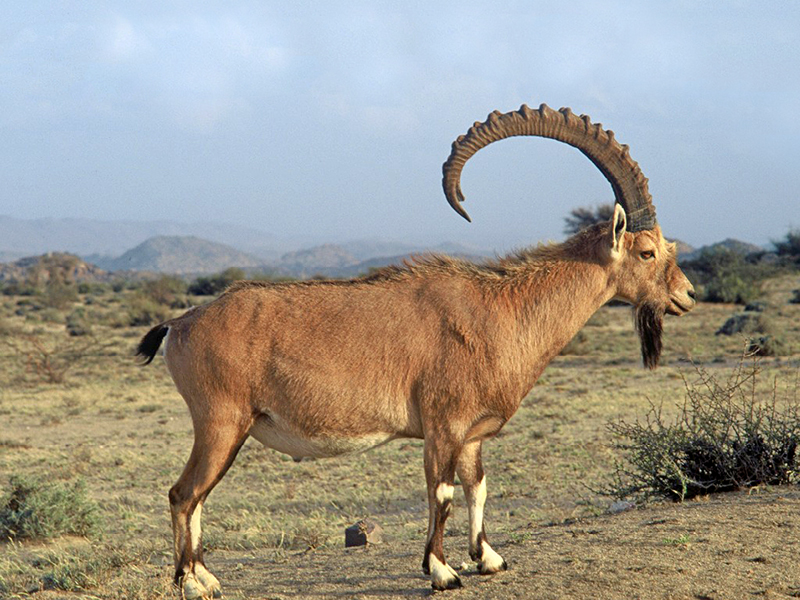 The Office for the Conservation of the Environment at the Diwan of Royal Court, along with the International Union for Conservation of Nature (IUCN), has called for strengthening protection measures for Nubian ibex around the world and the need for further studies to conserve the antelope that is threatened with extinction.

The latest IUCN assessment (March 2020) on Nubian ibex – Capra nubiana – estimates the population to be less than 5,000 mature individuals. ‘In the last ten years, the population has declined towards numbers more closely associated with the ‘Endangered’ classification. It is likely that with more information, the species may fit the Endangered classification. Presently, the species is listed as ‘Vulnerable’ on the IUCN Red List,’ the report on the IUCN Red List of Threatened Species 2020 stated.

Data from Office for the Conservation of the Environment’s own research suggests that 12 years since the last update on the Nubian ibex on IUCN Red List, its status remains Vulnerable.

According to the IUCN report, there is a lack of population data currently for some parts of the Nubian ibex range. ‘Evidence suggests they are extremely rare and in decline in Sudan, Eritrea and Yemen. Its populations have declined in Saudi Arabia, Oman, Jordan and Egypt due to hunting pressure and competition with livestock; the population is stable in Israel.’

In the majority of the species range, they are threatened and with little effective conservation action or stewardship, the report added.

Nubian ibex occur in Egypt (east of the Nile), Israel, western Jordan, central Saudi Arabia, central and southern Oman and in eastern and central Yemen. Its status in Sudan, northern Ethiopia and Eritrea is currently unknown; it has been extirpated from Syria but is currently being reintroduced into Lebanon.

Nubian ibex have been reported in the western Hajar Mountains of northern Oman. There are local reports and rock paintings depicting Nubian ibex in the central Hajar Mountains region. ‘However, as there is only one official sighting from this region, it is possible they never occurred in the Hajars and its historical presence requires further evidence. Currently, Nubian ibex are patchily distributed along the Huqf escarpment and Janaba Hills in the Central Desert of Oman, and in the mountains of Dhofar from north of Jebel Samhan to the border with Yemen. They may also be present in Ras Madrakah,’ the report said.

In Oman, the population of Nubian ibex is decreasing due to poaching, the report added. ‘The decline has been confirmed using camera trap surveys in Al Wusta Wildlife Reserve, and the situation is likely to be the same in the Dhofar region. In the coastal hills south of Al Wusta Wildlife Reserve, there have been no records for some time. At best the population is very low in this area. Further south in Wadi Shuwaymiyah, the ibex population is unknown, but likely exists in low density.

‘South of Shuwaymiyah in Dhofar is prime habitat for ibex. This habitat extends across the Dhofar Mountains to the edge of the desert in the Negd, and south to the Yemen border. The Dhofar population is the largest in Oman with numbers in the region of 600 to 1,100 individuals. Approximately another 100-250 ibex exist in the Huqf escarpment and Janaba Hills, in and surrounding Al Wusta Wildlife Reserve.’

In Oman, ibex are fully protected by law throughout the country, but actual protection has not been adequate to prevent the decline of the species by poaching, stated the report. ‘This is partly due to inaccessible and isolated habitats where Nubian ibex occur. Research is currently ongoing in Al Wusta Wildlife Reserve in order to understand critical habitat needs and prioritise ranger patrols for ibex protection.’