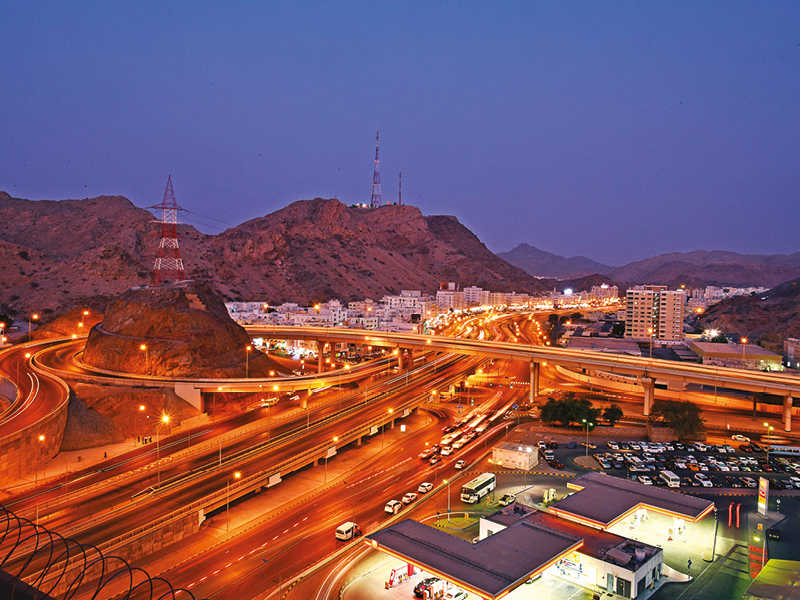 Crisscrossing the length and breadth of the country, straddling mountains and wadis as well as the vast expanse of its desert heartland, Oman’s road network goes everywhere and has grown beyond expectations. Being a lifeline for the movement of goods, services and people, it is vital for expansion of development and in turn the economic prosperity of the country.

In 1970s, there were only 10km of paved and 1,700km of unpaved roads in the country. In just 50 years, the Ministry of Transport, Communications and Information Technology expanded and modernised all the main and secondary roads to link rural areas with the urban centres of the country.

According to available data, the ministry had supervised works on 15,646km of asphalt roads and approximately 17,135km of secondary roads as of December 2018.

In the beginning of 2020, the ministry opened the Sharqiyah Expressway for traffic, a 191km stretch between Bidbid and Al Kamil W’Al Wafi. Designed to the highest international specifications and standards, the expressway includes two tunnels of 2.1km total length. The first tunnel of 650m is located in the village of Nadab in Samayil, while the second tunnel situated in the Al Aqq mountain range runs a length of 1,450m. The project also includes bridges over wadis at a height of 90m.

With logistics emerging as one of the key non-oil sectors contributing to the country’s diversification drive, the strategic Batinah Expressway project – a 270km road starting from Muscat Expressway at the Halban interchange running till Khatmat Malaha in Shinas – offers the vital link that connects the rest of the GCC states with the help of bustling ports of Sohar and Duqm.

Batinah Expressway has four 3.75m-wide lanes on either side, 3m external shoulder, 2m internal shoulder, 23 interchanges, 17 flyovers, 12 underpasses and 25 wadi bridges. It is considered one of the national milestones now facilitating fast-track movement of goods and people between Musandam, Buraimi, North and South Batinah and Muscat governorate.

Muscat Municipality has been a key player in the development of Muscat governorate with significant achievements that stand out and reflect meticulous planning.

Its achievements become even more extraordinary considering its long list of tasks and responsibilities in construction and pavement of roads, supervision of building construction as well as ensuring preservation of Omani structural designs.

One of, but not the only, achievements of Muscat Municipality in the recent past is the completion of flyovers at several roundabouts in Sultan Qaboos Street in Muscat. To cope with increasing traffic, all the major roundabouts have been supplied with traffic signals to prevent jams and prepare for more tourist activities and projects.

The Muscat airport interchange, designed to the latest engineering standards, is an ideal solution to traffic jams. The project includes construction of a flyover across the Sultan Qaboos Street, to ease traffic between Muscat and Seeb, and link Muscat Expressway.

Another highlight of Muscat’s road network is the Amerat-Bausher road project, which links the two wilayats and eases traffic. The picturesque road, running 6km through mountains, has become the most preferred route for motorists.

Additionally, the dual road Amerat-Quriyat 70km project starting from Amerat police station linking the Quriyat-Sur road has made driving from Muscat to Sur now possible in less than 90 minutes. It serves as a convenient and quick alternative to the congestion-prone Bidbid–Sur carriageway.

The ever-expanding road network provides access to a number of seldom-visited but potentially important archaeological, ecological and environmental sites along the Quriyat-Sur coastal belt.

Other notable projects of Muscat Municipality include construction of the 7km Bandar Jissah–Yiti road that opened up new areas in Muscat governorate for tourism development. The road enables convenient and speedy access to, among other areas, an integrated tourism resorts project in Yiti.

As part of its beautification drive, Phase II of the Muttrah coastal road, which shows the municipality’s keenness to stay in tune with the latest trends in landscaping projects and modernisation of utilities and services, is also a milestone.