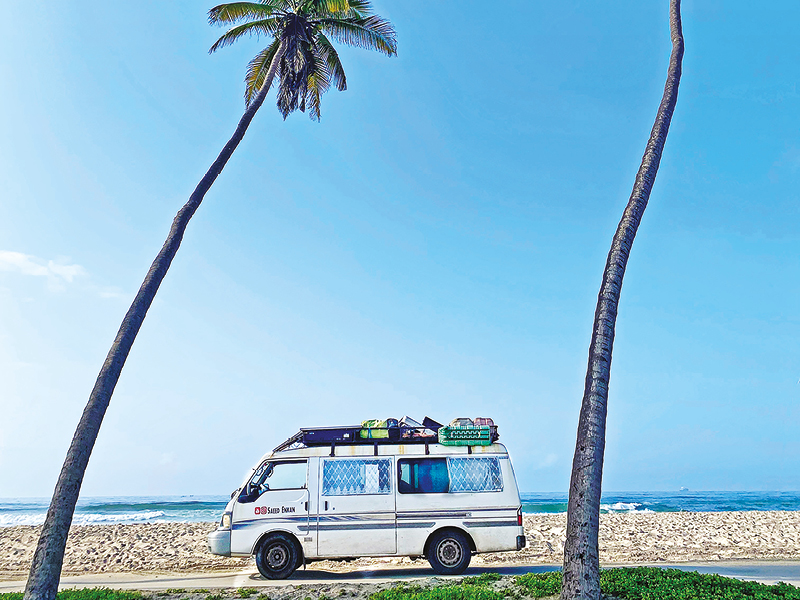 To promote domestic tourism and showcase Oman’s unique attractions, Saeed Abdullah al Ghafri, 30, from the wilayat of Ibri, started a trip seven months ago. He is driving through Oman’s varied landscapes, sharing his experiences on social media.

In 2016, Ghafri resigned from his job as a steward with Oman Air to achieve his lifelong dream of working as a tour guide and camp organiser.

He facilitated trips of tourist groups from several countries in the past. The trips included camping, hiking and swimming in picturesque locations such as Jebel Akhdar, Jebel Shams and Dhofar.

Speaking to Muscat Daily, Ghafri, said, “I shot films of the tourist trips and posted them on social media such as Instagram, Facebook and Twitter, to which many tourists responded from different parts of the world. Unfortunately, I had to cancel all the reservations of foreign tourists due to COVID-19.”

Despite the setback, Ghafri set off on a trip across the sultanate in his van called Bus al Jeeb (The Wonder Bus) to promote tourism in March this year.

“The plan is to drive through all the northern governorates of Oman, in particular. I shoot films of the picturesque places and nature on the way. I am now camping in the wilayat of Dalkout in Dhofar,” said Ghafri.

“The trip aims to promote tourism by exploring Oman’s pristine coasts and documenting our traditions and customs, addressing the need to preserve the environment.”

Talking about his van, he said, “My camper has kitchen utensils, a small oven, a gas cylinder, a small refrigerator, a place to sleep and also a small office. I have installed solar panels on the roof of the van for electricity at night.”

He camps from two days to a month at a spot, documenting it through video and photography. “When I camp for a long time, I enjoy hiking, swimming, fishing, climbing mountains, discovering caves and valleys in the area.”

Besides the reservation cancelations, he suffered another setback when his photography equipment was damaged.

“This trip in the van is expensive. I need financial support from some private or government agencies to complete my trip and promote the sultanate as a tourism destination,” Ghafri informed.

His experiences during similar trips abroad, including Austria, Czech, Germany, Italy, London, Malaysia, Poland, Singapore, Switzerland and Thailand are helping him in his current excursion. He counts an earlier drive from Muscat to London in a Land Rover as one of his most memorable.

His current trip too has left him with a few unforgettable experiences. When Bus al Jeeb’s wheels sank into sand in a remote place, he was forced to camp at the location for long during which time his supplies ran low. But the situation wasn’t without a silver lining – he learnt fishing as he had to fend for himself.

Another situation he’s unlikely to forget in a hurry was encountering four wild wolves when he was camping in an isolated location in Dhofar.

No matter what the odds, Ghafri is determined to continue his trip, shooting and filming in the wilayats of the sultanate to document authentic Omani customs and traditions, the diverse and unique landscape and rich natural heritage.

“I hope the concerned authorities provide some services that are needed in tourist places and spread awareness on preserving the Omani environment,” he said.