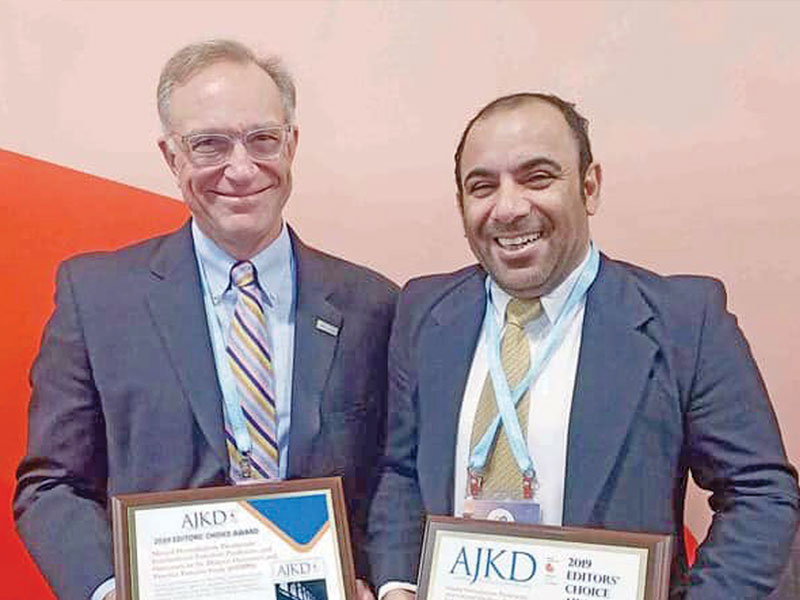 Dr Issa al Salmi, senior consultant (Medicine-Nephrology), at The Royal Hospital, has been chosen by the American Journal of Nephrology to receive the ‘Editor’s Choice’ award. It is one of the most important international scientific periodicals dealing with kidney disease and its treatment.

Dr Salmi’s research was chosen from among 1,000 other papers, which is considered a new international scientific achievement for the sultanate.

Dr Salmi said that the award focuses on choosing the best research and studies published during the year and it checks as to what the best research specialised in kidney disease is and assesses the benefits it offers to patients.

Dr Salmi was the main researcher for the winning study with a group of researchers from different countries regarding kidney failure, especially in hemodialysis. The study included patients from America, Canada, Europe, Japan, Russia and a number of Gulf countries. Dr Salmi presented the findings of the research, stating that kidney patients in the sultanate and the Gulf countries are fewer than the ones in America, Europe and Japan. As for the percentage of cases of kidney failure, they are equal in the sultanate and the Gulf countries. However, the percentage rate of anaemia is more compared to other countries. The rate of thyroid hormone elevation was much higher than in other countries. This indicates that calcium and phosphorous salts could not be controlled during the dialysis process. The study also showed the prevalence of psychological conditions in patients.

The study indicated that kidney patients in the sultanate are among the patients who go through dialysis a few times per week due to logistical factors.

The sultanate is currently working to improve the condition by establishing units for dialysis and raising the number of beds, and the usage of new drugs.

Dr Salmi asserted that the research found that the patients who miss the dates of dialysis are usually children and suffered kidney failures.

They often live in areas far away from the dialysis centres and do not have easy means of transportation.

The research suggested setting up a mechanism to encourage patients, which includes educating them, refering them to  specialists, improving services and providing necessary logistics to them.