Sultanate to recover 5,000 meteorites from Switzerland 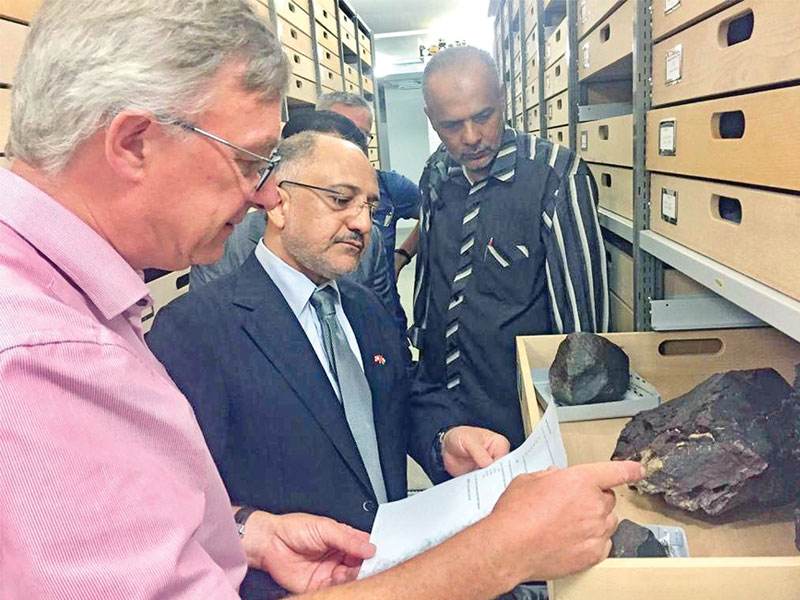 The Ministry of Heritage and Culture (MHC) is planning to recover 5,000 meteorites from Switzerland.

H E Salim bin Mohammad al Mahrouqi, Undersecretary, MHC, said, “The ministry is seeking to recover 5,000 meteorites from Switzerland. Some of these meteorites are pieces of Mars and some are parts of the Moon. The size of the meteorites vary with some weighing more than 10kg.”

H E Mahrouqi said that these meteorites will be brought back from the University of Bern and the Natural History Museum in Berne.  He explained that the ministry has chosen a suitable location to store these meteorites under appropriate conditions. The Omani-Swiss meteorite search project has been ongoing since 2001, and a Swiss team was in the sultanate beginning 2019 to collect meteorites.

According to Beda Hofmann, University of Bern, the Oman meteorites collection is unique. “Our collection is incomparable with any of those found in other hot desert regions of the world.”  Hofmann explained that the finds provide evidence of approximately 1,000 meteorite showers – more or less equivalent to the number of showers observed globally in the last 200 years.

Sayh al Uhaymir (SaU) 169: The lunar meteorite weighing 206g was discovered on February 16, 2002. This meteorite is made up of KREEP, the material which was the last to crystallise when the moon solidified.

Shisr 043: The iron meteorite weighing 8.4kg discovered on January 21, 2003, is the only fresh iron meteorite to date amongst the over 39,000 meteorites from Oman contained in the Meteoritical Society’s database.

Jiddat al Harasis (JaH) 091: The strewn field was discovered in October 2002. The largest strewn field in Oman has a length of 52km. The over 700 stones found here together weigh at least 4.5 tonnes. The shower was about the same size as that which fell on February 15, 2013 near the Russian metropolis Chelyabinsk.