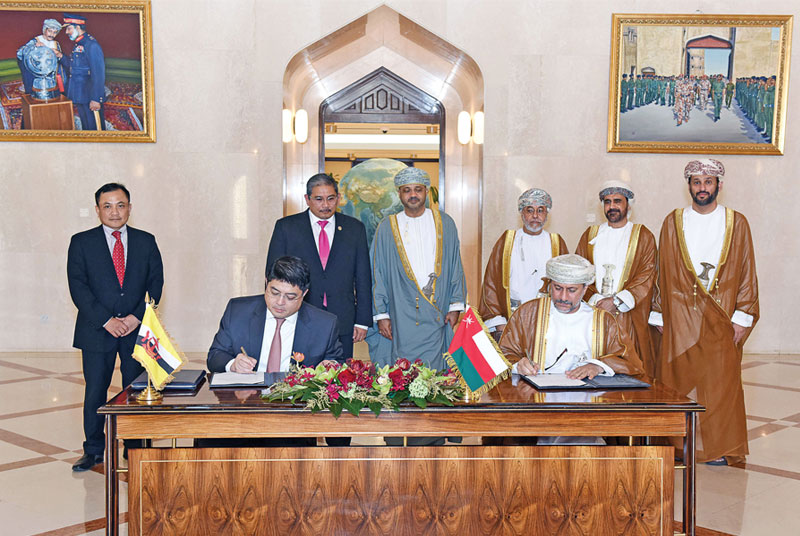 The State General Reserve Fund (SGRF) and Brunei Investment Agency (BIA) on Sunday announced that they have signed an agreement to increase the share capital of their joint-venture firm Oman Brunei Investment Company (OBIC) to US$200mn from US$100mn.

A definitive agreement in this regard was signed between the representatives of both companies on the sidelines of the 19th consultative meeting held on Sunday in Muscat.

On behalf of the SGRF H E Abdul Salam bin Mohammed al Murshidi, CEO of the fund signed the agreement while on behalf of BIA, Mohammed Sufyan Jani, acting general manager of BIA and the chairman of the board of OBIC signed the contract.

Speaking at the event, H E Murshidi, said that the decision to increase the share capital of OBICO was taken to strengthen and increase the investment base of the joint-venture company as it intends to explore new sectors for investment in both countries, especially in the fields of education,agriculture, food and services.

He said, “OBIC has invested in nine projects in Oman since its establishment ten years ago, most importantly Kempinski Hotel Muscat, the European Hospital, currently being built in Ghubra, and the water desalination plant in Sohar. It has also exited from three investments so far yielding good returns.

This year, we are pleased that OBIC has acquired 50 per cent share of Golden Corporation, a company that specialises in providing high-quality seafood products and is based in Brunei Darussalam, its first investment in Brunei.”

Jani from BIA also expressed his happiness on the development. Explaining the future strategy of the joint-venture firm, he said, the signing of the agreement is the culmination of the cooperation reached between the sultanate and Brunei in the field of investment and related fields.

He described OBICO as a unique model among the sovereign funds of two countries, and said that the joint venture will continue to make maximum use of commercial opportunities available in both countries.