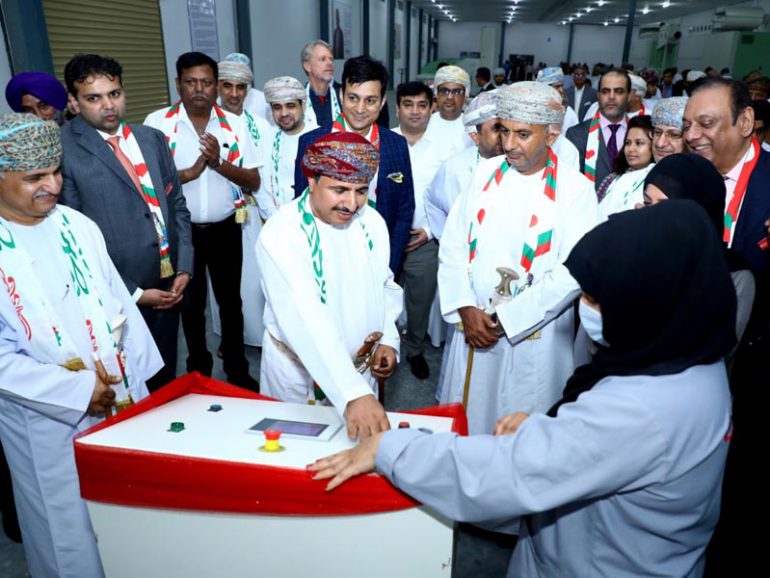 The inauguration marks an important milestone for the sultanate as the nation celebrates the 49th National Day in the blessed march towards continued economic diversification, growth and prosperity.

ChiragPittie, managing director of SV PittieSohar Textiles welcomed the guests to the facility and extended warmest felicitations to His Majesty Sultan Qaboos bin Said and the people of Oman on the occasion of the 49th National Day.

He said, “The Unit No 2 inaugurated today consists of latest, state–of-the-art automated technology in the textile industry. The compact cotton yarn produced in the unit will be high premium grade with raw materials namely organic cotton being imported from the US, Australia, and Turkey whilst the finished product would be exported to Pakistan, Bangladesh and China.  As a 100 per cent export oriented unit, I am delighted to highlight that the finished product labeled for the first time as ‘Made in Oman’ would generate significant revenue of approximately US$240mn.”

Speaking at the inauguration, VinodPittie, chairman, ShriVallabhPittie Group, said, “This is a proud moment for the SV Pittie Group, SV PittieSohar Textiles, our employees, and the people of Oman as we inaugurate Unit No 2 at the only textile cluster of its kind anywhere in the GCC region. On the historic occasion of the 49th National Day of the country, we dedicate this facility towards the further progress and prosperity and economic development of this country.”

Accompanied by the chairman and the management team, the guest of honour and the dignitaries were given a tour around the state-of-the-art production facility. Elaborating on the details, VinodPittie added, “The opening of Units No 1 and 2 have been well ahead of promised schedules and production has commenced earlier than envisaged. SV PittieSohar is a 100 per cent export-oriented Omani textile company setting up an integrated textile cluster in Oman. Units 1 and 2 have a combined capacity of 1,50,000 spindles and 3,500 rotors for cotton yarn manufacturing.”

SV PittieSohar Textiles is part of ShriVallabhPittie Group, a more than 100 years old group and one of the largest manufacturers of compact cotton yarn in the world.