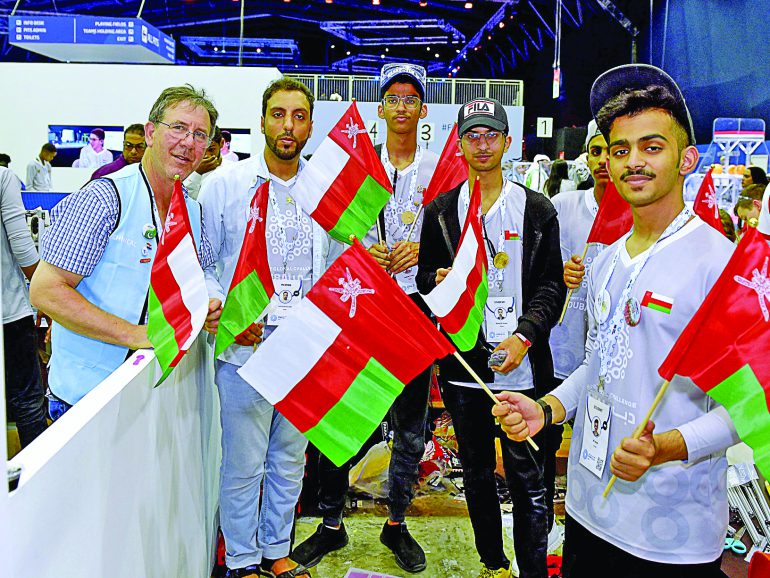 ‘Oman is the gift of the sea,’ said members of Team Oman at the FIRST Global Challenge 2019 in Dubai that ran under the theme ‘Ocean Opportunities: United by land, connected by oceans’.

The annual competition is the world’s largest gathering of young creative minds in the fields of robotics and artificial intelligence.

This year’s edition brought together more than 1,500 students from 191 countries to build robots that can clean up the oceans from micro and macro-pollutants.

To get into this year’s FIRST Global Challenge, they had to pass the national qualifying round with a focus on four areas – programming, design, language, and social networking. According to Nasser, his team’s goal is to find a real solution to ocean pollution, especially plastic waste that kills whales after they ingest it in large quantities.

Meanwhile, Ahmed believes that saving the oceans should be the main priority for countries of the GCC region.

The boys cite the perilous future of the rare Arabian humpback whale as an example of why this year’s event matters to the region, and especially Oman.

The unique species, discovered in late 20th century by marine biologists in the Arabian Sea, lives in a genetically isolated group and represents one of the most striking mysteries of the whale world.

Unlike other whales that roam the world’s oceans in search of food and breeding partners, this whale doesn’t migrate. To preserve such a species is of paramount importance.

According to Team Oman, the sea has always been intertwined in Oman’s history, civilisation, and heritage, a source of its wealth, a workplace for its seafarers, who have travelled ports across the globe, and a route for its merchant ships that traverse the waters to pursue trade with Asia, Africa, and Europe.

The boys stress that protecting our seas and oceans requires effective solutions to problems such as global warming and plastic pollution.