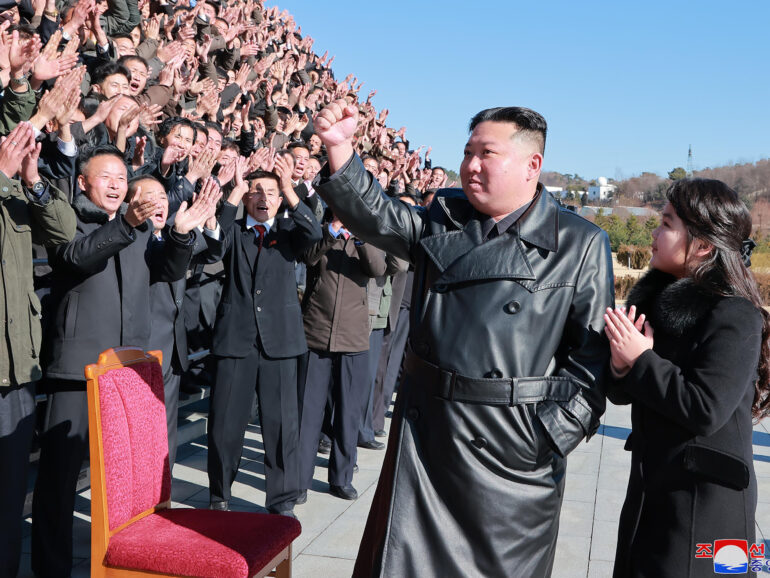 Seoul, South Korea – North Korean leader Kim Jong Un said his country aimed to have the world’s most powerful nuclear force as he celebrated the launch of its newest intercontinental ballistic missile at a ceremony with his young daughter, state media reported on Sunday.

Kim also handed promotions to more than 100 officials and scientists for their work on the Hwasong-17 – dubbed the ‘monster missile’ by analysts and believed to be capable of reaching the US mainland – just days after Pyongyang test-fired it in one of its most powerful launches yet.

Hailing the new ICBM as ‘the world’s strongest strategic weapon’, Kim said North Korean scientists had made a ‘wonderful leap forward in the development of the technology of mounting nuclear warheads on ballistic missiles’, the official Korean Central News Agency (KCNA) reported.

Building the nuclear force to protect the dignity and sovereignty of the state and the people ‘is the greatest and most important revolutionary cause, and its ultimate goal is to possess the world’s most powerful strategic force, the absolute force unprecedented in the century’, Kim was quoted as saying in his order promoting the officials.

The leading officials and scientists had demonstrated to the world Pyongyang’s ‘goal of building the world’s strongest army’, he added.

The launching vehicle for the new Hwasong-17 ICBM was awarded the title of ‘DPRK Hero’, a separate KCNA report said, using the initials for the North’s official name.

It ‘clearly proved before the world that the DPRK is a full-fledged nuclear power’, the report said, adding the North ‘fully demonstrated its might as the most powerful ICBM state’.

Hong Min of the Korea Institute for National Unification said the North’s trumpeting of the Hwasong-17’s test-firing was aimed at elevating its status as a nuclear power.

“If the (launch of the) Hwasong-15 in 2017 was focused on becoming a nation that can threaten the US mainland with nukes, the latest missile is focusing on becoming the most powerful ICBM state,” he said.

The UN Security Council has passed nearly a dozen resolutions imposing sanctions on North Korea over its nuclear and missile activity since 2006.

Attending a photo session on Saturday with officials and scientists who had contributed to the successful test-firing of the missile, Kim called for ‘limitless bolstering of the defence capabilities’, KCNA said in another report.

Kim exhorted the scientists and workers to ‘expand and bolster up the nuclear war deterrent of the country at an exceptionally rapid speed’.

The official Rodong Sinmun newspaper carried more than a dozen pictures of Kim at the photo session with his ‘beloved daughter’, who was revealed to the world for the first time at last week’s ICBM launch.

Until then, North Korean state media had not mentioned Kim’s children, and last week’s report was the first official confirmation that he had a daughter, experts said.

The photos showed the girl – believed to be Kim’s second child, named Ju Ae – dressed in a black coat with a fur collar, linking arms with her father as they posed in front of the gigantic missile surrounded by uniformed soldiers.

Yang Moo-jin, a professor at the University of North Korean Studies in Seoul, said the daughter’s presence was meant to portray Hwasong-17 as ‘the protector of the future generation’.

“It looks like he will continue to parade his daughter on various occasions and use her as a means for propaganda,” he added.

The November 18 ICBM test was the latest in a record-breaking blitz of missile launches by Pyongyang, with officials and analysts in Seoul and Washington warning they could culminate in a seventh nuclear test by North Korea, which last tested an atomic device in 2017.