Omani and US firms urged to take advantage of FTA 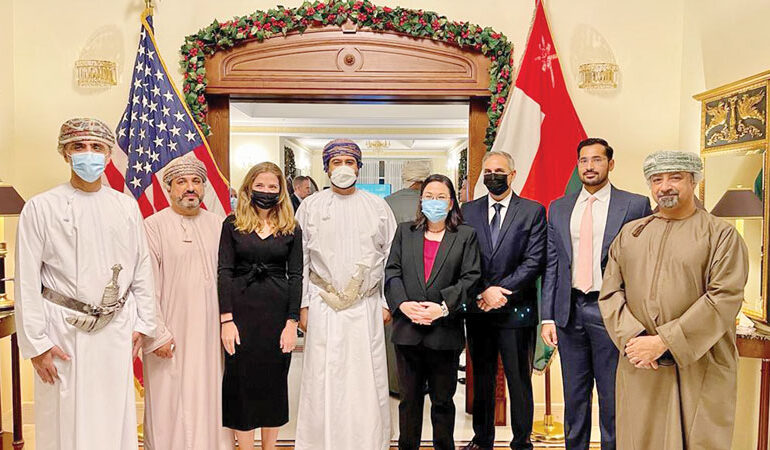 Muscat – The United States and Oman are celebrating 12 years of trade under the US-Oman Free Trade Agreement (FTA), a bilateral accord that lowers trade barriers between the two countries.

Since taking effect in 2009, the FTA has benefitted both countries by boosting trade and investment and creating jobs. Despite its success, the FTA remains an untapped resource for companies in both Oman and the United States. With this view, the Oman American Business Center (OABC), in partnership with the US Embassy in Muscat and the Ministry of Commerce, Industry and Investment Promotion (Tejarah), launched a video campaign last week to raise awareness of the FTA and encourage more firms to take advantage of it.

Titled ‘Success Stories of the US-Oman FTA,’ the video seeks to raise awareness of the FTA by introducing viewers to companies that operate in Oman and have successfully exported products for sale to the United States duty free, imported products from the United States duty free, or otherwise benefited from the FTA. Funded by a grant from the US Embassy, and in partnership with Tejarah, the video features remarks from Oman’s Minister of Commerce, Industry and Investment Promotion H E Qais al Yousef, United States Ambassador to Oman H E Leslie Tsou, and OABC chairman emeritus and president Ali Daud.

“The FTA has greatly benefited Omani companies, as well as the US and international firms,” Daud said. “But it is important to remember that the FTA has also increased the overall amount of foreign direct investment into Oman and created opportunities and jobs for Omanis over the past 12 years.”

“The United States is the world’s largest economy, and Oman is one of just 20 nations – and two in the GCC – that enjoys free trade in this unique way. We are very excited to shine a spotlight on just a few of the many success stories of the US-Oman FTA and look forward to inspiring similar stories in the years to come,” Daud said.

Ambassador Tsou encouraged more Omani and American companies to take advantage of the FTA, whose many benefits include duty-free treatment of goods and a no-minimum investment requirement for new businesses.

“The FTA is a pillar of the strong economic partnership between our two countries and provides opportunities to expand prosperity for companies large and small in both Oman and the United States,” she said. “The US embassy is working closely with the Omani government, the OABC, and other business organizations to strengthen the FTA to benefit both our economies.”

As part of Tejarah’s goals to attract investors and spotlight opportunities for companies in Oman, the video will be shown at the Oman Pavilion at EXPO 2020, attracting the attention of millions from around the globe.

Commenting on the FTA anniversary, H E Qais al Yousef, Minister of Commerce, Industry and Investment Promotion said, “On this the 12th anniversary of the Oman–US free trade agreement, we celebrate not just this landmark agreement but also the longstanding relationship between our two countries.”

H E Yousef said, “The friendship between us is not the only reason American businesses choose to invest in Oman – also playing an important role is the strength of the sultanate’s competitive offer, its pro-business government, strategic location, seamless access to regional markets, world-class infrastructure, skilled talent and the strength and ambition of Oman Vision 2040, the sultanate’s blueprint for social and economic development.”