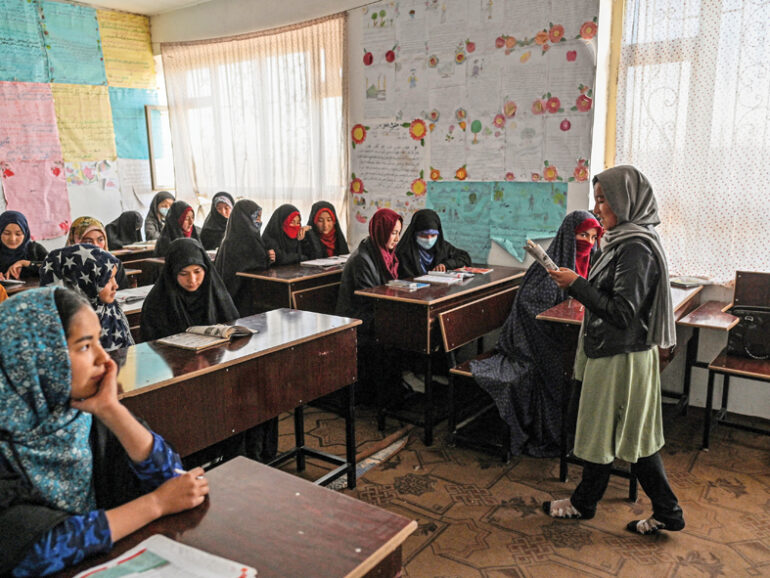 Nawabad – When the Taliban overran Nawabad village in central Afghanistan, lessons carried on at the local girls’ secondary school – in stark contrast to most of the country where older girls have been barred from secondary education.

The school has remained open to teenage pupils because it is run by an NGO, exposing the contradictions emerging across Afghanistan as its new rulers’ orders are implemented.

“The (Taliban) came and saw the students and classes and they were happy because we all had our hijab,” Forozan, one of the young teachers, said.

Since taking control in August, the Taliban have imposed severe restrictions on women and girls, despite pledging a softer rule compared with their first stint in power in the 1990s.

In several provinces, local Taliban authorities have been persuaded to reopen schools – but millions of girls still remain cut off.

In Nawabad, the school is run by the Swedish Committee for Afghanistan (SCA), an organisation active in the country for four decades.

It is in Ghazni province, which the Taliban have long controlled part of, and where they have largely tolerated girls’ schooling.

In Langar, another village in the district, the only class for girls and young women at another SCA-run project is continuing.

“When the Taliban took Kabul we had no hope that they would let the school continue – but they did,” said 18-year-old Mahida.

Her class is made up of 18-26 year-olds who missed out on education and are now gearing up for end-of-year exams.

“We were afraid to go to school. We couldn’t get out of our home because of the war,” Mahida said.

All of the girls in Langar hope to continue their studies, to become teachers, doctors or engineers.

But they don’t even know if they will be able to sit university entrance exams.

Even before August, many girls in Ghazni province were deprived of any secondary education at all because of distance, poverty, early marriage and conflict.

Some 6km away in the remote village of Jangalak, 19-year-old Zahra, an aspiring engineer, attends an SCA-run class for students who have gaps in their education.

The Taliban approved her and others’ schooling, though classes on civic pride and patriotism were replaced by religious instruction. “I see the Taliban every day when I come to school,” Zahra said. “[They] have no problem with us.”

But in the same building, other female students who were previously enrolled in state-run classes have been stuck at home since the takeover.

Education Ministry data for 2016 indicates less than one in five Afghan women can read and write, compared with more than 60 per cent of men.

Sat at a restaurant in the city of Ghazni, the Taliban’s deputy provincial head of culture sought to justify the suspension of schooling.

“We have to find money to pay salaries for the teachers,” Mansoor Afghan said.

School curriculums also still need to be assessed as ‘good or bad’ and more teachers employed, he added.

Taliban spokesman Suhail Shaheen said that he expects high school-age girls to return to class in the spring.

Even if they do, the next steps dreamed of by the ambitious girls in Langar and Nawabad – university and a professional career – seem more out of reach.

Since August, women have once again been largely barred from work outside the education and healthcare sectors.

Many are sceptical about pledges from the Taliban, who failed to live up to promises of women’s rights during their last rule.

The hope is that the group’s battle to gain international recognition and get aid flowing back into one of the poorest countries in the world will lead to concessions.

“We hope they will reopen the universities and when we finish high school we will be able to go without any problems,” said 17-year-old Shafiqa, sat in the front row of the Nawabad class, who said that she wants to be a doctor.