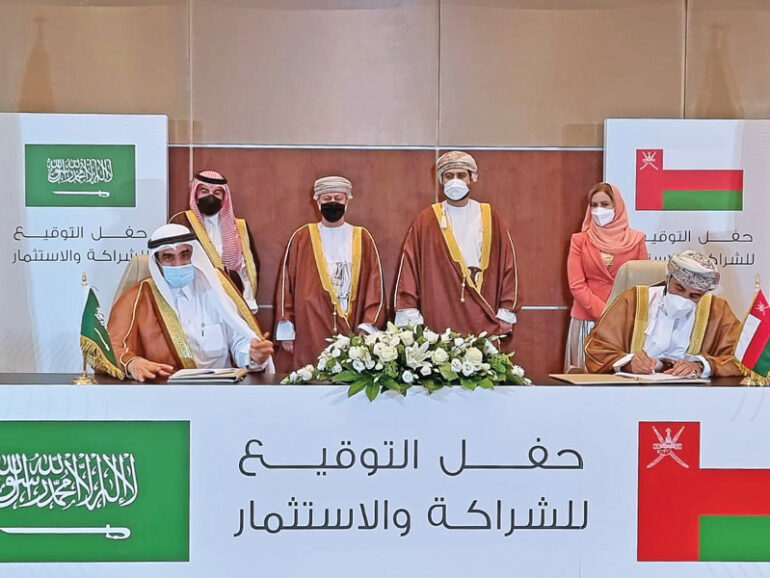 The MoUs were signed by several companies owned by Oman Investment Authority and the private sector with their Saudi counterparts.

Three MoUs were signed by the OQ Group; one related to petrochemicals, renewable energy and green hydrogen with Saudi ACWA Power and Uber Products Company, and the second in the field of oil storage with Aramco Trading.

Asyad Group and the Saudi Maritime Transport Company signed an MoU in the field of dry dock, logistics and maritime transport, while Minerals Development Oman (MDO) signed an agreement with Saudi Maaden Company to assess exploration and development opportunities in the mining sector.

The Omran Group signed an MoU for investment in the Yeti Integrated Tourism Development with Dar al Arkan of Saudi Arabia.

An MoU was also inked in the field of fish farming between Fisheries Development Oman and Saudi Naqua, and another between Muscat Stock Exchange and the Saudi Tadawul Group with the aim of cooperation in stock exchange operations and dual listing of companies.

The Oman ICT Group and the National Technology Group of Saudi Arabia signed an MoU in the field of information technology, while Khazaen Economic City and Naqel Express inked an agreement to establish a logistics complex in Khazaen City.

International Company for Project Development and Al Khorayef Petroleum of Saudi Arabia signed an agreement in the oil and gas sector.

OQAL Oman and OQAL Saudi Arabia inked an MoU in the field of entrepreneurship.

The 13th MoU was between Omani Integrated Logistics Services and Saudi Arabia’s Zajil in the field of logistics and transportation.

H E Asila bint Salim al Samsami, Undersecretary for Investment in the Ministry of Commerce, Industry and Investment Promotion, informed that the MoUs aim to strengthen economic ties and encourage investment between the two countries.

According to Badr al Badr, CEO of Saudi National Companies Promotion Programme, the value of the MoUs is expected to exceed US$10bn.