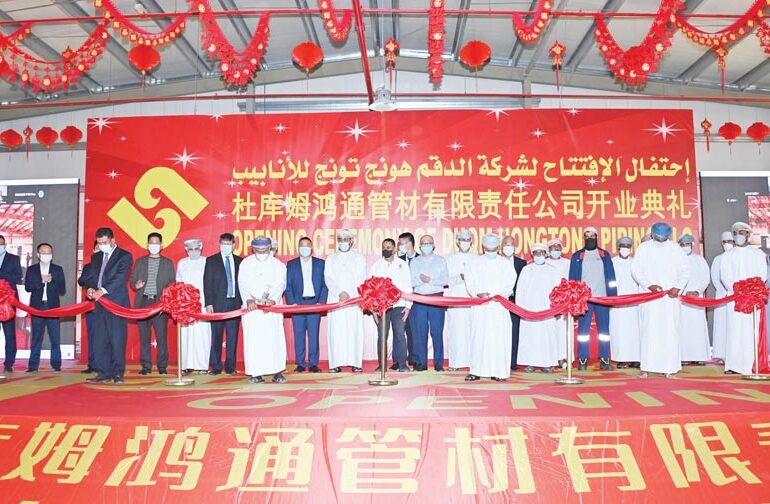 Duqm – The Special Economic Zone at Duqm (SEZAD) on Monday celebrated the opening of Duqm Hongtong Piping Factory, under the patronage of Eng Yahya bin Khamis al Zadjali, in-charge of managing the operations of SEZAD.

The first-of-its-kind factory in Oman stands as the first project in the Sino-Omani Industrial Park in Duqm. The factory produces non-metallic Reinforced Thermopolyethlene Pipes (RTP), which are mainly used for oil and gas industry and specifically for the collection and transfer of hydrocarbon fluids through the piping networks, a press release said.

General manager of Duqm Hongtong Piping Company, Dr Shao Longnan, said, “We are pleased to be the first in the sultanate to bring this business, which meets the increasing demand for the RTP pipes in Oman and the region. This project will serve transferring and exchange technologies from China to Oman for it will thrive the oil and gas industry with our products and contribute to the in-country value through the training and offering job opportunities.”

Zadjali said, “This factory marks one of the main projects in the Chinese-Omani Industrial Park in Duqm, which will play a significant role in meeting the demand for this product by the various economic projects in the zone and oil and gas firms operating in the concession areas.”