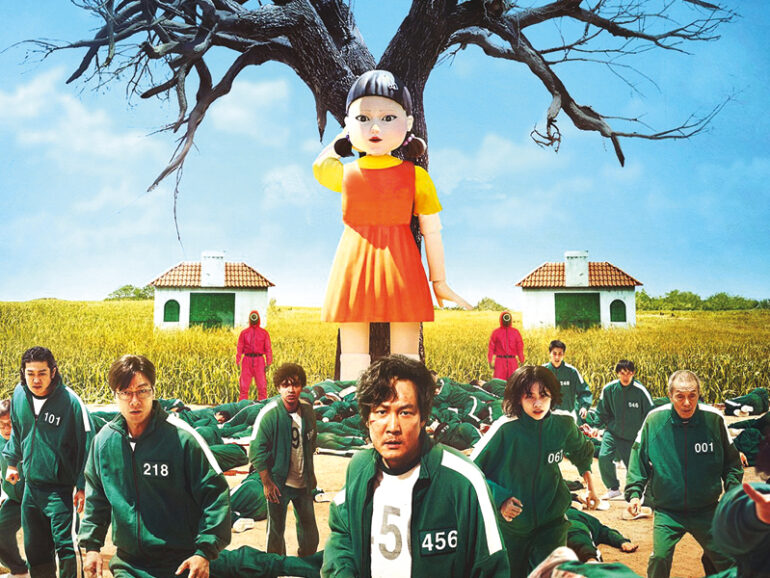 Muscat – Dark, eye-opening and twisted, Squid Game has been topping Netflix charts for weeks, and Oman is no exception. The Korean show has become Netflix’s biggest show ever, gripping the attention of its 80+ million viewers from the day it was released on Netflix, alongside boasting a Rotten Tomatoes rating of 91 per cent.

Squid Game unfolds primarily in the eyes of protagonist Seong Gi-hun, a man who is soft at heart, but deep in debt thanks to his horse-betting problem. He is constantly beaten up due to his crippling debt. He meets a mysterious man at the train station who gives him the silliest proposition: Every time Seong flips the man’s ttakji, he gets 100,000 South Korean won.

Ttakji is a popular Korean game where two people take turns flipping origami disks by slapping one on top of the other as hard as they can.

After continuously losing, a red-faced and defeated Seong is ready to give up. At this point, however, the mysterious man offers a card to Seong, and from that point start the games that Squid Game is known for. Without any spoilers, the show is known for taking children’s games played in Korea and turning them into survival, fight-for-your-lives games.

Being a show set completely in Korea, subsequently using the Korean language to communicate, it is surprising to see such an incredibly dark story almost surpassing Oscar-winning film Parasite’s popularity in just a few days.

A few Omani students spoke about why they thought the show had an iron grip on Oman.
Shadha al Rawahi, a student of College of Banking and Financial Studies, said, “The idea of desperate people consenting to a dehumanising game for the sake of money is so depressing. But the overall storyline still kept me in progressive suspense with every episode. I noticed that there is some similarity between it and Escape Rooms as well as Alice in Borderland, which also I enjoyed watching.”

Ahmed Abdul Amir al Ajmi, a sales promoter, said, “I liked the Honeycomb episode. It seemed pretty simple but intense. I didn’t like when Seong Gi-Hun was separated from his daughter, but all in all, I enjoyed the show a lot and can’t wait for the second season if there ever will be one.”

Amira Yaqoub al Balushi, a BCom third year student, admitted that “the plot revolving around a deathly game kept me interested me to watch”.

“The characters’ survival instincts were also really interesting to see,” she added.
The characters picked to play these games are all miserable individuals wallowing in deep, almost deadly debt. Each round survived ultimately leads to the final game; if you lose a round, or don’t complete the game within the time limit, you are shot and killed by the ominous guards in red.

The Dalgona Candy episode – where the participants had to carve out a shape from Korean sugar candy – especially caught the attention of many viewers, inspiring them to try the game at home as well, only without running the risk of being killed if they were unsuccessful.
The final round is the Squid game itself, which is set in a handmade shape on the ground like hopscotch, but with completely different rules, and whoever is left standing at the end takes the 46,500,000,000 South Korean won (RO15,207,850) prize home.