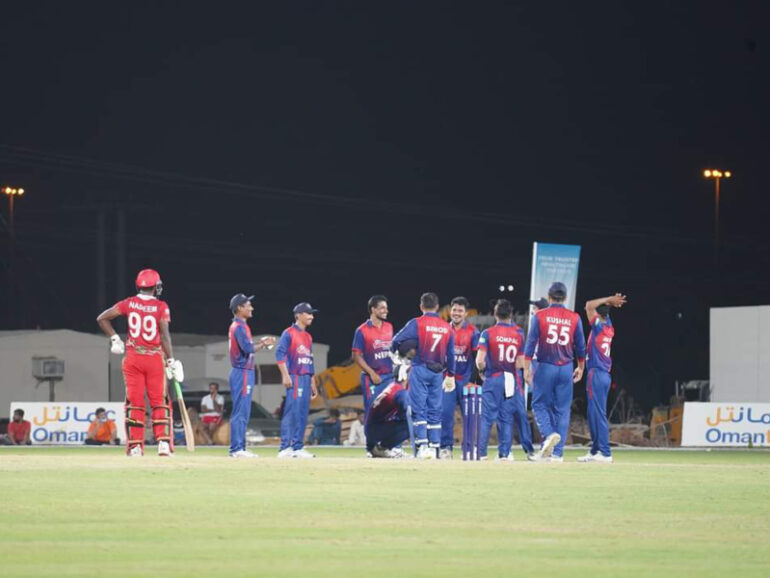 Oman’s six-match winning streak in the ICC WCL 2 series was halted by Nepal at the Oman Cricket Academy Ground on Sunday as Dav Whatmore’s innings as Nepal’s head coach ended on a victorious note.

Nepal cruised to a seven-wicket win, reaching the paltry victory target of 121 in 18.2 overs, with skipper Gyanendra Malla hitting an unbeaten 52.

Oman’s previous defeat in the WCL 2 tri-series was against Namibia at the same venue on January 8, 2020. Since then Duleep Mendis’ boys have won six on a trot. The only other reverse for Oman came against hosts Scotland in Aberdeen on August 18 in 2019.

Despite the loss, Oman stay on top of the standings with 20 points from 13 matches while the USA are second with 14 points from 15 games. Following the win against Oman, Nepal climbed to fourth and now have eight points from eight matches.
On Sunday, Nepal bowlers – pacer Karan KC and leg-spinner Sandeep Lamichanne – grabbed four wickets each while off-spinner Sharad Vesawkar claimed two as the hosts struggled against a disciplined bowling attack.

Oman skipper Zeeshan Maqsood made a valiant 41 while Jatinder Singh (13), Kaleemullah (11) and Naseem Khushi (12) were the only other three to reach double digits.

At one stage, Oman were reeling at 64 for seven in 22 overs but Maqsood shared valuable partnerships with Khushi, and then with Kaleemullah, to take the team past 100.

Nepal’s chase was never in trouble despite Kaleemullah getting rid of opener Kushal Bhurtel cheaply with the score at 16. Aasif Sheikh and Malla then stitched a 95-run stand before Nestor Dhamba sent back Sheikh (40) but Nepal were on course for an easy victory.
Nepal’s first ODI win against Oman since 2013 also ended their six-match losing streak to the hosts in 50-over games.

It was also a fitting and winning farewell gift given by Nepal players to their head coach Whatmore. The 67-year-old had announced that he would quit as head coach after WCL 2 tri-series in Oman. The former Sri Lanka, Bangladesh, Pakistan and
Zimbabwe coach, was appointed as Nepal’s head coach in December last year. He had taken over after Nepal were without a head coach for around ten months following the resignation of Umesh Patwal.

Also on Sunday, allrounder Sufyan Mehmood was handed his ODI debut for the hosts.

Oman take on the USA in the final game of the first of the back-to-back WCL 2 tri-series on Monday. The next tri-series will feature Oman, Papua New Guinea (PNG) and Scotland and will begin on September 25.