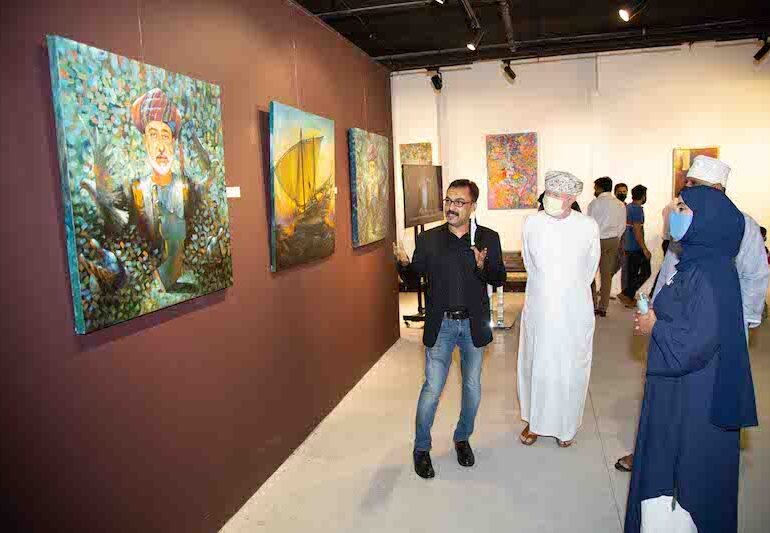 Indian artist Sheffy Tattarath, who believes that artists draw inspiration from everything around themselves – be it people, nature, happenings positive and negative, as well as inanimate things that ‘speak’ to them – has unlocked his collection of vibrant paintings conforming to various themes in one comprehensive exhibition that opened in Muscat last weekend.
The exhibition, titled ‘Symphony of Colours’, was inaugurated by Maryam al Zadjali, director of the Omani Society for Fine Arts on September 15, at Art & Soul gallery in Water Front mall, in Shatti Qurm. It marks Sheffy’s 50th exhibition in Oman – his sixth solo exhibition – and will be on till September 26.
You need to take just one cursory glance around the gallery to realise the multiple facets of Sheffy’s brush strokes that evoke varied emotions in the viewer. Artist Sheffy, who has been in Oman for a long time and experimented with every possible theme he could in the sultanate, has put up a wide collection of paintings that convey shades of times gone by, as well as the present which, he says, is invariably and intricately connected with the past.

Lost in a whirlwind

On display, you can find intriguing portraits of common persons conveying varied emotions as well as esteemed images of Oman’s most loved and revered former ruler – Late HM Sultan Qaboos bin Said as well as the current ruler, His Majesty Sultan Haitham bin Tarik, in their stately splendour. There are paintings which show artefacts and faces that speak volumes about Oman’s cultural heritage as well as those which depict nature’s glory. Some also convey similar aspects about India.
If art interests you, a visit to this gallery to view artist Sheffy’s art can be a time consuming exercise as the exhibits have the capacity to grab the viewer and transport him/her to different places and timezones in an instant. You will actually be left lost in a whirlwind that churns up your ability to comprehend what you see as each exhibit seems to demand equal attention. And you soon realise that the discretion to leave the gallery is now not within your control.
When asked to sum up the essence of this exhibition, Sheffy said, “The message is simple, like life, yet complicated. It’s up to the individual how you look at it. I like to delve on the duality of all existence. Even in our body or within the brain, everything, everywhere, exists in a state of duality (advaitha) but functions as one.”

Not two, but one

If you did not heed the warning about the complexity of this exhibition, here it comes again, from the horse’s mouth. The artist himself chooses to define the entire gamut of his artistic pursuit of the past few decades with one Sanskrit word – ‘advaitha’ which means ‘not two, but one’. The term advaitha conveys the idea that the inner self, or soul, is part and parcel of the ‘absolute reality’ (refering to the creator).
More than one hundred exhibits are on dispay, around 56 on the wall, the rest installed on tables. The artist has used almost all mediums, such as pastels, oil, acrylic and water colours (even in modelling paste/ink and mixed media).
Having created numerous artworks in Oman for the past 27 years, artist Sheffy admits that different aspects of art Oman have cropped up in this exhibition, and whether they are good or bad, they seem to have had a lasting impact on his own mind, if not his colour palette.
When you visit the gallery, marvel at the artist’s prowess with the paintbrush, and take in a few apparent tips about his style and creative flair from the presentation. But, don’t accept any invitations held out by any of the exhibits to transport you through time – that’s a one-way trip you, probably, don’t want to take. (Remember where you’ve parked your car, a little while ago!)