‘Peaceful Yemen essential for the stability of region’ 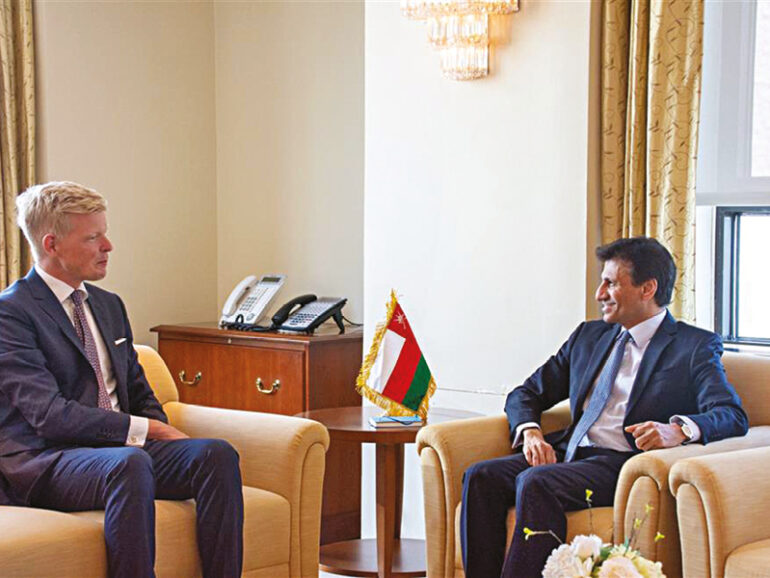 Muscat – The newly appointed Special Envoy of the United Nations Secretary-General for Yemen has asserted that “a peaceful and stable Yemen is essential for the stability of the entire region”, while acknowledging the efforts of Oman towards that direction.

Hans Grundberg praised Oman for its support to international efforts in Yemen, as he was received by H E Mohammed bin Awad al Hassan, Oman’s permanent representative to the United Nations, at the sultanate’s delegation headquarters on Friday.

Both the envoys reviewed the latest developments in Yemen and the international efforts exerted to restore security and stability to Yemen, during their meeting in New York.

In his inaugural address to the UN Security Council on Thursday, Grundberg informed about his upcoming travels to Riyadh for a meeting with Yemeni President Abedrabbo Mansour Hadi and members of the internationally recognised government as well as with Ansar Allah (Houthi) leaders and regional leaders in Riyadh, Muscat, Abu Dhabi, Kuwait, Tehran and Cairo.

“My office and I stand ready to spend as much time in Yemen and with Yemenis as possible,” he said, adding that each month he would “reflect frankly and openly on these discussions” while briefing the ambassadors and seek their “tangible and coordinated support” to take his mandate forward.

In his speech, Grundberg painted a grim picture of six years of unabated armed conflict in Yemen during which thousands of civilians have been killed, displaced, and impoverished as gender-based violence has surged significantly.

“From unrelenting violence to fuel and electricity shortages to surging food prices, every detail of daily life in Yemen is somehow tied to difficult political questions that demand a
comprehensive resolution,” he stated.

“Yemenis all over the country live with severe limitations on their freedom of movement and of the movement of essential goods due to ongoing fighting, checkpoints, road, port and airport restrictions.”
“Enabling a resumption of a peaceful, inclusive, orderly and Yemeni-led political transition process that meets the legitimate demands and aspirations of the Yemeni people, as mandated by this Council, will not be easy. There are no quick wins,” Grundberg said.

“Peace in Yemen will not be sustained in the long term if southern voices do not play a part in shaping it responsibly.”

Moreover, the conflict is spilling across borders, threatening regional security and international waterways, including targeting civilians and infrastructure inside of Saudi Arabia.

“The fighting must stop, the violence has to come to an end,” he underscored.