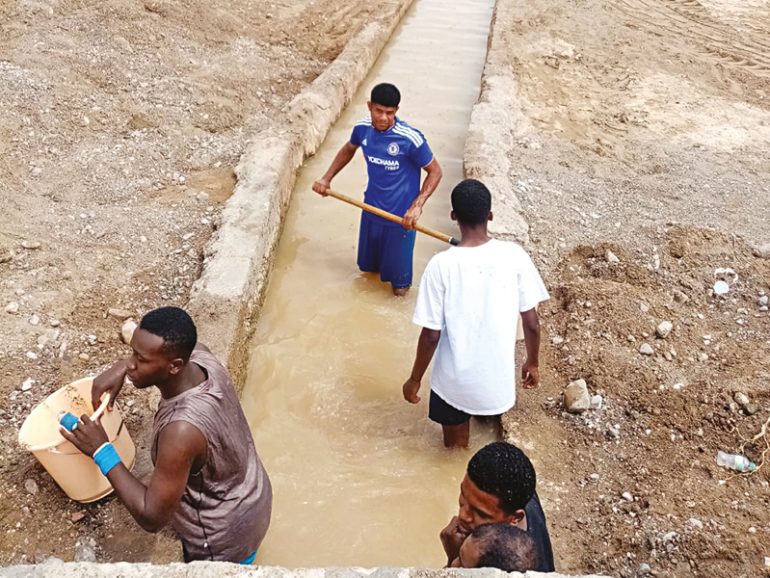 To preserve Falaj al Suwaiqia and support farmers, citizens of Jalaan Bani Bu Hassan have come together to maintain the ancient irrigation system in South Sharqiyah.

Salim bin Amer al Masrouri, who is supervising the maintenance work of the falaj, said, “We are constantly working on fixing it. Falaj al Suwaiqia is a Ghaili type of falaj which receives water from ponds or running water. The flow of water in the falaj is disrupted by mud from Wadi al Batha.”

Citizens rallied and coordinated efforts to remove the mud and blockages, including felled palm trees, from the falaj. Following heavy rains in the governorates of North and South Sharqiyah recently, waste had accumulated in the falaj obstructing its flow. Maintenance work was carried out four times over the period of a month.

“Aflaj are a traditional water source for irrigation on which Omanis have depended for ages,” Masrouri noted.

Talking about the challenges the citizens faced in their effort, Masrouri said, “Following rains, the falaj is filled with mud as deep as 4m. The falaj needs a month and a half to repair.

We spent approximately RO8,000 to repair it. Around ten youngsters worked in teams to remove the mud and blockages from the falaj.”

The work required heavy equipment to dig an alternative course for the water in order to speed up the maintenance work.

Jaalan Bani Bu Hassan has seven aflaj systems of which four are Ghaili and three Dawoodi.

“Citizens are appealing to the Ministry of Agricultural, Fisheries and Water Resources to maintain Falaj al Suwaiqia in order to end their suffering,” Masrouri said.

There are 4,112 aflaj in the sultanate. The aflaj are categorised into three main types – Dawoodi, Ghaili and Ayni.