We expect Oman to deliver a top-class event: AHF CEO 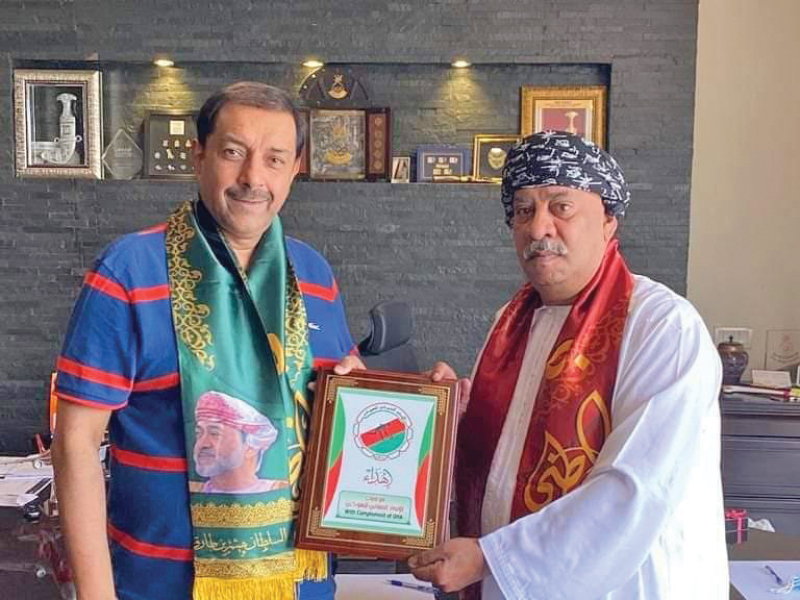 It was a close fight with hockey heavyweights India and Pakistan also in the fray. But, Oman on Thursday, staged a coup of sorts, as they won the hosting rights for the inaugural FIH Hockey5s World Cup (men and women), to be played in Muscat in January 2024.

The decision to award Oman the bid was based upon a recommendation from the FIH Events Bidding Task Force (comprising of executive board members of all five continental federations) and the executive board (EB) of the International Hockey Federation (FIH).

Heading the task force was Asian Hockey Federation (AHF) general secretary and chief executive Dato Tayyab Ikram, who has been a  votary of popularising the game across the continent and taking the sport to new regions.

In his exclusive remarks to Muscat Daily from Islamabad (Pakistan), Ikram, the AHF CEO said, “It is a special thing for Oman to win the inaugural edition of the FIH Hockey 5s World Cup. It is a moment of pride for Oman  and Oman Hockey Association (OHA), who has been promoting the game for decades. I have closely followed the development of Oman’s hockey and I am happy to see that Muscat has been awarded the rights to host the FIH flagship hockey5s event.

“This is the first time that the world governing body has introduced the competition for both, men and women.”

Ikram, who is also a member of the FIH executive board said, “I would like to congratulate His Majesty Sultan Haitham bin Tariq al Said for his support to sports in Oman and also greetH H Sayyid Theyazin bin Haitham, Minister of Culture, Sports and Youth, for his support to the game of hockey. We, at the Asian hockey believe that they can deliver a world-class event. To have it in Oman also underlines our goal of taking the World Cup to new regions to boost the game.

“OHA, under the leadership of captain Talib al Wahaibi, has been very enthusiastic about the bid and has worked hard to prepare a top-class bid. I am confident that Oman will be ready for this milestone event.

“OHA and the government of Oman are capable of creating top-class facilities for athletes ahead of the World Cup. Asian hockey will provide all support to achieve this as the success of the inaugural hockey5s World Cup in Asia is paramount for all of us,” said Ikram.

It may be mentioned that, besides India and Pakistan, Singapore was also in the fray to host the prestigious tournament.

The new brand of hockey has become very popular and the continental qualifiers for the hockey5s World Cup will be held in 2022. The World Cup will feature 16 teams per gender, with three featuring per continent. Oman will qualify for the event as the host nation.

Ikram lauded the efforts and persistence of Wahaibi along with his dedicated team of OHA and AHF board member Zuhair al Ajmi and OHA international relations manager Shakir Munir.

Wahaibi said, “I am very pleased and delighted. We will happily undertake this great responsibility to deliver the first-ever FIH Hockey5s World Cup at the highest possible standard.

“We will build state-of-the-art facilities and provide best conditions for the athletes. It is a matter of great pride for me, Oman, and Oman hockey. Our sincere gratitude to FIH for giving us the responsibility of hosting the Hockey5s World Cup for men and women.

“Winning the rights to host this innovative and attractive hockey tournament will open up great horizons and showcase Oman around the world.”

Oman’s strong bid was prepared with the help of Oman Sail, which has the expertise in hosting world championships in the sultanate in the past. The teamwork that went into the preparations of Oman’s bid was another example of how various stakeholders could join hands to ensure the success of a project.

Wahaibi, Ajmi and Munir had travelled to Pakistan before the announcement. They put up a strong case to the AHF chief executive and then managed to convince the FIH events bidding task force and the executive board to award the maiden Hockey5s World Cup to Oman.

As part of the Hockey5s World Cup bid, a new 5,000-seater stadium will come up next to the existing hockey stadium at the Sultan Qaboos Sports Complex.

Both the stadiums will have new blue turfs with the existing turf to be removed.

With the event to feature men and women, a top OHA official confirmed that they will start a full-fledged programme for women’s hockey. “We will make it a top-priority and not only launch a team for young girls but also build a team that can take part in the World Cup in 2024. We are serious in promoting hockey among women in Oman,” he said.

Meanwhile, Tahir Zaman, former national team coach and Pakistan great, denied media reports that he has signed a new deal with OHA. Zaman, a World Cup winner, told Muscat Daily on Saturday from Pakistan, “I have yet to sign a deal with the OHA though they have approached me.

“I  congratulate Oman on winning the bid to host the first-ever Hockey5s World Cup.”

Zaman earlier coached Oman from January 2018 to May 2020. Since his departure there has been nonational team coach.

‘Boost to the game in the region’

In a press statement, FIH CEO Thierry Weil said, “We’re looking forward to a wonderful inaugural FIH Hockey5s World Cup in Oman. This surely will be a great boost for the promotion of hockey both in the country and in the whole region. We’re convinced that Hockey5s will play a key role in the growth of hockey worldwide. This is why this World Cup has been created, as well as a Hockey5s World Tour which we are currently working on.”

In 2019, the FIH executive board decided to create an FIH Hockey5s World Cup, with a view to further boosting the development of hockey globally through the promotion of its five-a-side format.

Hockey5s is played with five players per team with two halves of ten minutes each on a smaller pitch. It is particularly known for its non-stop end to end action, since the ball is in play for about 90% of a match, thanks to rebound-boards placed against the outside of the side-lines and back-lines. Furthermore, there are usually more goals with Hockey5s than with the more traditional 11-a-side format of hockey, since players can score from anywhere after the attacking line.

Played in about 70 countries in the world, Hockey5s was the most attended sport at the 2018 Youth Olympic Games, in Buenos Aires, Argentina, with no less than 200,000 spectators.