Beauty of the ‘bindi’ 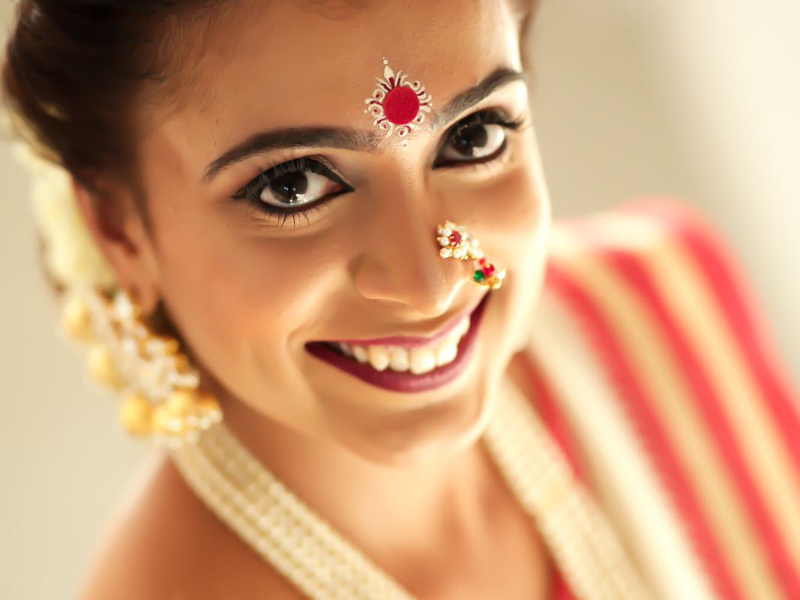 The traditional dot of vermillion, worn by Indian women as an essential accessory of their attire, hasn’t quite received a beating, despite overwhelming cultural influences from the world over the past few decades. There are many who still romance this dot as an essential part of their attire as well as personal style, and also induce others to follow suit.

What originated as a symbol of a married woman, and was traditionally created with red vermillion powder dabbed on the forehead with the finger, has taken on multiple forms, most of which are a ‘stick-on’ accessory in numerous hues as well as with embellishments that vary from beads to real diamonds.

It is said that the area between the eyebrows, where the bindi is placed, represents ‘ajna’ – the sixth chakra – considered the seat of concealed wisdom. And the bindi, when placed here, is said to retain energy and strengthen concentration.

Ancient Indian sages had described various areas of concentrated energy in the body called chakras. There are seven main chakras that run along the center of the body, and the sixth one called the ajnachakra – the brow chakra – is located exactly where the bindi is placed.

The term ‘bindi’ is derived from the Sanskrit ‘bindu’, which means dot, drop or particle. Bindis are also known as kumkum, sindoor, teep, tikli and bottu in different Indian languages.

While the bindi is typically part of Indian attire, there have been instances when foreign celebrities, including a few from Hollywood have, indeed, sported the bindi with Indian as well as Western outfits to create a flutter among social circles. Girls in Indian metros often sport bindis with jeans/trousers and tops while there are some who are not fond of wearing bindis even with sarees or other traditional Indian attire.

Though bindis are not really a fashion statement, they tend to complete the traditional Indian woman’s attire. In fact, it is an essential element in the popular ‘sola shingar’ (16 aspects of a woman’s act of dressing up for a festive occasion). However, some women tend to make their typical choice of a bindi (by virtue of colour, size and shape) as their own signature style, without which something would be perceived as ‘missing’ in their appearance.

The most popular bindi worn by women, primarily in semi urban and rural areas is the simple red, circular dot, about 1cm in diameter. This is also the most popular bindi in urban areas and metropolitan cities, though the size tends to get smaller and smaller to suit convenience.

This is a Maharashtrian style bindi which has a crescent shape with a dot in the centre. This pattern usually adorns the forehead of Marathi women and was known as Chandra bindi. According to folklore, it was also popular among kings and queens in the various kingdoms in erstwhile India.

These involve various geometric shapes from triangular, square, and rectangular to multidimensional shapes with embellishments of various types that give them an ornamental look and are worn on festive occasions.

This bindi comprises a vertical shape of line that is intended to balance the contours of the shape of the face. Vertical bindis are mostly suitable for those with roundish faces to make them look elongated. The vertical bindis can be shaped as pyramids, ellipses or tear drops and are often combined with intricate dots and curves. There are also variations of this which resemble a vertical snake.

Tribal bindis are usually a work of art and painted with liquid bindi dyes in red, black, green and white. They are a combination of the red dot in the centre with various shapes like crescents, stripes, dots, placed around it, creating a tattoo of sorts on the forehead. Some tribals also tattoo such bindi shapes on the forehead as well as the cheeks, neck and arms. Tribal bindis are worn by women to suit specific attire worn for festivals or religious ceremonies as well as for cultural stage performances.

These are a combination of bindis of various sizes and shapes put together in close proximity or over each other to create unique, layered patterns. They also form the base of ornamental embellishments and are usually worn with designer Indian outfits for special occasions.

Though some prefer the simple, traditional red dot, modern versions of bindis worn by brides comprise ornamental bindis, prepared with layers as well as embellishments of sequins, beads, gold thread, gold dust, even diamonds. The pattern and shape is created to match the colour and print of the bridal attire. Often these are combined with traditional designs on the forehead which are typical Indian bridal makeup.

Bright in an instant

“I always wear bindis when I’m wearing Indian outfits – not for any religious reasons but because, in one second, thin tiny red dot brightens up my face. It is the easiest, simplest, most cost-effective accessory to wear.

I think, some western women do experiment with the bindi – especially those who are aware of Indian culture and like wearing Indian-inspired clothes. Perhaps, lack of availability abroad is one reason why it has not caught on as a popular fashion trend in other countries.”

Lights up my face

My love for bindi is very straightforward and simple. It has to be round and it has to be fairly big. Statement making big! The colours could vary somewhat but the three most preferred ones are maroon, red and black. I love wearing saris and whenever I wear them, rarely it is without a bindi.

To my artistic sensibilities a face without a bindi, while donning a sari, is like a resplendent flowering plant without the flowers. It simply lights up my face when I do so, just as much as the kohl does, too.

I have to concede that I never could associate this accessory with western clothes. On rare occasions, when I have seen girls sporting a small bindi while in jeans and Ts, I have literally cringed. But then Gwen Stefani of the rock group ‘No Doubt’ sports a fancy bindi, it works. I have also seen Selena Gomez and Madonna do so during their rock concerts.