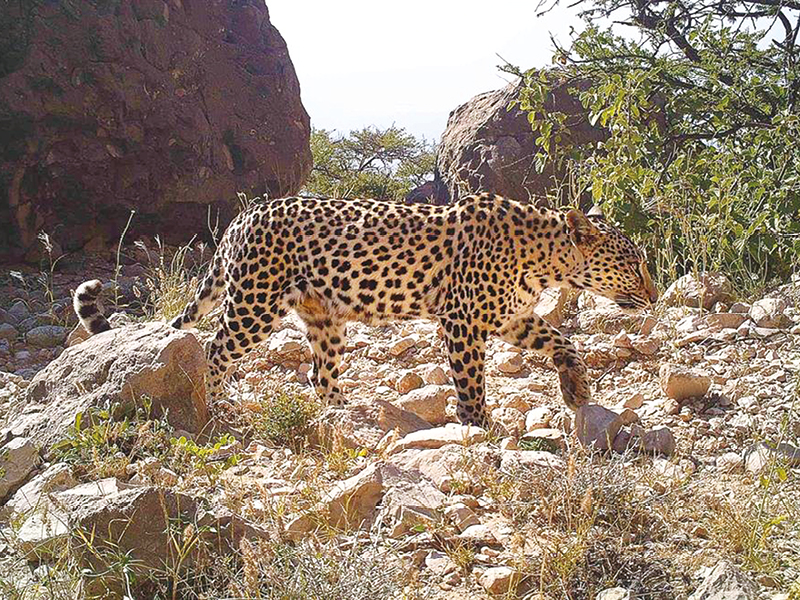 A recent study carried out by the Office for Conservation of Environment (OCE) at the Diwan of Royal Court, represented by the Environmental Affairs Department in Salalah, has revealed a new scientific breakthrough, confirming the presence of the Arabian leopard in the Harweeb region, north of Jebel al Qamar, in Dhofar governorate.

This scientific documentation is considered a success and a continuation of the relentless efforts made for conservation of this rare and critically endangered animal, stated OCE.

‘This registration represents an increase in geographical spread of the Arabian leopard in Dhofar governorate, a sign of positive indicators on the survival of the species,’ it said.

The office said that during the past 50 years, there was no evidence of the presence of Arabian leopard in these areas with the exception of Jebel Samhan, but in 2014 the team from OCE was able to monitor the presence of it in Al Najd in the area north of Jebel al Qara.

The Arabian leopard is a rare breed of feline that inhabits the Arabian Peninsula and has been classified by International Union for Conservation of Nature as being critically endangered.

This rare animal is found in the sultanate in the Governorate of Dhofar.

The field studies carried out by the OCE for the last many years confirmed the presence of the Arabian leopard along the mountains of Dhofar from Hasik in the east to the wilayat of Dalkhut in the west, in addition to spotting it in the previous years in some areas of Najd, north of the Dhofar mountains.

The sultanate, represented by the Diwan of Royal Court, is making great efforts to preserve and protect the Arabian leopard from extinction. These relentless efforts have contributed to the stability of its numbers and the preservation of the sustainability of its natural habitats in Dhofar.