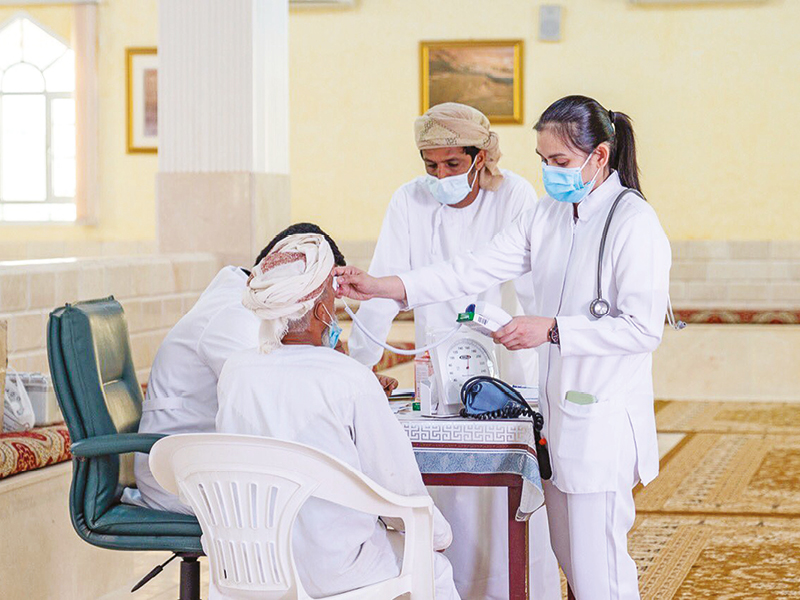 Authorities are stepping up efforts to remind people about the preventive measures as COVID-19 cases continue to rise. The number of deaths related to the virus has increased in the last few days.

According to Ministry of Health (MoH) figures, the COVID-19 death toll in the country rose to 1,728 after six deaths were reported on Tuesday.

‘On Monday, 1,208 new cases were reported, taking the total to 165,482, while the number of recoveries has reached 148,303,’ an MoH statement said, adding that 623 patients were admitted in health institutions, including 196 in intensive care.

‘MoH, represented by Directorate General of Health Services in Muscat, calls upon visitors to adhere to the precautionary measures when they enter health institutions. The target groups will be contacted in advance to take the vaccine according to the appointment system set up by the vaccination centres in the governorates,’ the statement said.

Meanwhile, the authorities are cracking the whip on offenders who violate the Supreme Committee order banning all types of gatherings. On Tuesday, Royal Oman Police arrested a group of people for violating the decisions of the Supreme Committee during the period of nightly closure and movement ban.

‘Buraimi Governorate Police Command arrested a group of people for violating the decisions of the Supreme Committee during the movement ban.

Legal proceedings have been initiated against them,’ an ROP statement said.

According to Public Prosecution, the decision to publish photographs of people who violate the Supreme Committee’s directives has been effective.

“There has been a decrease in the number of reports received of violators of the decisions of the Supreme Committee after we started publishing photos of violators,” H E Nasr bin Khamis al Sawai, Public Prosecutor, said on Tuesday.

No action on defaulters who lost jobs

Following the Central Bank of Oman (CBO) outlining incentives stated in the Economic Stimulus Plan, Public Prosecution has said it will not take action against any person who is proven to have lost his or her job due to the current circumstances brought by the COVID-19 pandemic.

On Tuesday, H E Nasr bin Khamis al Sawai, Public Prosecutor, said, “Those in such a situation will be given an opportunity and the time to regularise their situation. There is consideration in this regard provided they have the proof.”

Last month, the CBO instructed banks, finance firms and finance leasing companies to continue granting a 12-month grace period for all borrowers, with effect from the date of termination of their services. The CBO also instructed these businesses to postpone repayment of loans of low-income employees for an additional period of six months till the end of September.